What difference can Ireland really make on climate change? 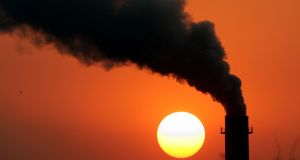 “A national dialogue on climate change will be the basis for concerted action and, I hope, consensus on the major cultural, political and technological advances required to tackle it.” Photograph: Reuters/Kamal Kishore

The “global” in “global warming” summarises the incontrovertible science underlying the threat facing the planet. It is also, in its vastness, daunting, even discouraging. How can any one country, especially a small one, make a difference? How can any one of us meaningfully contribute?

It is the task of politics – one I am applying myself to daily – to bridge the chasm between the global challenge, national responsibility and Ireland’s obligation, and the responsibilities of all of us as citizens. The saying “one cannot change the world” may be tired. On climate change, it is a pressing fact that the world will not change without any of us.

On Thursday I will present Ireland’s first Annual Transition Statement to the Oireachtas as required under our Climate Action and Low Carbon Development Act, 2015. This represents an important stock-take of where we are on our journey to a low-carbon, climate-resilient and environmentally sustainable society by 2050.

The Climate Act commits us to reducing greenhouse gas emissions by at least 80 per cent, across electricity generation, buildings and transport, by 2050. In addition, we are pursuing an approach to carbon neutrality in agriculture that does not compromise our capacity to sustainably produce the food we need.

All of this will involve fundamental changes in how we live. Climate policy will constantly evolve to meet changing circumstances and emerging new challenges, and will be based on a series of national plans prepared by Government over the period to 2050.

The heat is on

Our planet is heating up, and we are the dominant cause. Global average temperature have increased by 0.85 degrees since 1850. The atmosphere and ocean have warmed, the amount of snow and ice has diminished, and sea levels are rising as the concentrations of greenhouse gases increase.

So climate change is decades old. Its causes are deeply embedded in our way of life. Sustaining what we know against the detrimental change that is wreaking a cost in Ireland already requires that we change before climate change changes everything irrevocably.

Where is Ireland now in terms of emissions? The latest projections from the Environmental Protection Agency indicate that emissions for 2020 could be 6-11 per cent below 2005 levels, against our legally binding EU target of a 20 per cent reduction. This shortfall reflects our constrained investment capacity for more than a decade, from 2008-2019.

Due to the economic crisis, we will not meet our 2020 target, which was in any case inappropriate in terms of cost-effectiveness.

I recognise the importance of meeting the challenges Ireland faces on climate. As the first ever Minister for Climate Action, incorporating responsibility for both environment and energy, I steered Irish ratification of the Paris Agreement through the Dáil, completing the process on November 4th.

This UN agreement seeks to limit the temperature rise to well below 2 degrees above pre-industrial levels, with an ambition to pursue efforts to limit the increase to 1.5 degrees. It is not just a blueprint for the future; it is also the best hope for any future. If that sounds apocalyptic, it is a fact.

A range of climate action plans, known as nationally determined contributions (NDCs), will address 95 per cent of the world’s emissions. Ireland will make a technically feasible, cost-effective and fair contribution to this global effort via the NDC tabled by the EU on behalf of member states. It commits to at least a 40 per cent reduction in EU-wide emissions from 1990 levels by 2030, based on reductions in the emissions trading system (ETS) sector of 43 per cent and the non-ETS sector of 30 per cent.

Energy and climate action are inextricably linked. Using less energy more efficiently is the most cost-effective and accessible way for us all to take action on climate change.

A significant start was made in Budget 2017. More than €100 million is earmarked for investment in energy projects, which will save more than 116,000 tonnes in carbon emissions every year. These will support some 3,000 jobs, and reduce our overall dependence on imported fossil fuels. And €7 million is being allocated to kickstart a new renewable heat incentive and the biofuels industry.

Global issues almost too huge to grasp can be distributed as opportunities and as obligations – one household, one business, one country at a time – across the world. That is the political action required.

Next week I will announce a public consultation on Ireland’s first national Mitigation Plan, which must be prepared by June 2017. In addition, I will publish an initial consultation on a Clean Air Strategy for Ireland with a view to developing a plan that will protect our health and improve the quality of the air we breathe. All these elements will be a key part of Ireland’s National Climate Dialogue, which I will formally launch early in the new year.

A national dialogue on climate change will be the basis for concerted action and, I hope, consensus on the major cultural, political and technological advances required to tackle it. Our young people will be central to this. It is they who will inherit the consequences of our actions today, and our collective ambition cannot fail them. They will live in the transformed, sustainable economy of the future, underpinned by green growth and jobs.

Alternatives for the displaced

In making this enormous transition, we must also be mindful of today’s reality. We must harness the potential of the green economy to create alternative jobs for those working in industries that, over time, will become displaced. In this regard, I am planning a transition from peat-fired electricity generation to generation supported by indigenous sustainable biomass. New jobs will replace old, and our rural communities will be sustained and prosper.

It is only if we manage the change in this way that we will maintain the faith of civil society and bring people with us in addressing the threat to our planet and our country.

Denis Naughten is the Minister for Communications, Climate Action and Environment.

1 ‘I wandered around Dublin wondering: Is this what they call a capital city?’
2 Simon Coveney: Risk of nuclear catastrophe is unacceptably high
3 John Hume’s socially distanced send-off a fitting end to the life of a ‘great servant’
4 Teenage boy dies at Powerscourt Waterfall in Co Wicklow
5 Gardaí surrender 13 people to Polish police
Real news has value SUBSCRIBE