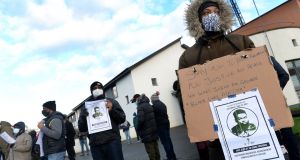 A protest outside Blanchardstown Garda station over the killing of George Nkencho. Photograph: Dara Mac Dónaill

Why is it so difficult for people to even consider whether there may have been a racial dimension to the fatal shooting of 27-year-old George Nkencho by gardaí in the front garden of his family home in Clonee, west Dublin, on December 30th? The answer to this question lies in the answer to another: are you a racist?

There are many who argue that the shooting appears to have been a justified and proportionate action by gardaí responding at the scene. The nub of their argument being that George was a dangerous criminal.

Those who hold this view are probably relying on early news reports that George had allegedly gone into a local shop to commit armed robbery and whilst inside the shop he assaulted members of staff and shoppers.

We don’t know if the colour of his skin played any part of what happened to George, but we should not avoid asking the question

These reports and various social media posts in the immediate aftermath of the shooting portrayed George as an uncontrollable criminal who had 32 prior convictions and was out on bail having been accused of assaulting his ex-girlfriend with a hammer. Fake pictures of the shop worker who had been allegedly brutally assaulted which circulated on social media only served to confirm this impression.

Years of black men being portrayed in the media as violent criminals also paved the way for the easy acceptances of a narrative that George was a criminal, and that his shooting – six times – did not require deeper scrutiny.

It is precisely because of racial prejudice that many were quick to accept the label “thug” being applied to George in some news reports and on social media . Thug is a particularly loaded term in the context of young black men.

We know now, of course, that those early reports and social media posts were gravely false and misleading. So misleading one may argue that their publication could amount to an incitement to hatred.

“George had no prior convictions,” shouted one headline, and suddenly, the conversation changed. The evidence of George’s “thuggery” was ill-founded.

The narrative of the shooting shifted from “he deserved it” to “the gardaí tried, they failed, so they had to shoot him”. But not to “was his shooting lawful?”

So tainted is our perception of black men that we all too easily justify their misfortunes, incarceration, unemployment, brain waste, and even killings without due regard to an assumption of innocence or, in George’s case, the possibility that the Garda Síochána may have been at fault.

The possibility that a black man behaving in a violent manner might be going through a mental health breakdown is very far removed from our perceptions of black men.

The Garda ombudsman is investigating the shooting. We don’t know if the colour of his skin played any part of what happened to George, but we should not avoid asking the question.

The difference between a racist and an anti-racist is that an anti-racist notices race in the circumstances surrounding an event such as the shooting of a young black man and demands truth, knowing and acknowledging that there exists a racial stratification in our society.

A racist seeks evidence (real or otherwise) to support their own prejudiced notion of truth. Their prejudice and unchecked unconscious bias makes them easily susceptible to accepting misinformation and disinformation about the circumstances surrounding the shooting of a young black Irish man.

It is difficult for many people to accept that not questioning whether a racial bias had an influence on the shooting of George is problematic.

They are quick to assert their neutrality and dismiss the question. They proclaim “I don’t see colour” as though these magic words absolve them of any moral responsibility. It is a defence mechanism that allows them avoid engaging in an uncomfortable exercise in self-reflection.

Remaining neutral is not only a cowardly act but a clear acknowledgement and display of the social privilege that renders white people oblivious to racial stratification in our society. Silence is compliance.

If you fail to acknowledge difference, you fail in your duty as a good citizen. Democracy works when the minority consents to governance by the majority in return for recognition of equality before the law.

Although equality demands neutrality, history informs us that equity is what is often needed to achieve equality. To do so you must acknowledge privilege and be brave enough to battle with dissonance when met with the question: are you a racist?

You may find that you are indeed a racist. It’s okay to take offence or be disheartened or both. Taking offence over an allegation of racism is the first symptom of racism.

Now all you need to do is find a cure. It starts by perceiving the question of racism not as an attack but as an opportunity to self-reflect and check one’s own bias.