Lessons must be learned from costly errors made from the outset 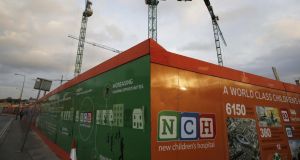 With decades of history under its belt since first mooted, the National Children’s Hospital (NCH) has spawned a tragicomic mythology of its own:

(a) how former taoiseach Bertie Ahern dreamed of a Bertie Bowl-like children’s hospital beside the Mater hospital – and his St Luke’s constituency headquarters;

(b) how the decision was changed at the 11th hour in 2006 from St James’s Hospital to the Mater hospital in a murky subplot worthy of John le Carré;

(c) how the decision was similarly changed again in 2012 from a site beside St James’s Hospital to within the hospital’s perimeter;

(d) how those in the know said from the outset that it would cost more than €1 billion to build on its current site;

(e) how it will have a performance space big enough to host a symphony orchestra so that Mozart and Beethoven can do their bit for fundraising;

(f) that it will bring riches beyond measure in investment and prestige to the adult hospital that hosts it;

(g) that traffic-jam concerns will be solved by a free-flow transport plan – the likes of which Brexiteers facing border hold-ups can only dream of;

(i) that it will have a double entry in the Guinness Book of Records as the most expensive hospital to both build and run in the world;

(j) and that a tribunal to unravel the astronomical expenditure will cost more than the hospital itself and take longer to complete – and therefore would not be worth the effort.

Sadly, sick children are neither seen nor heard in this narrative – nor in the latest outcries of indignation.

By the time the most expensive hospital in the world opens its doors, some children will have died and suffered whose fate might well have been different if this world-class hospital had been built on time. For parents and families, this cost is beyond the calculation of accountants.

With neither money nor space, plans for a trilocated maternity hospital are now a pie-in-the-sky fantasy.

In every myth there are grains of truth. Finding them, however, will be important – if we are to learn from the serious mistakes that have been made.

For many, the mere mention of the project of is enough to put them into a tailspin. What should be inspirational and iconic has become embarrassing and farcical.

Children were hardly mentioned. Detailed cost analysis was not an issue

The chopping and changing of names only serves to raise more hackles and is emblematic of a project that has lost both its identity and its way. Perhaps Samuel Beckett’s The Unnamable gives us the best clue as what we should call the hospital.

A novel that opens with “Where now?” seems to put the current existential crisis in a nutshell. The recent proposal to sell names of parts of the hospital just adds insult to injury.

Writer and comedian Eleanor Tiernan recently highlighted the unsavoury implications of Ronald McDonald’s sponsorship of on-site accommodation for parents and families of children in hospital .

So who is to blame? Commentators have described how a Kafkaesque bureaucracy allowed escalating costs and missed deadlines to fall between ministerial, departmental, Health Service Executive, hospital group and development board stools.

Eyes were not kept on a ball that appears to have been kicked from Billy to Jack. But there’s another nettle that needs to be grasped – and that’s the Machiavellian nature of medical politics.

Those of us involved in the process will recall how it degenerated into an unseemly slugfest between heavyweight adult hospitals and associated academic institutions.

Wagons were circled, allegiances sworn and party whips cracked. Independent-minded paediatricians who spoke up for children were often ignored or ridiculed or ended up being caught in the institutional crossfire.

I remember being invited to a high-powered meeting shortly before the cabinet’s November 2012 decision on location.

Around the table, medical consultants and senior hospital managers openly gave their views on how another shortlisted hospital “would just have to be taken out of the running” – through lobbying.

Children were hardly mentioned. Detailed cost analysis was not an issue. An appeal to act in “the national interest” fell on deaf ears. The main priority was to nail the decision to the site in question – come hell or high water.

It’s too late now to stop the Kango hammers drilling, there’s a pressing need to take a serious look at how the decision on location was taken

Of all the figures and statements that have been bandied around in relation to the hospital on its current site, there are two that jump off the page: “very limited decanting requirements and thereby prompt access to site for development commencement (<6 months)” and “Total Estimate Construction Costs = €297,750,000”.

These come from the submission of St James’s to the Dolphin review group in April 2012. When things go wrong, it’s often because shaky calculations are made at the start.

And although it’s too late now to stop the Kango hammers drilling, there’s a pressing need to take a serious look at how the decision on location was taken – as well as what happened afterwards.

The NCH will be a stone’s throw from St Patrick’s, the hospital Dean Swift managed to get off the ground in double-quick time – even though he was dead. I wonder what our most scathing satirist would say if he could see the Lilliputian shenanigans next door.

The next time we build a hospital, let’s not forget who it’s for.

Prof Chris Fitzpatrick is a consultant obstetrician and gynaecologist and former master of the Coombe hospital. He was the principal author of the proposal to locate the NCH on a derelict site adjacent to the Coombe hospital and St James’s Hospital