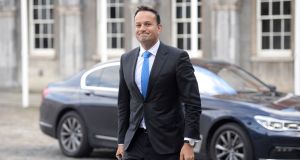 A much-cherished character has returned of late who has been missing for the past few years. It’s Straight-Talking Leo, a persona who provides a much-needed service of telling it exactly like it is.

Straight-Talking Leo disappeared around the middle of 2017. For much of the previous decade he had acted as the public conscience of Fine Gael, giving a firm centre-right perspective on the world. Indeed, within a week of first being elected in 2007, Varadkar (then 29) had the temerity to rile then taoiseach Bertie Ahern, repeating Charlie’s Haughey’s words that he was “devious and cunning”.

Over the years Varadkar shared views that were off-message and sometimes led to clashes with his own colleagues. The most remembered is his intervention in the Garda penalty points controversy in 2014. The acts of whistleblowers Sergeant Maurice McCabe and Garda John Wilson had been branded as “disgusting” by then Garda commissioner Martin Callinan. Varadkar described both men as “distinguished”. His comments brought back pressure on then minister for justice Alan Shatter.

When Varadkar disclosed publicly he was a gay man in 2015 the Irish Examiner’s Mick Clifford wrote memorably: “The reason Varadkar may never be taoiseach is not because he’s gay but because he’s straight.”

In interviews Varadkar would pointedly say he had a reputation for being straight-talking. You have to take this in context.

For sure, Varadkar did not tend to use the evasions that other politicians did. And the image of a refreshing candid politician who was up-front with his views did him no harm.

At the same time it wasn’t as if he had taken a truth serum, and had to blurt out the unpalatable truth at all times. There was a bit of artifice to the image. He was straight-talking when it suited him. You could say that the genius of his spin was he made himself appear unspun. And, of course, he did become taoiseach.

A few days before the Government decided on a “green list” (a Fine Gael idea) Varadkar issued a statement questioning the efficacy of a list if the number of “green list” territories was minuscule.

On the withdrawal of pandemic unemployment payments (PUP) to those going abroad, it was he who also disclosed the Department of Social Protection gets information from airports on social welfare recipients.

In an angry Dáil row on speaking rights, he launched a no-holds-barred broadside at smaller left-wing parties. “You shout us down in the same way you bully people online. Day in and day out you try to bully people in here because they come from a larger party or a Government party.”

This isn’t spontaneous. This is a deliberate strategy of a confident party and leader asserting themselves. It reflects the unusual nature of this administration, and the almost equal number of seats held by the two bigger parties.

In Irish coalition arrangements there is a pattern that you can’t argue against, and it is that the smaller party will usually take the brunt of the damage in the next election.

When Labour has gone into government with 30-plus seats in the past, it has tried various means of countering this “mudguard” phenomenon. It put in programme managers, created a well-staffed office of the tánaiste with delegated powers, ensured Labour policies were foregrounded. It never worked.

The posters may have said “Gilmore for taoiseach” but despite the effort the tánaiste role remained markedly subservient to that of taoiseach for Eamon Gilmore, for Joan Burton, and for Dick Spring before them.

It’s different this time around. Varadkar is Tánaiste, but not in the same way as Simon Coveney was, or Gilmore was. His relationship with Micheál Martin is more akin to the office of First Minister and Deputy First Minister in the Northern executive – a co-leadership, with Martin, for now, being first among equals.

Miriam Lord’s quip last weekend on the star sign of Martin’s birthday – “the Taoiseach is a Leo” – was so good precisely because it had the ring of truth in it.

Varadkar is no longer taoiseach, and no longer spancilled in what he can say. As a partnership government, he, as Fine Gael leader, does not have to defer in the same way as his predecessor tánaistí.

In the past it was the likes of Dan Boyle (for the Greens) and Michael McDowell (of the Progressive Democrats) who sniped from the back benches trying to keep their parties honest in government. Now the moral conscience part is being delivered from the front.

Fine Gael – perhaps thanks to a decade’s worth of experience – has had the strongest start of the three coalition parties. While Varadkar and Martin have gelled well and the relationship has been “smooth”, there have been reports of tension in the Cabinet over the “green list” and over PUP payments. It seems to divide on ideological lines, with Fine Gael on one side, and the other two on the other side. That narrative suits Fine Gael perfectly.

It’s early days yet. But already there is a fascinating question. Can Varadkar elevate the office of tánaiste to something it was not before, and arrest the slide associated with party number two in office?

If he does succeed, a paradox might flow from it. It is this: Martin becoming tánaiste in 2022, rather than being Taoiseach now, might provide the best possible means for Fianna Fáil to curb Sinn Féin’s rising tide and his own party’s demise.