Stephen Collins: Both sides are reluctant to accept assurances without precise legal backing 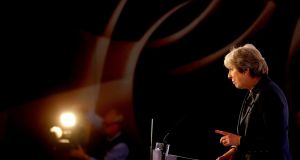 While the mood music from Brussels in recent weeks has been good, it is still too early to say whether Theresa May will get the EU to agree to a deal based on the Chequers proposals. Photograph: Frank Augstein/Pool via Reuters

With the Brexit talks entering their final phase after today’s EU summit in Salzburg, the central dilemma facing Ireland remains: how to reconcile the requirement for a robust Border backstop with the overriding imperative of a trade deal between the EU and the UK.

It is not too far-fetched to hope that some variation of Theresa May’s Chequers plan involving the UK agreeing to remain in a single market for goods but not services can be agreed with the other EU member states.

Such an arrangement would solve most of Ireland’s problems and would turn the backstop into a purely theoretical fallback position and would never need to be invoked. The problem is that the wide divergence between the Irish and British positions on the backstop and what it should contain have the potential to scupper the chances of a trade deal.

That would leave this country with the worst of all worlds having to deal with a disruptive new border on the island and coping with a severe shock to trade between Ireland and the British mainland which would have severely damaging implications.

The Republic and the UK stand to lose far more than anybody else if there is not a deal and the chances are that this harsh reality will ultimately force some form of compromise. The danger is that in such high-wire negotiation, where all sides are testing each other’s limits and bluffing to a greater or lesser degree, an accident could happen that could tip the whole thing over the edge.

The Irish Government is not directly involved in the talks between the EU team led by Michel Barnier and the UK government but its views have a direct bearing on the attitude being taken by the EU side.

One undercurrent that influences thinking, not just among Irish officials but throughout the EU, is the notion of “perfidious Albion”. This is something that goes back centuries and was famously articulated in the 19th century by Lord Palmerston who declared that England didn’t have friends it only had interests.

To be fair, in more recent times the British government has honoured its word on the Anglo-Irish Agreement, despite Margaret Thatcher’s reservations, and the two governments have stuck together in an effort to try to resolve the ongoing difficulties in Northern Ireland.

That means there is a reasonable basis for trust but there is still a wariness about accepting assurances unless they are backed up by precise legal language. Both the UK and the EU agreed last December on a firm commitment to avoid a hard border but finding a way of giving effect to that commitment is the problem.

The EU proposal was a border down the Irish Sea but that provoked strenuous opposition not just from the Democratic Unionist Party but from the British government. Similarly, the British counter proposal that the entire UK should feature in the backstop was never a runner as it would undermine the basic integrity of the EU.

In recent months Barnier has been working hard to “dedramatise” the backstop it with detailed discussions about extending current arrangements for an all-Ireland approach to animal health to other areas.

“What we are talking about here is not a land border, not a sea border, it is a set of technical checks and controls. We respect the territorial integrity of the UK and we respect the conditional order of the UK,” he said on Tuesday.

Ultimate agreement will require flexibility all round and that is where Leo Varadkar and Simon Coveney will face a real test. They got great kudos from the Irish electorate for taking a tough line with the British last December but a more subtle approach will be needed from here on in.

When the negotiations reach their end game, cool heads will be required to strike a balance between the need for a viable backstop, but one that will not put an overall agreement at risk.

At this stage it looks as if the October deadline for an agreement will not be met and, despite Irish reservations, all the focus has shifted to attempting to get to the finish line by the middle of November.

While the mood music from Brussels in recent weeks has been good, it is still too early to say whether May will get the EU to agree to a deal based on the Chequers proposals.

Her real problem will be getting any such agreement through the House of Commons. She put it up to the sceptics in her own party this week by suggesting the Commons will be offered the choice of a deal based on the Chequers proposals or no deal, but the chances are that a number of Tory irreconcilables will vote against her.

It is not just right-wing Conservatives who threaten a settlement. In a cynical move designed for party-political advantage, Labour – whose leader Jeremy Corbyn is more anti-EU than most Tories – has announced it will vote against the Chequers plan. On this side of the Irish Sea there is nothing we can do about internal British politics but only hope that sense will ultimately prevail.