In his bid to become leader of Fine Gael, Leo Varadkar has released a campaign video detailing his agenda if elected. Video: Campaign for Leo 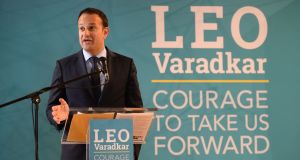 Leo Varadkar’s dog whistles are the most disquieting in this subverted Fine Gael leadership contest. The stuff about supporting people “who get up in the morning”, the complaint about an “entitlement culture”, the binary of people who work hard, create wealth, seeking nothing from the state and those who want everything for free paid for by the “taxpayers”.

Yes, in interviews he has tried to soften this and his “Ideas Paper” has a populist litany of public expenditure promises, that rival anything Fianna Fáil has came up with is at odds with the dog whistle.

But Leo’s Tea Party dog whistles are what Leo is about.

There is much that is simply unbelievable in that “Ideas Paper”. Take the blather in the foreword about joining Fine Gael. He writes: “I joined Fine Gael when I was 17 years old [he was born in 1979, so this was in 1996] not because anyone encouraged me but because I was inspired by its vision for Ireland and its unshakeable integrity.”

The year 1996 happens to have been the year when Fine Gael’s “unshakable integrity” was found out. It was the year that one of the most influential ministers in John Bruton’s government and party, Michael Lowry, had to resign after scrutiny of his tax affairs. It was the year when Lowry secured the award of the second mobile phone licence for Denis O’Brien, who was facilitating Michael Lowry to the tune of £1 million, according to the Moriarty tribunal.

It was the time when Fine Gael got a dodgy campaign contribution that was later ping-ponged between Fine Gael, Telenor and a deceased third party. It was around the time when Fine Gael was found to have been engaged itself in tax fraud by paying some of its employees “under the counter” and when the party facilitated VAT fraud in the notorious “pick-me-up” scheme (donors paying for campaign expenditure directly and then claiming back the VAT on those contributions).

Either Leo was so inspired at the time that he didn’t notice what was going on or he simply has made this up recently to inspire would-be supporters in the leadership campaign. Leo’s populism is more extravagant than that of the “hard left”, as he calls them. Just have a look at what he is promising:

- Reduce constituent poverty to pre-crisis levels and then lower.

- Reduce child poverty to pre-crisis levels and then lower.

- Restore free education by increasing the back-to-school clothing and footwear allowance by 50 per cent over two years.

- Reduce the cost to parents of school transport.

- Substantially increase capital expenditure above what is already promised.

- Establish an “urbanism fund” to improve parks and amenities.

- Create pathways for people who come from educational disadvantage.

- Further expansion and development of primary and social care.

- A new State agency to promote personal and public health and wellbeing.

- Double the budget for arts and culture.

- Establish a commission on congestion

- Establish a commission on local government.

And there is more.

And not a word on how any of this current expenditure will be funded, with the capital expenditure funded by increasing the State debt, however upsetting that may be for our masters, the European Commission.

Simon Coveney’s plans are more considered, even if it rivals Varadkar’s “policy” ideas in banalities. Actually Leo wins that one as well – “taking Ireland forward”, “courage to take us forward” and on and on.

Simon is also all for reducing taxation and some of the populism of the above. His blather is about the Just Society. The Just Society was Declan Costello’s prescription devised in 1964. It seems Simon has never noticed what that proposed, although to be fair to him he wasn’t 17 at the time. That “Towards a Just Society” 1965 manifesto was “hard left” stuff, and all the better for that, but not compatible either now or then with Fine Gael, although in 1965 they pretended it was – more of the “unshakable integrity”.

There are interesting proposals in Coveney’s plan: the anti-corruption and transparency commission commitment; the electric cars idea (all cars to be electric in the mid 2020s); a more considered (but even at that, thoroughly inadequate) spatial strategy; more specific acknowledgement of inequalities than in Varadkar’s plan. All in all, less populist than Leo’s populism and no dog-whistles.

Both candidates set out to subvert the Fine Gael plan to involve the members and councillors in the selection of a leader – this was agreed before the 2002 election by which time Leo, who claims to have been the author of the idea, was barely out of short pants. But the parades of Oireachtas members at the outset of the campaign has sidelined everyone else. Yet more of the “unshakable integrity”.

Leo Varadkar will move Fine Gael even further to the right, with all the cruelties and crassness of Tea Party politics. Simon Coveney, the merchant prince, is less ideologically committed to the people who get up early in the morning.