Suzanne Lynch: Trump attacks on FBI starting to pay off 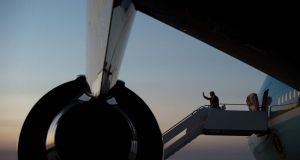 US president Donald Trump disembarks from Air Force One: allegations of an “infiltration” are his latest attempt to discredit the FBI and US intelligence agencies. Photograph: Saul Loeb/AFP/Getty

It may be a sign of desperation, or a natural reaction of a man whose instinct is to crush his adversaries, but Donald Trump’s allegations of a grand conspiracy against him are intensifying as the Russia investigation moves closer to a possible interview with the president.

Mr Trump has long dismissed the Special Counsel investigation into Russian interference in the US election – which is also examining possible obstruction of justice by the president – as a politically motivated “witch-hunt”.

But since the investigation passed its one-year anniversary earlier this month, there has been a renewed effort to discredit the investigation by Trump and his revamped legal team, led by former New York mayor Rudolph Giuliani.

To his critics, Donald Trump’s accusations of a grand plot resemble the paranoid musings of a Shakespearean despot as the investigation moves ever-closer to his inner circle. But there are signs that the repeated claims of a deep-state conspiracy are beginning to have an impact in Trump’s favour.

To his critics, Donald Trump’s accusations of a grand plot resemble the paranoid musings of a Shakespearean despot as the investigation moves ever-closer to his inner circle

This week the Trump team scored an important victory. Deputy attorney general Rod Rosenstein agreed to Trump’s request that the department of justice would expand an existing probe to investigate any irregularities in the FBI’s contacts with the Trump campaign in 2016. Trump and his supporters had seized on reports in the preceding days that an FBI source had “infiltrated” the Trump campaign by contacting three members of the team during the election. Intelligence experts contend that the FBI did nothing wrong – the agency was already investigating allegations of Russian interference in the election and this was part of the probe. But the decision by Rosenstein to accede to Trump’s demands has enraged many Democrats who argue that it lends credence to the latest Trump conspiracy theory and shows an unhealthy over-reach by the president into the work of the justice department.

Allegations of an “infiltration” are the latest attempt by Trump to discredit the FBI and US intelligence agencies. Even before his inauguration as the 45th president of the United States, he denounced the agencies, comparing their practices to those of Nazi Germany. Tensions between the president and the intelligence community intensified after he took office, culminating in the firing of FBI chief James Comey and Trump’s own frustration with attorney general Jeff Session for recusing himself from the Russia investigation. Evidence of anti-Trump text messages sent by two FBI officials during the campaign helped bolster claims by Trump’s supporters that the agency is Democratic-leaning. This is despite the fact that James Comey himself was a registered Republican and arguably did more than anyone to help Trump during the election by announcing a reopening of the Clinton email investigation days before the election, while not informing the public that Trump’s campaign was also under FBI investigation.

Even before his inauguration as the 45th president of the United States, he denounced the agencies, comparing their practices to those of Nazi Germany

While the attempt to undermine the investigation has precedent – the Clinton team for example repeatedly discredited special counsel Kenneth Starr during the Monica Lewinsky scandal – this time Trump has the full weight of a powerful right-wing media behind him.

Fox News, the TV channel of choice for the president and the most-watched cable news channel in the US, has been trumpeting the president’s cause, relentlessly arguing the case that the US intelligence community is biased against Republicans. “Our ruling class is completely out of control,” pronounced popular prime-time presenter Tucker Carlson this week, as he denounced the “deep and terrifying corruption in Washington”, dismissed New York Times and Washington Post journalists as “idiot reporters” and called former CIA director John Brennan “a hack and a liar”.

Worryingly for Democrats, this message may be resonating. A Monmouth University poll this month showed that the number of Americans who believe the Mueller investigation should continue is shrinking – it is now 54 per cent, down from 60 per cent in March and 62 per cent last July. Similarly, a Quinnipiac survey found that 54 per cent of voters believe Mueller is conducting a fair investigation – down four points since March.

Rather than shy away from the investigation, Trump’s strategy is to highlight it. Trump and his supporters appear to be ramping up attacks on the Mueller investigation ahead of the mid-term elections in November in a bid to motivate Republican supporters to vote. Many believe that talk of a deep-state conspiracy fires up Trump’s base, feeding into the “us-versus-them” narrative of the election campaign, and evoking the idea of a Washington elite set on undermining the president and what he stands for. Several candidates in Republican primary elections in recent weeks have picked up on the theme, citing the Mueller investigation during debates. Senator Ted Cruz kicked off his re-election campaign in Texas last month with a video warning that Democrats would move to impeach Trump if they win control of Congress in the mid-term elections.

The relentless tweeting and outraged assault on US intelligence agencies by Trump-friendly media may have an impact on Republican voters. But its impact on the investigation itself will be negligible, even in spite of Rosenstein’s decision this week to probe FBI contacts with the Trump campaign. Amid the noise of Trump’s Twitter tirades, the Special Counsel investigation is continuing. Nineteen people have been charged, and five have pleaded guilty. With Guiliani predicting that the Special Counsel may conclude its obstruction of justice investigation by September 1st, the Republicans’ best hope might be to try and keep control of Congress. The prospect of a Democratic victory in November is likely to bring the US one step closer to impeaching the president.