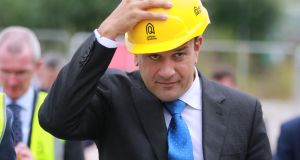 Taoiseach Leo Varadkar at the launch on Thursday of the redevelopment of the former Smithwick’s brewery site in Kilkenny. Photograph: Nick Bradshaw

There is little that Leo Varadkar can do about Boris Johnson’s jaunty charge towards a no-deal Brexit but there is a lot that he and his Ministers need to do, and do quickly, to prepare the people of this country for the consequences.

For a start, they have to be straight about the need for some kind of border on the island of Ireland to protect this State’s membership of the European Union single market. The mantra that we don’t want to see a hard border will become redundant the moment the UK crashes out and the people of this country need to be clear about that.

The EU, which has shown such solidarity with Ireland during the entire Brexit process, will also need to be reassured that we will do everything necessary to protect the single market. Our future prosperity depends on it. Disruption of trade with the UK will cause difficulties but it is overwhelmingly in our interests to protect our EU membership and our trade with the other member states.

Given that the budget will be announced in early October, the Minister has no choice but to prepare for the worst

The Tory tactic will be to blame the EU for whatever checks on trade are required to protect the single market so Irish people need to be told clearly why they are being imposed and how they are going to work in practice. The time for pretending that they won’t ever happen is past.

The other thing the Taoiseach needs to do is stop musing in public about the prospect of a united Ireland. This serves only to inflame the DUP while encouraging Sinn Féin in its reckless pursuit of an early border poll. Dealing with the challenge of a no-deal Brexit will pose enough difficulties for stability in Northern Ireland without throwing the prospect of a united Ireland into the mix.

Another challenge facing the Government will be the need for the budget in October to be predicated on a no-deal Brexit. Minister for Finance Paschal Donohoe has already announced that he is drawing up budget plans for that scenario. Given that the budget will be announced in early October and we probably won’t know for certain what the UK is going to do until the end of the month the Minister has no choice but to prepare for the worst. That will mean no tax cuts, tighter departmental budgets, with all the cutbacks in services that implies, and special provision for sectors worst affected by Brexit.

Johnson’s soptimism has been lapped up by his supporters. It is impossible to know whether this is a tactic designed to confuse EU leaders or whether it is a refusal to face reality

It could well be a political challenge for the Government to get the measure through the Dáil. The fragile minority Government has survived longer than most people thought possible in 2016 because the economic recovery has generated the revenue for increased social spending. How it will cope with spending cuts is another matter.

While the Government has to prepare for the impact of a no-deal Brexit on all fronts that doesn’t mean that it is inevitable. It is still impossible to know what Johnson will ultimately do when the EU calls his bluff. There is also the question of whether the British parliament will let him go over the cliff edge. A general election seems the only way out of the quandary.

At present the new prime minister is being lauded by the Tory press for standing up to the EU on the basis that EU solidarity will crack, the backstop will be binned and Johnson will get the kind of trade deal that the UK needs.

Going on the events of the past three years all of that is fanciful but it doesn’t stop wishful thinking in London. In particular the view that German goodwill to the UK, which undoubtedly exists, will lead to a crack in the EU position has re-emerged as part of the narrative in the British press.

Johnson’s sunny “have our cake and eat it” optimism has been lapped up by his supporters and much of the British media. It is impossible to know whether this is a tactic designed to confuse EU leaders and his political opponents at home or whether it is based on a Bertie Woosterish refusal to face the reality of what is going on around him.

James Graham, the playwright who wrote a brilliant television drama about the Brexit referendum campaign, has speculated that Johnson’s tactics, beginning with his cabinet reshuffle, may be designed to disorientate commentators and opponents based on the military strategy known as the OODA loop.

The basis of this strategy is to keep changing direction to confuse opponents while pursuing a clear goal. It is unclear whether Johnson’s goal is actually a crash-out Brexit or a deal with a chastened EU. It doesn’t really matter because it is based on the notion that the EU is as desperate to avoid a no deal as the UK and that is simply not the case.

The hollowness of military tactics and game theory when it comes to serious EU negotiations was exposed by the pathetic failure of Greek finance minister Yanis Varoufakis in his jousts with fellow finance ministers over the Greek bailout. The rules-based EU is not that susceptible to political game-playing, particularly in the case of a member state which has chosen to leave. What will happen when the penny finally drops in London is anybody’s guess.