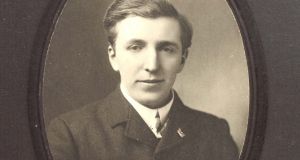 Bulmer Hobson: became deeply involved in advanced Irish nationalism in the first part of the 20th century. Photograph: Courtesy of the National Library of Ireland

Bulmer Hobson, who died 50 years ago on August 8th, was one of those rare birds – from a northern Protestant background, he became deeply involved in advanced Irish nationalism in the first part of the 20th century.

But perhaps his sympathy for nationalism is not so surprising when we learn that his father had been a Gladstonian Home Ruler.

As his biographer Marnie Hay pointed out, Hobson became one of the leading propagandists and organisers within the advanced-nationalist movement.

However, these activities came to an abrupt end at the time of the Easter Rising.

From a Belfast Quaker background, he was an early convert to the non-sectarian, republican philosophy of Wolfe Tone and, while working in the printing business in Belfast, he joined the Gaelic League and the GAA. He also joined Cumann na nGaedheal, the first association founded by Arthur Griffith. He co-founded the Ulster Literary Theatre in 1902 and it put on his poetic drama, Brian of Banba, in late 1904.

That same year, fellow Belfast man Denis McCullough swore him into the IRB and the following year they set up the Dungannon Clubs, for which Hobson wrote To the Whole People of Ireland: The Manifesto of the Dungannon Clubs. It was an open front for the IRB, which they, along with Seán MacDiarmada, set about revitalising.

In late 1906, Hobson founded and edited a weekly paper, The Republic; it lasted six months when, due to financial pressure, it merged with WP Ryan’s The Peasant in Dublin.

Moving to Dublin in 1907, he was instrumental in arranging the amalgamation of Cumann na nGaedheal, the Dungannon Clubs and the National Council to form Sinn Féin, of which he was vice-president for some years. With Countess Markievicz, he founded Fianna Éireann in 1909, a nationalist boy-scout movement that was intended to train the boys in military methods. He left Sinn Féin because of policy differences with Griffith and in 1911 became editor of a new IRB paper, Irish Freedom, shortly afterwards becoming a member of the IRB Supreme Council.

When John Redmond, leader of the Irish Parliamentary Party, demanded the right to nominate half the members of the Provisional Committee of the Volunteers, Hobson reluctantly agreed in order to prevent splitting the movement. This estranged him from IRB leaders such as MacDiarmada and Tom Clarke who were deeply opposed to Redmond.

His open opposition to a rising that had no hope of military success caused IRB comrades to kidnap him on Good Friday and keep him prisoner until fighting was well under way. He evaded arrest after the Rising and took no further involvement in nationalist politics.

He married Claire Gregan in June 1916 and they had two children, Declan and Camilla. Having worked in publishing for some years, he got a secure job in 1924 when he was appointed Deputy Director of Stamping in the Office of the Revenue Commissioners of the new Free State.

As a civil servant, he switched his interest from politics to economics, believing that if the Free State could develop a strong economy, it would eventually lead to reunification. He edited A Book of Dublin (1929), commissioned by Dublin Corporation, which presented the city’s history and culture and portrayed it as economically thriving. He also edited the Saorstát Éireann Official Handbook (1932), giving an account of the achievements of the first decade of independence.

His A National Forestry Policy (1931) was a privately published pamphlet urging reforestation as a means of economically regenerating rural Ireland and especially the Gaeltacht. His National Economic Recovery: An Outline Plan (1934), published privately and anonymously, set out his ideas on how to end poverty, unemployment and emigration.

He supported and wrote for the League against Poverty and the League for Social Justice, as it became. Some of his public pronouncements caused him to fall foul of the minister for finance of the time, Seán MacEntee.

His ideas were ahead of his time in some ways and failed to find favour with the authorities of the day. Fading eyesight caused him to write less. He retired in 1948 and moved to Roundstone in Galway. His Ireland Yesterday and Tomorrow, published the year before his death, makes for interesting reading.

His activism and writing were motivated by “an intense love of Ireland and a life-long commitment to improving his country culturally and economically,” Marnie Hay believes.