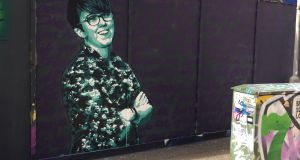 Mural of Lyra McKee in Belfast city centre: One way to honour her memory would be for a real university to promote study of her brave work. Photograph: David Young/PA

Sinead O’Shea’s documentary, A Mother Brings Her Son to Be Shot, released in cinemas last September, provides a harrowing vision of Creggan, a working-class area in Derry city. Filmed over the course of five years, the documentary is a longitudinal observation of a family, the O’Donnells, who live in an area that is alarmingly disaffected by the post-Troubles political reality in Northern Ireland.

The story of Majella O’Donnell and Philip O’Donnell, mother and son, and the trauma they undergo when Majella accepts the demand of paramilitaries in Derry to bring her son to be shot as a “punishment” for his involvement with drugs, provides the context of the film. Yet it is Philip’s younger brother, Kevin Barry, who becomes the irresistible focus of the film. This is attributable to the profound self-assurance that the boy has on screen, his striking worldliness for one so young as well as the near certainty, apparent in the opening shot of the film, that he will become embroiled in the violence that many prefer to think of as confined to the past.

Thus, the film charts Kevin Barry’s descent into the same quagmire as his brother. Hugh Brady, a republican who has been expelled from the movement and who now acts as a community leader, says about Kevin Barry mid-way through the film: “If it takes a fright . . . to make him see that what he is doing is wrong, I would be quite happy. As long as it’s only a fright.” Three men subsequently set upon Kevin Barry and beat him up badly.

O’Shea says to Kevin Barry in interview: “Somebody said to me that you were in trouble . . . they said maybe it wouldn’t be the worst thing if you got a fright.” To which Kevin Barry replies: “A fright? Are you having a laugh? F**k sake, my whole life has been a fright. Men at my door with AK47s and machine guns when I was only about nine.”

Something still more galling is to come when O’Shea asks Kevin Barry if he would prefer to have the Troubles back. He replies: ‘F**kin’ right. I am fed up, bored, there is nothing around this place . . . Everyone would . . . All people my age.”

Many of the angry and grief-stricken responses to the murder of the young journalist and author Lyra McKee in Derry on April 18th expressed hope that her killing would spark an urgent rethink in Northern Irish politics lest there be a recrudescence of violence. However, the root of the hope for a return to the Troubles, harboured by such people as Kevin Barry, as pathetic and tragic as it is, needs to be understood.

Kevin Barry’s perspective that “there is nothing around this place” for young people forms as eloquent an argument as any for concentrating as much governmental effort and public finance as possible on educational opportunities.

It would appear to be falling on deaf ears at the University of Ulster, which has systematically disinvested its campus in Derry and does not appreciate the importance of the role that a university can play in Derry.

Instead, it has overseen an evisceration of its Derry campus faculties and course offerings – including Irish history, restorative justice, sociology, psychology, modern languages, international politics and youth work – despite Derry’s rich cultural and historical heritage.

Successive senior administrators in UU have adopted identical tactics: promise something substantial to the Derry campus in five years or so, fail to deliver and resign to enable the cycle to repeat itself. In response to this contempt, a “Derry University Group” formed more than two years ago, but so far it has not succeeded in its aims, nor is there evidence that politicians feel pressured by it.

It is possible that some senior figures in UU realise what is at stake in destroying the integrity of its Derry campus. Such disregard of Derry’s need for a university recalls UU’s pernicious politics at its origin in the 1960s when the parliament of Northern Ireland’s Lockwood Report (published in 1965, three years before the Troubles began in Derry) provided for the second university in Northern Ireland to be established in the market town of Coleraine rather than in Derry city. Other senior administrators may not fully understand what is at stake, in which case they are undeserving of their leadership positions. Either way, Derry’s dire socio-economic situation, which feeds the paramilitaries, is related to the way in which UU has downgraded its Derry campus.

The most recent instance of threatened cuts to UU’s Derry campus is to Conflict Archive on the Internet (Cain), an invaluable archival resource that has been curated there since 1997. If the cuts proceed, radical action to rebuff the university’s philistinism (or worse) is necessary. An alternative site to sustain the Cain archive is justified, and that move just might form the initiatory momentum required towards establishing an independent university in Derry, separate from UU.

One way to honour the memory of Lyra McKee would be for a real university to promote the study of the brave and important work that she did. Such a bold step would not only honour McKee, it would also steer some young people away from the nihilism espoused by the dissidents through offering them broader third-level educational opportunities. Why leave it until it is too late?