Una Mullally: Government must not shaft students yet again

‘Free’ fees already cost €3,247, yet there are plans to burden young people further 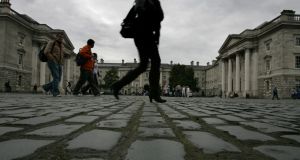 We’ve been told that student fees might be on the way back. But they already exist.

Although the popular narrative is that students are faffing around colleges for free, the reality is that going to university is a massive financial burden for many.

The mangling of language that surrounds college tuition in Ireland is ridiculous.

On UCD’s website, it says: “The student contribution for undergraduate students who qualify for ‘free fees’ is €3,000”.

Free fees costs three grand. But there are no fees, you see.

The “student contribution” equals fees, it’s just a silly label invented to convince others to say anything but the word “fees”.

The kite flown involves a student loan scheme, whereby students would be saddled with a debt after college, which they would pay back over 15 years, perhaps at €25 a week.

Fine Gael has spent much of its time in government desperate to shed any social responsibility, and dreaming up ways to privatise, sell off and levy whatever comes into its line of sight.

Labour, meanwhile, doesn’t have a leg to stand on when it comes to students, with Ruairí Quinn and Eamon Gilmore having spectacularly reneged on their public pledges to oppose and campaign against fee increases.

Charging students large amounts for university education is an ideological drive to erase even the concept of free education, and it should not be tolerated.

The more third-level education costs, the less equal our society is.

When fees exist, university education reverts to being elitist and exclusionary.

Why are universities struggling to make ends meet?

Many of them put on the béal bocht pretty effectively, especially those with large property portfolios.

But there are genuine and urgent funding issues across the sector.

Perhaps that has something to do with State grants to universities falling 38 per cent in seven years. It rather suits Government to find a way to make up for this shortfall.

It also has to do with a lack of funding from private sources, both philanthropic and commercial.

When it comes to industry, isn’t it curious that the Government is willing to allow multibillion dollar companies to set up here and pay eye-poppingly low tax rates, yet there is no onus on them to contribute to the sectors of our society from which they draw their personnel?

Why not charge tech companies a levy – even a fraction of a percentage – in tax to contribute to funding third-level education?

Young people made the difference. Now, the thousands of newly politicised students will hopefully be aware of how they might be screwed over – and prepare to fight back.

There are real, astute leaders throughout the movement.

Students should prepare to fight fees in all their forms. In the past in this country, third-level education was seen as a privilege, and indeed it was for the privileged. But education is a right.

Is it not enough that young people can’t find secure employment here, and have to leave the country where their family and friends live?

Is it not enough that the lack of student accommodation leaves many homeless when term time comes around; that students are being driven out of places they want to live because of the lack of a fair and affordable rental sector?

Is it not enough that many cannot conceive of being able to own a home of their own?

Is it not enough that so many young people can’t afford childcare; that the solution for unemployment is the obnoxious JobBridge scheme, which demands that people work for free and suggests they should be grateful for even that?

Is it not enough that the options and aspirations for young people in Ireland have been so curtailed thanks to the mistakes their parents made?

Clearly not. An attempt to penalise young people further through a new era of student fees is on the horizon.

It should be fought every step of the way. Students – and prospective students – would do well to ask politicians what their position is on the doorsteps, not to mention thinking about it when the ballot boxes are before us all next year.

1 Irish tourists excluded from visiting Greece as country begins its tourism season
2 We need to pay very close attention to what is happening in Britain now
3 Patience wearing thin as three parties crawl towards a government
4 Coronavirus: Nine more deaths reported in the Republic
5 Connell losing touch with the club championship is the real tragedy of Normal People
Real news has value SUBSCRIBE