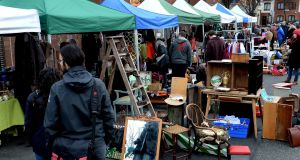 Dublin Flea Market at Newmarket Square back in 2015. It was an exercise in community, creativity, entrepreneurship, friendship and fun. Photograph: Cyril Byrne

A “street art hotel” opened in Smithfield recently, around the corner from a mural Dublin City Council once demanded be removed.

Before you could even make a joke about it, the building the mural was on was demolished. That’s how rapid the pace of change in Dublin is right now – even the ironic gags can’t keep up.

Many Dubliners, and indeed traders around the country, were devastated with last week’s news that the Dublin Flea Christmas Market was cancelled. This market was not a ramshackle affair. Seventy-three thousand people attended last year, spending €3.5 million on dozens of independent Irish businesses, artists, crafters and more.

It filled the void that is the Point Square, the largely vacant shopping centre at the edge of the Liffey, and created a brilliant buzz.

There are, remarkably, still people in this city who are trying to do good things, things rooted in community and fun and in gathering

It was an exercise in community, creativity, entrepreneurship, friendship and fun. Many traders relied on it for a large part of their annual income. Like so many things that were willed into being during the recession, it has fallen victim to Dublin’s doomed trajectory. If a successful market cannot function, never mind flourish in this city, then this city is not fit for purpose.

Sharon Greene, who runs the market, spent six months trying to figure out its future. The more regular Dublin flea market had already been moved from Newmarket Square due to development in the area. Point Square would not take their booking for December 2019, and finding a viable alternative became impossible.

“Sadly we have come to the heavy realisation that there is insufficient infrastructure and support for an event of this type and scale in Dublin,” Greene wrote announcing the closure.

She continued: “We worry that Dublin is steadily becoming more and more a commercial, corporate and tourist city with no space for grassroot culture or creativity.

“We have said it before and we say it again; the lack of event spaces, creative hubs, artist studios, design workshops, late-night venues, clubs and affordable independent retail spaces means there is little space left for experimentation, innovation and creative expression. These types of unstructured gathering spaces are where the seeds of contemporary culture are sown.

“They are vital if we want Dublin to have a unique cultural identity that will set it apart as a great city to visit, live and do business in. Without them we are on a slippery slope to becoming a homogenous and bland capital city.”

It can be easy to catastrophise when things like this happen, or bundle them into all the other closures, incidents, conversations and feelings that are colouring the experience of Dublin right now, and package them into a narrative that is doom-laden and helpless.

Dublin is at a critical point right now, perhaps a point of no return

But Dublin is slipping away, trying on someone else’s ill-fitting clothes, looking ridiculous, gravitating towards nonsense, and embarking upon an era of profound regret. And no one seems to be able to get the city to cop on. Why would those in power try to pull it back? Plenty of people are making a lot of money from the blandification of the capital.

But it’s about more than that. There are, remarkably, still people in this city who are trying to do good things, things rooted in community and fun and in gathering, things that support independent businesses and are open to ideas and collaboration, things that are rooted in the collective, things that are about atmosphere and where the payoff is a feeling that something decent is happening, things that are accessible to a large number of people and not rooted in exclusivity. That tapestry of talent and gumption is becoming a threadbare fabric.

Dublin City Council has paid lip service to markets over the years. There’s the Draft Markets Framework Plan (2002), the Markets Area Draft Framework Plan (2006), and the presentation on the proposed retail market for Dublin (2014), which pitched September 2015 as the completion date for a retail market at Chancery Street and Mary’s Lane. That’s the talk.

But what has been the action? In 1997, Dublin City Council gave Martin Keane a 500-year lease on the Iveagh Markets in Dublin’s Liberties.

An Taisce named it one of the top 10 at-risk buildings in Ireland, saying: “This building urgently requires new uses to be identified to prevent further deterioration of its character.”

Dublin City Council has been making moves to try and repossess it, but the tale of this once beautiful building says it all. A prime site that could be utilised for the good of the city languishes.

People who actually wanted to create something for their fellow city folk are ground down by a city where anything goes for those with deep pockets and big backers, and everyone else is tossed aside.