We need to put misogyny on trial. We need men to step up and challenge their own behaviour and the behaviour of their peers 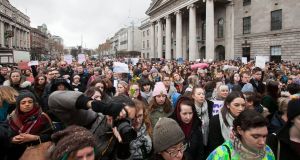 Marchers express support for the complainant in the Belfast rape trial outside the GPO in Dublin this week. Photograph: Gareth Chaney/Collins

I’m not going to write about the verdict of the Belfast rape trial. That technical legal argument has been decided, and the law has emerged in favour of four men. But as we all know, much more was revealed throughout this trial - which has had an emotional impact on most people I know - than the verdict.

There were days when I couldn’t read the reports. There were days when I did read them, and thought, “I’m just going to park that.” We compartmentalise to contain our emotions, to keep going, to stem the burgeoning overflow that can leave us in states of rage and despair. In many ways, everything is always about something else, and this trial represented so much about how women are treated.

Stuart Olding’s counsel, Frank O’Donoghue QC, used the types of arguments and language that left me exasperated and sad. He asked the court if Olding was the type of guy who would commit rape, “Seriously? A man who has no history of violence on or off the field?” O’Donoghue asked the young woman why she didn’t say “help me, I’m being raped and I’m going to be raped again.”

That’s not how it works, of course, but that doesn’t matter when you’re constructing an argument in court. He called the disgusting messages the men had sent to each other “a titillating sideshow”. Let’s look at those messages, and see how they reveal what these men of “good character” think about women. “We are all top shaggers,” Olding messaged. “There was a lot of spit roast last night,” Jackson messaged. “A merry-go-round at the carnival,” Olding said. McIlroy captioned a photograph, “Love Belfast Sluts.” He also messaged a friend saying, “Pumped a bird with Jacko on Monday. Roasted her.” Those are the facts.

If any man I know spoke about a woman like that, I would find it hard to believe he respected women, that he understood women to be full and whole human beings. I would wonder about him, to be honest. I would wonder what his behaviour was like in a nightclub in the early hours after a skinful of pints. Wouldn’t you? When people tell you who they are, listen to them. When people show you who they are, believe them. “Any sluts get fucked?” one of the “lads” asked, “precious secrets,” Olding replied. Those messages tell us what those men are like. It’s right there. Some men might call that “banter”.

The young woman sent messages too. “I am not going to the police, Going up against the Ulster rugby. Yea because that’ll work,” she texted, shortly after the incident. Another text to a friend read, “Thing is I would report it if I knew they would get done. But they won’t. And that’s just unnecessary stress for me. It will be a case of my word against theirs.” She seemed to know in the back of her mind how it would pan out.

It is time now to lobby effectively for reform in trials of sexual assault. Why does it feel that in rape cases it is the alleged victim who is on trial?

Decent men are despondent. The men I know are livid. They’re disgusted by those WhatsApp messages, and feel sorry for what the young woman was put through during the trial.

For women, our reaction vibrates so much deeper. We carry the residue of every unwanted grope, every assault, every sexual encounter that we re-evaluate in the context of contemporary conversations about consent. Educating ourselves is a positive thing, but it also brings pain and shame to the surface. There are things we want to forget, brush off, disregard, but they’re there, niggling away at us, the hollow feeling of compartmentalising, the echo of every sleazy remark and catcall.

It is time now to lobby effectively for reform in trials of sexual assault. Why does it feel that in rape cases it is the alleged victim who is on trial? In a much broader context, we need to put misogyny on trial. We need men to step up and challenge their own behaviour and the behaviour of their peers. We need to talk about consent and stop humouring the petulant arguments against consent classes in schools and colleges.