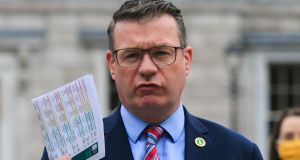 In normal times the news cycle would allow for some breathing space to discuss how dramatically the party-political landscape has shifted in Ireland. But given how the pandemic has monopolised discourse and news coverage, there’s little scope to step back and survey how different everything looks in the Dáil compared with earlier this year.

One of the lesser observed aspects of this Dáil, is the rebirth of Labour Party leader Alan Kelly. In the past, Kelly was seen as an antagonistic presence, a politician constantly primed for detonation, earning him the nickname AK-47. During the Labour Party leadership contest this year, it was Kelly versus Aodhán Ó Ríordáin. Should the Labour Party respond to millennial angst with Ó Ríordáin or take a punt on the guy who once gave an interview declaring that power was a drug that suited him? In the end Kelly won, which was seen in some quarters as a rather disastrous move;that Kelly’s temperament and lack of connection to the zeitgeist would plunge Labour further into irrelevance, if that were even possible. It’s worth remembering how catastrophic the 2016 election was for Labour, when they lost 30 TDs and held on to only seven seats. This year, nothing could be as bad as that – but they still lost a seat.

Yet on the Kelly front, it’s beginning to seem like the detractors were wrong. In media and for the most part in the chamber, Kelly’s gasket-blowing is often reduced to a simmer. Remarkably, here is a politician who has mellowed with responsibility. The perception is that he is maturing into the role of leader. We won’t know (for now) what an Ó Riordáin-led Labour would have looked like, but Kelly-era Labour is shaping up to be a little more intriguing than predicted. So can Labour, with its smattering of all-male TDs, progress?

The left-wing and centre-left voters who abandoned the Labour Party still present the party with a basic communications difficulty, as any policy announcements or attempt to promote themselves are instinctively knocked back with the residual rage that still colours the legacy – and lived reality – of Labour’s collaboration with the horrific austerity policies of 2011-2016.

But while Labour feels oh-so-small now, could the party potentially “do a Green Party” on it and simply wait out the passage of time before capturing a new tranche of voters who may be less inclined to gravitate towards Sinn Féin or other left-wing parties, and who recall less of the party’s disastrous five-year austerity stint? And what would make those voters gravitate towards Labour and not the increasingly natural home for many that is the Social Democrats? While a merger between Labour and the Soc Dems would make ideological sense, the Labour “brand” and legacy is held far too dearly (and rightly so) to dilute it for the sake of opportunistic short-term electoral success.

Attention to issues is what engages voters now more than anything else. An overlooked aspect of the 2020 general election was that, for the most part, Irish people voted on national issues rather than local interests. As this Government progresses beyond its chaotic beginnings, the dominant issues of the day – the pandemic, housing, the health service, cost of living – will persist, and be joined by other issues: Brexit, large-scale youth unemployment, a collapsing economy, the decimation of small businesses and a chasm between those whose livelihoods were dramatically impacted by the pandemic and those who got away with it, and in fact have clocked up savings. This will reorient Irish party politics towards young and working-class voters, and the young working class and the new working class.

When Sinn Féin is in government, expectations will be so high among their voters that any failures will be pinned on them

The Greens have wilted in government, which is what you get when you hang out with Fine Gael and Fianna Fáil. In the recent election, the Greens benefited from the support of a new generation of voters who didn’t viscerally remember the party in coalition with Fianna Fáil, yet are now realising that when a party repeats history, it also repeating an outcome, which is: voters hold you to higher standards than the people you’re in cahoots with, and punish you. In Labour’s case, the anger towards them was so pronounced, they never got to own the social change they helped instigate.

Kelly is looking to hitch the Labour wagon to Sinn Féin. Both parties are frequently espousing the same opinions, backing each other up in media interviews, voting along the same lines and creating a cohesive Opposition alongside the Soc Dems and People before Profit. Would Labour not be decimated again as a small party going in with a bigger party should a left-wing coalition government coalesce? Not necessarily. When Sinn Féin is in government, expectations will be so high among their voters that any failures will be pinned on them, and their coalition partners will be shielded from the most severe criticism. That’s why, ultimately, for smaller parties allying with Sinn Féin is becoming the only game in town. Kelly knows it, and it’s perhaps that added pragmatism that marks him out as a leader more drawn to realism than rhetoric. As ludicrous as it may look on paper to talk about a Labour resurgence, the only way is up.

1 Son putting elderly dad under pressure to sign over land
2 Covid-19: Museums, cinemas set to reopen next week as Varadkar warns of New Year restrictions
3 Stir-crazy Dutch holidaymakers set to descend on Caribbean island
4 Alison Curtis: My guilt at not going for a second pregnancy
5 Bloomberg ranks New Zealand top in fight against Covid-19 - but how did Ireland fare?
Real news has value SUBSCRIBE