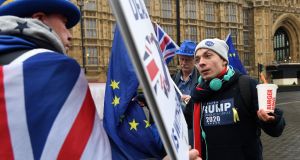 A pro-Remain campaigner (left) and pro-Leave activist remonstrate with each other outside parliament in London last week. Parliamentarians are to vote on British prime minister Theresa May’s Plan B Brexit deal on Wednesday, January 29th. Photograph: Andy Rain/EPA

Why did the UK vote to leave the European Union? The most commonly held view is that it was a populist revolt of the kind that has upended European and American politics in recent years, driven by disaffected voters “left behind” by globalisation. But while that is certainly part of the story, it is by no means all of it.

To make sense of the UK’s vote to leave the EU, we need to unpack both the moment in history in which it occurred, as well as the coalitions who supported it. The timing of the vote was inauspicious from a Remain perspective. It took place amid the worst decade of pay growth since the Napoleonic wars, the deepest austerity in modern times and in the shadow of the eurozone crisis. It also occurred when broadly Eurosceptic baby boomers were at their electoral peak, while the more pro-European “silent generation” of the war years was in steady decline, and their younger more Remain-minded cohorts were yet to reach their full electoral potency. Economically, as well as electorally, it represented a truly reckless moment for a Remain-supporting prime minister to seek to settle the European question. But whatever the timing, the referendum fundamentally pivoted around the creation of an alliance of older, conservative middle-class voters and the semi-skilled and unskilled working class – a combination of what has been called “the insulated and the excluded”.

Political discourse about the referendum has been dominated by the plight of “left behind” voters in Britain’s former industrial towns and coastal fishing ports. Yet in reality, older, relatively prosperous voters were just as significant, reflecting the UK’s marked inequalities in voter turnout by age. The referendum result, therefore, represented a reckoning with places that have never recovered from the shock of de-industrialisation and Thatcherism, as well as groups who have not been reconciled to the ascendance of ever-greater social liberalism and the cosmopolitan remaking of Britain, or the European remaking of the British state.

For those reasons, the outcome of the vote is difficult to explain in terms of the dominant interests in the productive economy. The City of London, the major business organisations and the trade unions all supported Remain, as did the main political parties.

The Leave vote disproportionately came from interests outside the labour market – older voters with a foundation of housing and pension wealth, or the state pension and pensioner benefits – and those struggling precariously within it, like the low-skilled and self-employed. Its campaign was led by a political and economic elite – even if it was an unconventional one, drawn from beyond the organised pillars of the economy – but it successfully channelled an eruption of politics against the established political economy. It shook to its core the world view that the big contours of the UK’s economic policy were firmly set and resided outside the reach of democratic contest. And it forced attention – if not public policy – upon an economic trajectory that had so unevenly distributed the gains of growth over the last four decades.

Other drivers of the referendum vote are perhaps easier to grasp. The young and middle-aged, and the better-educated, were far more inclined to vote Remain. These are the social groups most comfortable with immigration and the diversity of modern Britain. The geography of the referendum reflected this, pitting most of the major urban centres and university cities against the towns, countryside and coastlines. Majorities in Scotland and Northern Ireland voted Remain, while most of England and Wales opted to Leave. This political geography is new: in 1975, none of the UK’s constituent nations voted No to EEC membership, and England and Wales recorded the largest supporting majorities.

While these headline territorial patterns are striking, consideration needs to be given to differences within regions and how they interact with the effects of age. Look, for instance, at retired voters in a strongly Remain region like London and we see they backed Leave in similar proportions to the retired of Yorkshire, the northwest or Wales. Equally, if we just consider those in work, we see Remain won in more nations and regions of the UK than Leave. Brexit has certainly fractured the electorate in important ways. But it is a far more complicated picture than London, Scotland and Northern Ireland versus the rest of England and Wales.

The Brexit juncture comes in a new era of UK politics. It marks the first real crisis of politics in the post-devolution era in which the UK has become formed as a multinational state, not just in terms of its governance, but in its identity too. Formal decisions concerning Brexit reside with the Westminster parliament, but the consequences ripple across the UK’s nations and their assemblies, parliaments and civil societies – not least in Northern Ireland. The European question has layered another deep cleavage on to the already fractious union territorial politics.

The challenge for any UK future government is not just the technical task of successfully negotiating the economic risks of Brexit but also the political one of crafting an electoral coalition that spans these new divides. This would require Herculean leadership by the standards of any age, let alone one in which the main parties are so visibly struggling to rise to the level of events.

Gavin Kelly is chief executive of the Resolution Trust; Nick Pearce is professor of public policy at the University of Bath. This is an extract from the introduction to Britain Beyond Brexit (Political Quarterly, forthcoming)

1 Donald Trump is in trouble, and that could spell very bad news
2 Varadkar says Government pushing for quicker easing of lockdown
3 Taoiseach says €350 pandemic payment to be cut for some part-time workers
4 O’Doherty and Waters ordered to pay legal costs of case against State over Covid-19 laws
5 Villa oasis by the Forty Foot in Sandycove for €1.95m
Real news has value SUBSCRIBE