Peter Boylan: New maternity hospital should not be given to Sisters of Charity

The religious order disagrees with modern maternity and gynaecological care 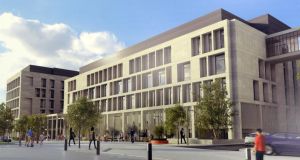 Plans for the new National Maternity Hospital in Dublin.

A new national maternity hospital is badly needed to serve the interests of the women and infants of Ireland. There is no argument about this.

Despite clinical outcomes that compare with the best in the world, there are obvious infrastructural deficiencies in the existing building, on Holles Street in Dublin.

The design of the hospital planned for the Elm Park campus, next to St Vincent’s University Hospital, is superb.

Huge credit is due to those who have invested so much time and effort in the project. It is to be hoped that planning permission will soon be granted.

The cost is expected to be at least €300 million, although inflation may cause that figure to rise.

Funding is to be provided by the State, together with the proceeds of the disposal of the Holles Street site.

Following a breakdown in negotiations between the National Maternity Hospital and St Vincent’s Healthcare Group last year, a mediation process directed by Kieran Mulvey was put in place by Minister for Health Simon Harris.

Last November agreement was reached between the Sisters of Charity, the sole shareholders of St Vincent’s Healthcare Group, and the board of the National Maternity Hospital.

The decision of the hospital board was not unanimous, but there was a significant majority.

I did not support the proposed arrangement – and, indeed, expressed my reservations to my fellow board members over an extended period of time.

The shareholders of the National Maternity Hospital are the 100 governors, who own the hospital in trust and who will need to agree the proposed arrangement. I am one of those governors. To date the agreement has not been put to us for decision.

Principal points of the agreement

The board will consist of four directors nominated by St Vincent’s Healthcare Group, four nominated by the National Maternity Hospital and one who is an obstetrician gynaecologist of international reputation.

It is suggested that clinical independence will be protected by “reserved powers”, and the Minister for Health will hold a “golden share” as further protection.

So let us be clear: the Sisters of Charity will be the sole owners of the new National Maternity Hospital.

Many at the hospital are satisfied that adequate protection is provided. I am not

Many at the hospital are satisfied that adequate protection is provided. I am not.

Are we seriously expected to believe that if the hospital goes ahead according to the proposed arrangement it will be the only maternity hospital in the world owned by the Catholic Church, and run by a company owned by the Catholic Church, that will allow these procedures? This stretches credibility to breaking point. Indeed it would seem to be naive.

The board of any hospital oversees, in a corporate sense, the clinical work of the hospital.

The proposed structure means that the four directors nominated by St Vincent’s Healthcare Group will have fundamental religious objections to a significant part of the clinical work of the hospital.

This structure will inevitably create conflict and is not a recipe for a harmonious working relationship at board level.

In a power struggle who is more likely to win? Is it likely to be the owners of the hospital and the company tasked with running it?

In a power struggle who is more likely to win? Is it likely to be the owners of the hospital and the company tasked with running it? Who is the ninth member more likely to support?

The “golden share” held by the Minister for Health is supposed to be the ultimate protection. Ministers for health come and go and will inevitably hold differing views.

Indeed, if the safeguards for true clinical independence are as robust as is currently claimed, why is there any need for the Minister to hold a “golden share”?

Since the news broke this week of the plan to hand sole ownership of the taxpayer-funded new National Maternity Hospital to the Sisters of Charity there has been public outrage. This is understandable.

Public statements of reassurance about clinical independence have been undermined by the revealing interview with Sr Agnes Reynolds, a director of St Vincent’s Healthcare Group, quoted on the front page of this newspaper yesterday.

When given an opportunity to provide reassurance that the the religious beliefs of the Sisters of Charity will not influence medical care, Sr Agnes refused. What she said was: “I can’t make a judgment on that.”

Is there a solution to what has clearly become a cause of public outrage? I believe there is. The Minister for Health now needs to address two key issues: the ownership of the new hospital and the composition of its board.

I do not believe that ownership of the €300 million, state-of-the-art National Maternity Hospital should be gifted to the Sisters of Charity. A lot of other people appear to share my view.

Secondly, a properly independent board needs to oversee the running of the new hospital.

The Minister has the power to intervene to protect both the medical interests of women and their infants and the financial interests of the Irish taxpayer. He must now do so.

1 Kate Winslet: ‘I shouldn’t have worked with Woody. I’ll always grapple with that regret’