Turkey is now Erdogan’s to lose

Victory for opposition candidate in Istanbul a stunning setback for president 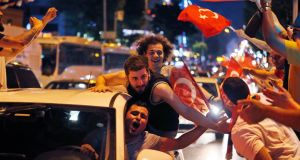 Supporters of the secular opposition Republican People’s Party candidate for mayor, Ekrem Imamoglu, celebrate in Istanbul. For all the understandable euphoria, it is too early yet to write off Turkish president Recep Tayyip Erdogan. Photograph: Lefteris Pitarakis/AP

Recep Tayyip Erdogan has gambled and lost – spectacularly. In an election for mayor of Istanbul at the weekend, Turkey’s all-powerful president suffered the most stunning setback of his 25-year political career, and he has only himself to blame. “Whoever wins Istanbul wins Turkey, ” he has said. Turkey is now Erdogan’s to lose.

The victory for opposition candidate Ekrem Imamoglu in the contest to govern one of the world’s great cities is a watershed for Turkey and its autocratic president.

It exposes Erdogan’s decision to challenge an earlier vote in March, which his conservative-nationalist man lost narrowly, as a mistake rooted in paranoia and hubris. And it could revitalise Turkey’s secular opposition, which for two decades has been divided and poorly led.

Turkey is a country of competing power centres, so being mayor of Istanbul matters

Imamoglu appealed to voters by being everything Erdogan is not – optimistic, young, even a touch naive. His delightful campaign slogan, “Everything will be fine,” was a rebuke to the president’s strident populism.

In a city of 15 million, teeming with Turkey’s talented and restless youth, Imamoglu looked the part more than the candidate of the cynical and exhausted president.

Turkey is a country of competing power centres, so being mayor of Istanbul matters. The city is Turkey’s commercial, social, media and cultural hub, and City Hall is a natural platform for a tilt at national politics. Erdogan was the mayor from 1994 to 1998, and it propelled him to power.

The question now is whether Imamoglu’s ascent will enable him to do something similar. He is Turkey’s man of the moment, yet we must wait to see whether his time has really come.

For all the understandable euphoria on the streets of Istanbul on Sunday, it is too early to write off Erdogan, one of the most remarkable political leaders of the 21st century. Since 2002, he and his conservative-nationalist Justice and Development party have won every electoral contest they contested -–local, general, presidential and referendum.

In his first decade in power, he transformed Turkey from a ramshackle semi-democracy subject to occasional military rule into a regional and sometimes global power, economically, politically and diplomatically. He positioned the country as the leading state actor in the Muslim world, flirted with joining the European Union, browbeat the military into retreating from politics, and liberated millions of Turks from exclusion and penury. A grateful majority voted for him in droves.

Yet that free and vibrant Turkey has almost vanished in the past five years. Without an effective opposition, and surrounded by a cadre of fawning advisers, Erdogan has turned his brand of leadership into one-man rule. He is intolerant of dissent, which he regards as tantamount to ingratitude for everything he believes he has achieved for the nation, and is increasingly prey to conspiracy theories and economic mumbo jumbo.

In 2013, he turned his wrath on youngsters in Istanbul who protested at the closure of one of the city’s few parks, which had been earmarked for a shopping mall. The unrest prompted by the affair left several people dead as the police, egged on by Erdogan, reacted brutally. The trial of 16 people for allegedly fomenting the unrest was due to begin in Istanbul yesterday – and it will be a running reminder to the president and the city of that fateful clash.

Erdogan has also made a series of miscalculations that have frayed ties with Turkey’s friends. His decision to buy military hardware from Russia has infuriated Nato, of which the country is a longstanding member.

He has goaded violent Kurdish separatism back to life by reneging on promises of integration and reform. He has also misread the civil war in neighbouring Syria – though Turkey is exceptionally hospitable to refugees from that terrible conflict.

Worst of all, Erdogan over-reacted to an attempted coup by rogue elements of the military three years ago. That event and its aftermath have left Turks bewildered and traumatised. Tens of thousands of people have lost their jobs or have been imprisoned without trial. He blames a cultish Muslim cleric, whom he once courted, for hatching the coup attempt, and has been in pursuit of vengeance ever since.

All of these developments have bent Turkey out of shape. It is no wonder, in the circumstances, that Istanbul’s residents opted for change. A generation of young Turks has known no other political leader. His demand for a re-run of the mayoral election showed he no longer trusts voters; its outcome suggests many of them are tired of him.

In a country with a history of upheaval, Sunday’s election outcome feels like a moment in history. Yet it is important not to jump to conclusions. Imamoglu is too inexperienced to be an immediate threat to Erdogan’s position – which is unassailable within his own party in any case.

Moreover, the upstart mayor’s own political base - the Republican People’s Party (CHP) – is hardly a bastion of new ideas and European-style social democracy.

Founded by Ataturk, the soldier-statesman who forged the republic from the ruins of the Ottoman Empire after the first world war, the CHP has long been reactionary, exclusionary and controlling – like Erdogan’s movement is today. Imamoglu’s elevation to Istanbul city hall is therefore not the end of something. Yet it is undoubtedly a beginning.