Climate action plan is nothing if it fails to address inequality

Carbon taxation measures must not hit society’s poorest the hardest 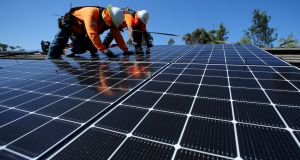 The 2019 climate action plan, taken at face value, aims to catapult Ireland from laggard to leader on climate action globally. Eye-catching proposals for renewable energy expansion, national carbon budgets and sectoral targets, retrofitting of homes and the ambitious proliferation of electric vehicles have won praise from a broad spectrum of observers.

On closer inspection, and comparison to the consensus report from the Oireachtas committee on climate action, a somewhat different picture emerges. Diminished ambition on legislation, the proposed rate of retrofitting of homes and the absence of a thrust towards energy democracy through community-owned co-operatives are all a cause for concern. As is the lack of a plan for the agricultural sector.

Significantly, however, the climate action plan proposes a governance structure which might just deliver on a transition to a low-carbon future. The transition we face is one of deep complexity and our current governance system has shown it is not fit for purpose in this regard. The challenge of robustly tackling climate breakdown requires unprecedented co-ordination across government ministries.

The collective challenge of climate action requires that either everyone is enabled to participate in the transition to a low-carbon future, or we fail

To this end, the plan to establish a Climate Action Delivery Board within the Department of An Taoiseach and an independent Climate Action Council offers hope of a governance structure more fit for purpose. The establishment of a just transition review group, within the National Economic and Social Council, is also positive.

The challenge now is implementation. It is disappointing to see reference to climate justice in the plan reserved for multilateral processes and international development assistance only. The tenets of climate justice are just as relevant to domestic action as international action. Climate justice has two distinct moral positions – namely to ensure that those most vulnerable to the impacts of climate change are protected by undertaking the necessary climate action while also ensuring that climate action itself doesn’t exacerbate existing inequalities and cause those living in precarious circumstances to suffer further.

The first step to ensuring a just transition is recognising that this climate action plan is to be implemented in a nation suffering significant and pervasive inequality. The collective challenge of climate action requires that either everyone is enabled to participate in the transition to a low-carbon future, or we fail. Ongoing research by Dr Amie Lajoie at Tasc into household debt in Ireland indicates that 17 per cent of all households went into arrears for basic utilities over the 12 months studied and that 71 per cent of low-income households cannot save on a regular basis. Existing inequality brings into focus the justice dimension of the transition.

Concerns will continue about the promise of a fair carbon-taxation system until meaningful, evidence-backed proposals are on the table to prevent hitting the poorest the hardest

Upfront costs for the retrofitting of homes, electric vehicles or access to renewable microgeneration make these services inaccessible to poorer households. Existing grants still require significant upfront payments and anticipating that households should be willing or able to take on debt to cover the cost of access is a tenuous assumption. If unevenly implemented, those who can afford microgeneration and retrofits will benefit from associated savings and feed-in tariffs, while those who can’t, won’t.

Serious planning is required if solutions driven by the climate action plan are to be fair and just. Basing proposals on untried policy assumptions or an overreliance on market-based approaches is just as dangerous to our shared future as putting faith in technological red herrings like carbon capture and storage.

For example, the climate action plan, when discussing the need to develop a new delivery structure for retrofitting, cites “Energiesprong”, a Dutch project which has seen significant success in addressing both inequality and emissions. However, as with everything, context is important. The Netherlands is a significantly more equal society than Ireland and Energiesprong’s Ron van Erck said in an interview earlier this year that the company’s model for retrofitting relies on cities having “an abundance of social housing stock”. Hardly an apt description of Ireland in 2019.

Similarly, concerns will continue to be raised about the promise of a fair carbon-taxation system until meaningful, evidence-backed proposals are on the table to prevent such measures hitting the poorest the hardest. The climate action plan cites findings from a recent Economic and Social Research Institute paper that a carbon-tax decreases emissions. However, it omits a second finding in that paper – a reiteration that carbon tax is regressive and that this impact is particularly evident on rural households. The researchers’ model does indicate that carbon taxation coupled with either flat or targeted recycling of revenue to households can address inequality but the practical operation of such a mechanism has yet to be robustly considered.

Should national plans not evolve to ensure that climate action builds community wealth, a significant opportunity will be missed

Climate action has the potential to revitalise economies still struggling to recover from deep recession experienced in 2007. This will not happen without intentionally providing more market space for innovative ownership structures focused on building community-based wealth and promoting meaningful employee participation.

So-called “green-collar” jobs have the potential to provide stable, quality employment opportunities for communities around Ireland. The plan speaks about “community participation” in renewable-energy generation but stops short of calling for community-owned renewable energy co-operatives as a priority.

Should national plans not evolve to ensure that climate action builds community wealth, a significant opportunity will be missed to advance climate justice, address inequality in Ireland and build social approval for urgent and ambitious climate action.

Seán McCabe is policy officer with Tasc, the Think Tank for Action on Social Change

1 Dublin farmer discovers overnight rave on his land
2 Coronavirus: 188 new cases and no further deaths amid concern over eight counties
3 Three Covid-19 mistakes Ireland urgently needs to learn from
4 Should I switch bank now with Ulster Bank at risk of closing?
5 Children removed from care of parents after claims they were ‘stripped and flogged’
Real news has value SUBSCRIBE