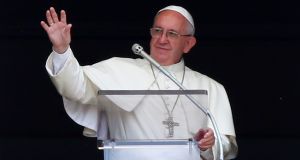 Pope Francis’s consistent call for open discussion and dialogue, and indeed for open doors, has created a climate where the whole issue of women’s place in the church is now centre stage. Photograph: Reuters/Tony Gentile

The efforts made by the Vatican to silence discussion on the ordination of women over the past 50 years have been both unsuccessful and unwise. In 1975, Pope Paul VI declared that the Catholic Church “does not consider herself authorised to admit women to ordination”.

This was followed a year later by a document from the Congregation for the Doctrine of the Faith (CDF), which stated that the priest is a sign, and for that sign to be perceptible, “a natural resemblance” to Christ is required.

In the Mass the priest acts in persona Christi, and since Christ was male, the priest too must be male. The document concludes with an assertion of its authority: “It is the church, through the magisterium [teaching authority of the church], that decides what can change and what must remain immutable”. In short, “because I say so”.

This did not end the discussion, which continued apace around the church. So in 1994 pope John Paul II attempted to impose a final papal clampdown with his letter Ordinatio Sacerdotalis: “I declare that the church has no authority whatsoever to confer priestly ordination on women and that this judgment is to be definitively held by all the church faithful”.

This document, and a follow-up by Pope Benedict, led to a major theological debate in the church as to what is an infallible statement, and what exactly is the status of a judgment that “must be definitely held”.

Because of this, a year later the CDF once again issued a statement. It judged it necessary, it stated, to dispel the doubts and reservations that have arisen by issuing a responsum ad dubium, approved by the pope.

It stated that the teaching on the ordination of women “requires definitive assent, since . . . it has been set forth infallibly by the ordinary and universal magisterium . . . and that it is to be held always, everywhere, and by all, as belonging to the deposit of faith”.

End of debate. Or is it? The doctrine of papal infallibility has caused a lot of soul-searching since it was first declared in 1870 at the first Vatican Council. The most generally accepted theological interpretation is that the pope speaks infallibly only when he is affirming something that is widely held by the Catholic faithful.

In order for that condition to be fulfilled there needs to be widespread discussion at all levels in the church. By laying down a diktat, as John Paul did, that there could be no discussion on this topic, it seems to me that he was attempting to prevent an essential prerequirement for any infallible statement.

And by thinking up this new category of something that must be “definitively held”, the Vatican is trying to give weight to something that has no theological, scriptural, or, indeed, good common sense arguments behind it.

So the debate continues, and grows more pronounced, as women increasingly find their voice in the church and in theology.

Though Pope Francis has said that this door is closed, his consistent call for open discussion and dialogue, and indeed for open doors, has created a climate where the whole issue of women’s place in the church is now centre stage.

We are all one, and equal, in Christ.

The effort by the Vatican to stifle debate, often by using methods that should never be part of the Christian community, is doing enormous damage to the church.

As the equality of women is being recognised as a given in most aspects of life and in most parts of the world, the church’s exclusion is being seen as a throwback to medieval times, and will continue to cause a major exodus of women from the church.

So the debate must continue; it must be free and open, and given as much time as it takes to achieve some form of consensus, so that when a decision on this difficult issue is made it will be generally accepted; and then, and only then, can real consent be given.

1 Minister for Agriculture Barry Cowen sacked by Taoiseach
2 My aunt never told us that Gran passed away with no will
3 Miriam Lord: Martin blooded as Taoiseach after wielding axe on Cowen
4 Gardaí found naked man on a cross being whipped in Dublin club, court told
5 A US food writer moved to Ireland. Here’s what he found
Real news has value SUBSCRIBE