Susan McKay: Barry McElduff is either a fool or a knave 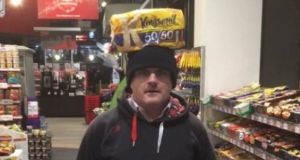 Barry McElduff: His behaviour is, as Alan McBride of the victims group Wave puts it, either “twisted and beyond wicked, or just stupid”.

In 1998, in the heady early days of the Belfast Agreement, Barry McElduff was one of a group of MLAs who were invited to Brussels. After they were wined and dined by the secretary general of the European Commission, Carlo Trojan, McElduff asked a question in Irish. Trojan, who is Dutch, responded that he had not understood. Unionists began to jeer and laugh. McElduff was scandalised, accusing the secretary general of making a show of him.

With more reason, the Tyrone republican was outraged again when DUP MP Gregory Campbell sneered about “curry my yogurt”, and in 2016 he warned that the DUP’s attitude to the Irish language reflected an “active disrespect” which boded ill for the political process.

Now, as we approach the 20th anniversary of the agreement, with the Executive collapsed and talks failed, McElduff, now an MP, has freshly wounded victims of the IRA. He has also damaged his own party and contributed to the growing sectarian rancour which characterises relations between Sinn Féin and the DUP, the parties on whom the future of the agreement depends. All for a stupid joke tossed out on Twitter.

Alan Black is one of the most decent and least embittered people I have ever met. As the sole survivor of the massacre, he feels a keen sense of loyalty to the 10 men who died at Kingsmill in 1976. On the 40th anniversary, he told me that on every January 8th, he sits all day at home by the fire, tormented as he watches the relentless movements of the clock on the mantelpiece: “It is half-twelve now. The boys have five hours and thirty minutes to live. At five they will have half an hour. At half-five, they will be dead.”

Although he suffered multiple gunshot wounds and almost died – a nurse dragged him back from the brink by talking to him about his children – and although he suffered years of depression, he is reluctant to speak of his own pain, preferring to talk about those 10 ordinary, decent men who were joking about football on their way home from work until they saw the red torch of what they took to be an army checkpoint signalling their minibus to stop.

So for Black to say that McElduff’s now infamous tweeted video hit him like “a punch in the stomach” is appalling. He said members of the families of the murdered men were devastated, and some of them have also spoken out. The way Alan Black sees it, on the 42nd anniversary of the massacre, not only did the Sinn Féin MP clown about with a Kingsmill sliced pan on his head, he also stopped beside boxes of Celebrations chocolates. McElduff has apologised but insists he meant no harm, that he did not notice what sort of bread it was, nor connect it with the anniversary – though he did check the sell-by date. We can’t know if he is telling the truth. It was, as Alan McBride of the victims group Wave put it, either “twisted and beyond wicked, or just stupid”.

There is no doubt about the moral calibre of the men who were set upon at Kingsmill. The late Richard Hughes, the only Catholic on the bus that night, never forgot that when the gunmen demanded that the Catholics step forward, the Chapman brothers, Reggie and Walter, on either side of him, each placed a hand on his arm to stop him from doing so. There had been a spate of loyalist murders in the previous days, leaving three of the Reavey family and three of the O’Dowds dead. Alan Black said that the men would have suspected this was another such attack.

The IRA has never admitted responsibility. No one was convicted. The families had to wait 40 years for an inquest, and more questions were raised by it than answered. There was probably at least one informer among the killers. The late IRA hungerstriker Raymond McCreesh was linked to one of the guns used in the attack – there is now a children’s swingpark named after him. (Barry McElduff said McCreesh was a hero who deserved to have got the Nobel prize.) When the late Ian Paisley claimed the Reaveys were in the IRA, Alan Black stood by them and let people know that this was a lie. (Paisley never apologised, even after the Historical Inquiries Team found there was no substance to his outrageous claim.)

The DUP’s cup runneth over in the aftermath of this idiotic incident. Not fit for government, says Sammy Wilson. Sinn Féin has of late claimed that it stands for respect and equality, and that it is because the DUP denies these rights to the non-unionist population that the political process is stalled. But just suppose one of the DUP politicians who thinks he’s funny had posed on the anniversary of the loyalist massacre at the bookies shop on the Ormeau Road with an Ormo sliced pan on his head and then said he was sorry but he didn’t mean to cause offence. Do we think Sinn Féin would have applauded the DUP for scolding him and suspending him for three months on full pay?

The absence of reconciliation has never been more starkly apparent, and as usual, those most hurt in the past are hurt again.

Susan McKay is a writer and journalist