Ten rules for the returning emigrant

Planning on coming home to Ireland in 2018? 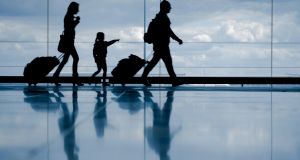 Disapora: never forget that underneath the PR and the branding and rebranding, the novelty socks and the grinning plausibility, this is still a banana republic.

Think again for it will be a mistake

2. If you decide to come back anyway, remember that returning is the Great Irish Solecism. Never forget, we don’t want you. Here in Ireland people talk about the diaspora, write about the diaspora, there’s even a Minister for the Diaspora. The word diaspora originally referred to the dispersal of the Jewish population of Israel around the world. But for Israel, diaspora has its counterpart in “aliyah”, or the return to Israel. You never hear anyone in Ireland talk about aliyah.

There is no Minister for Aliyah. If even a small percentage of the people who have left Ireland, and their descendants, were to return, chaos would ensue. If a sizeable percentage of the Irish diaspora were to make aliyah, the institutions of the State would collapse.

3. Don’t be fooled by the surface welcome, the tears and smiles at the airport. The State has not planned for your return, has made no provision for your health, your housing, your old age, or your children’s right to the education of their choice.

The returned emigrant is not just another hungry snout in the limited trough, but a constant reminder of the existential fragility of the State, the vulnerability of its future. You will always make people a little nervous and resentful. You have failed to obey the holy commandment of the emigrant: stay away.

4. Having returned, do not , under any circumstances, ever mention any experience you have acquired, or anything you have learned, in your time outside Ireland. No thank you, we do not want to hear about the healthcare system in France, or rent control in Berlin, or wind power production in Canada. If you liked it so much, why didn’t you stay there? (Likewise, pretend to not speak any foreign languages. Otherwise people will suspect you of notions.)

5. When you return, do not be amused. In the beginning you will be easily amused by the absurdities and Irishisms. You will be tempted to store them away as anecdotes to dine out upon abroad for years to come. The one about the school which asks you where you go to Mass. The one about the school project which regrets they can’t admit your children because you didn’t put them down on the waiting list when they were born, 15,000km away. Laugh while you still can, but you will pay for it. These people are not joking. Never forget: Ireland will soon wipe the smile off your face.

6. Be prepared for moments of complete disbelief. Remember those people in your class/college year, the ones with the wrong jeans and the middling marks, and the large complacent smiles, the sons and daughters of politicians, solicitors, auctioneers and doctors? Well, in your absence they have inherited the country, as they always expected they would. You gave them a free run.

By staying in the same place, by standing still, they have risen inexorably. Inevitably, you will run into them, and they are not prepared to get out of your way.

7. Do not get into drunken late-night arguments in Connemara hotel bars with a group of dentists from Dublin who tell you the reason the Irish have such bad teeth is that the country is too small to pay for good teeth for everyone. You have to stop referring to Finland or Denmark, or even Iceland.

8. Radically revise your notions of success and failure. In Ireland, nothing succeeds like failure. The top ranks of society, in politics, in the media, in the professions, are filled with people who have consistently failed to achieve anything, except keeping their noses clean and the boat unrocked, and each failure is rewarded with promotion. Get elected to the Dáil, do nothing for years, get promoted to Minister, do nothing for years.

9.Do not, for one moment, believe the hype. Never forget that underneath the PR and the branding and rebranding, the novelty socks and the grinning plausibility, this is still a banana republic, even if they are now digital bananas. The centrality of emigration to the State’s continued existence remains unchanged.

As the Irish politician Brian Lenihan once said “We can’t all live on a small island.” In the event of the always inevitable crisis, it is not social change and a reorganisation of society but emigration which remains the default reaction. You drain off the surplus population and life goes on as normal for the rest. But this is a public secret which must never be discussed.