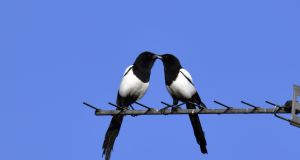 There are magpies clacking away in my neighbourhood. They bounce around from wall to wall, completely oblivious to those crazy two legged creatures, zig-zagging their way along streets and roads.

But then magpies don’t care. They’re big. They’re brash. They’re cocky. And they have far more important things going on. There’s all that hoarding for a start, although, in fairness, those sightings of magpies heading into the distance with a stash of jewellery slung over their wing aren’t as common as you might think.

Birds, of course, generally disappear into an urban landscape and assume the role of invisible city dwellers, seen but not actually noticed – the whole hiding in plain sight thing being a pretty smart strategy, as strategies go.

But now, of course, with nothing to do, they’ve strayed into visibility again.

A robin appeared in the back garden a while back. My two neighbours and I were aahing within minutes. Where is it now? Where did it go? Hey robin, get back here!

We were in the midst of our weekly session of wine-on-the-wall which may explain the tone of the communication above. It’s a BYO (bring your own) which involves the others, to the left and right, leaning over their walls, glass in hand, while I’m on a chair in the middle, the apex of the triangle as such with all of us a good three metres apart. We shoot the breeze for two hours or so.

There is no way we’d have aahed over a magpie. That simply wouldn’t have happened, even though robins, as I was vaguely aware at the time, are fiercely territorial and quite aggressive – their birdsong a veritable expletive-laden diatribe against anyone wandering onto their patch.

But let’s be clear here, we’re not anti-magpie. One of my neighbours waves to any she sees hopping about on their own. She picked up the habit when working in the west. Not sure where. Not sure why. And this only applies to solo magpies. I’ve started doing it as well so, as she says herself, the madness is spreading.

The one good thing about magpies is, of course, that they’re not seagulls. Seagulls are the out-and-out bullies of the air. I was on the laptop in the kitchen the other day, when my neighbour, to the right, called across the wall, wondering if I were free for a moment as there was something afoot. I was out in the garden within seconds.

The air was alive with squawking. A hawk had wandered into the skies overhead and was being unceremoniously shown the door by some mightily irate gulls.

The racket dissipated quickly enough, with the victors getting back to their squatting and strutting.

And it’s not all about garden life. For two days in a row now, a thrush has made an appearance in my local park, each time at the side of the river and each time silent, alert, unmoving, before making a prompt departure. A thrush is an easy one to spot, with its speckled breast. And it is, of course, the Pavarotti of the bird world when it comes to its song. My mother had a thrush in her garden and it brought her untold joy, so each encounter managed to quietly almost surreptitiously lift the spirits.

And for one of those odd synaptic reasons, they also managed to trigger a memory from years ago now, when life was simple and all was right with the world. I was backpacking around Australia at the time, and found myself in a hostel deep in the mountains outside of Sydney.

While out on the veranda, breakfast in hand, a kookaburra appeared on the wooden rail. Kookaburras aren’t a million times removed from magpies when it comes to their interaction with the world but they get a much better press. Aussies see them as plucky and resilient whereas we tend to shove magpies into the aloof, indifferent bracket without a second thought.

Anyway, the kookaburra spotted a worm at ground level and descended in an instant. But another of its species appeared out of nowhere and managed to grab the other end of the clearly doomed creature. A tug of war ensued with neither bird giving it. The whole thing lasted a full 10 minutes, the worm taut and stretched between both beaks, until inevitably one of the kookaburras dropped their guard and the game was up.

But back to our magpies.

Why are they so unlikeable? Maybe it’s the tail, that’s just too tall and too erect for poking around a suburban garden. Or maybe it’s the clacking, the never-ending clacking emanating from trees and roofs. But whatever it is, I’m waving at them now. And one of these days, damn it, they’re going to wave back.

1 Miriam Lord: Not a bare ankle, hairy knee or a Ming the Trouserless to be seen at Covid committee
2 Luke ‘Ming’ Flanagan bares his bottom half to European Parliament
3 Normal People: Full-frontal nudity was not its most radical feature
4 Michael McDowell: Black Americans fear the future and so should we
5 The lockdown was overkill but justifiable in an information vacuum
Real news has value SUBSCRIBE