Time for Government to stand up for equality in education 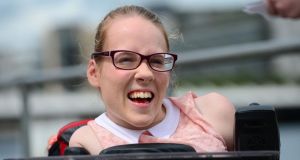 ‘Compare the obstacles facing the average student with, for example, those faced by Joanne O’Riordan, the disability rights campaigner who was born without limbs and who last year got sufficient grades in the Leaving Cert to study criminology at UCC.’ Photograph: Dara Mac Donaill / The Irish Times

A hazard of this time of year is bumping into parents bragging about how many points their children got in the Leaving Cert. It’s not just distasteful, it’s ignorant because it assumes their little darlings deserved what they got.

Anyone who is on nodding terms with reality will know that you don’t get what you deserve in life. Some people are born with severe disabilities. Others suffer physical or psychological damage as they grow up. Others inherit a handy set of genes, and are raised in stable homes where there’s ample money for summer tuition and maths grinds.

Students entering third-level will learn just how little they can credit themselves with getting there if they take a basic module in genetics or neuroscience. And if they study sociology or politics they’ll learn how the notion of “just desert” is, in fact, an ideology: not just that but a very persuasive ideology that underlines today’s neo-liberal and so-called “meritocratic” economy.

Compare the obstacles facing the average student with, for example, those faced by Joanne O’Riordan, the disability rights campaigner who was born without limbs and who last year got sufficient grades in the Leaving Cert to study criminology at UCC. Or with the obstacles faced by the small but steadily increasing number of people with intellectual disabilities who are making it to further and higher education.

These are achievements of genuine note – not just because they say something about the characters involved but because of the huge institutional barriers we have erected in their way.

Enda Kenny is right that some Irish emigrants are reluctant to return home but, contrary to his view, taxation is not the obstacle. If you’re the parent of a child with an intellectual disability you’d be mad to uproot from a well-functioning state to live in a place where you have to cajole, beg and lobby politicians for basic services.

Tellingly, it was Kathy Sinnott, someone originating from the United States and thus uncontaminated by an Irish clientelist mindset, who made us wake up to the reality of how badly we were treating our children 15 years ago. The legal action she took to have her autistic son educated forced the then Fianna Fáil-led government to make schools more inclusive.

It also led directly to the Education for Persons with Special Needs Act (EPSEN) Act 2004, which has turned out to be the biggest joke played on children with intellectual disabilities, and the cruellest one too. The introduction of the Act bought then taoiseach Bertie Ahern and minister for education Mary Hanafin some positive headlines, but the necessary resources never materialised.

By March 2008, as the boom got “boomier”, Ms Hanafin was telling anyone who’d listen that the Act would be implemented in full by October 2010. Five years later, only a few sections of the Act have been implemented and services have been slimmed down by austerity, notwithstanding the recent extension of special needs entitlements to children with “mild” intellectual disabilities.

A troika-imposed measure, which remains in place, means that children with special educational needs receive only 85 per cent of their recommended resource teaching hours. While some schools have introduced Individual Education Plans for children with disabilities, as promised under the Act, they lack effectiveness because funding still follows the service provider rather than the student.

The National Council for Special Education (NCSE) estimated in 2006 that it would cost €235 million a year across the health and education sectors to fully implement the Act. However, Minister for Education Jan O’Sullivan says her department believes the investment required would be greater, and thus it’s not a feasible proposition at present.

Fair enough in one sense. The Government’s doesn’t have unlimited finances. But it does have control over whether or not to make the system fairer, within current budget constraints.

Recommendations by the NCSE last year which would have seen resources tilt away from schools in middle-class areas towards those in disadvantage blackspots were shelved.

Ms O’Sullivan has set up a pilot project to further explore the issue, citing a need for wider consultation. But the decision smacks of a Government terrified of upsetting a core electoral constituency. Moreover it follows a pattern.

Plans by Ms O’Sullivan’s predecessor Ruairí Quinn to reform the student grant system to prevent abuses by wealthy farmers and landowners were torpedoed by Fine Gael. And there’s another challenge on the horizon. Ms O’Sullivan is due to publish in the autumn regulations giving effect to the Admission to Schools Bill, which seeks to combat various forms of discrimination, including that based on disability.

Her initiative has led to a predictable backlash from Fine Gael TDs who on this, and also more recently on issue of school patronage, have effectively told the Minister to shut up and concentrate on the economy.

The next few months will tell us whether this Government is serious about fairness. Or whether it just likes to boast about an economic recovery over which – as any economics undergraduate will tell you – it has had limited influence.