The view from Lesbos: Politicians prevaricate while refugees suffer

‘This humanitarian crisis on the islands, and the political crisis it triggers, could perhaps have been avoided had refugees been able to travel normally, or make applications for asylum at embassies’ 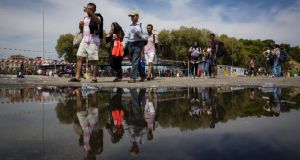 Refugees walk towards a ferry at the port in Mytilini on September 9th, 2015 in Lesbos, Greece. Photograph: Eric Thayer/Getty Images

Last Sunday, on a mountain road on the Greek island of Lesbos, we saw hundreds of people walking in the heat – groups of men, young couples, families with small children and infants, older and injured people. We met Syrians, Iraqis and Afghans in the main. They must walk to get across the island, a distance of 70km, as there is no reception centre or camp in the north of the island where they arrive, and the only place they can register is in the now overcrowded port of Mytilini. Those walking had arrived earlier on rubber dinghies.

All summer, one to two thousand have landed daily, and transport from the island is slow due to bureaucratic hurdles. In the small town of Kaloni, 25km from the coast, and 45km from Mytilini, exhausted women and men asked why they couldn’t take a bus or taxi even though many were willing to pay. We tried to explain it was for legal reasons.

Assistance to those who arrive irregularly is often criminalised. Greek law, like that of many other countries (often prompted by international and EU law against smuggling), prohibits affording them assistance for payment. This means until such people arriving in Greece have papers, any taxi or bus driver who transports them faces stiff penalties. Our taxi driver deemed that law “insanity”. Until recently, the law also prevented assistance without payment. That was amended this summer, so that people may now offer lifts to refugees to spare them the walk.

Tourists are advised by local volunteers to bring water in their cars, as well as nappies and fruit, to help people in distress on the roadside. They help, but it is clearly not enough. Attempts to provide a bus service across the island failed. On Lesbos, it means the boat journey is followed by the long walk.

The lack of transport across the island is due to just one of the many legal barriers refugees encounter when seeking protection in the EU. The EU and its member states have enacted laws that prevent them from travelling legally to seek protection. Visas are required, and virtually impossible for refugees to obtain, and carriers’ sanctions mean that without the right papers, people cannot board the regular ferries and planes that could bring them swiftly to safety.

The lack of safe and legal access to protection has other consequences.

Firstly, refugees now mainly arrive irregularly by sea, with few possessions, and are concentrated on the beaches of southern Europe. Some 200,000 people have arrived in Greece from Turkey so far this year – compared with 43,000 in all of 2014. Formerly, they entered Greece at its land border with Turkey, but Greece built a fence in 2012. There is now a humanitarian crisis on the Greek islands, with people sleeping outdoors, sometimes hungry and suffering from heatstroke because of a lack of co-ordinated response.

As someone who works academically in refugee studies, I was nearby in Turkey when I read the calls for action and felt compelled to go, at least to try to understand. We found ourselves fleetingly a minuscule part of the volunteer effort. Local volunteers have support boat arrivals for years. International NGOs, including International Rescue Committee and Médecins Sans Frontières, have a presence and apparently await local approval to scale up their assistance. Politicians prevaricate – refugees suffer.

Yet this humanitarian crisis on the islands, and the political crisis it triggers, could have been avoided had refugees been able to travel normally, or make applications for asylum at embassies. Their arrivals would then have been dispersed across Europe’s ferry ports and airports. The numbers arriving would not pose a problem. An EU of 500 million people can surely handle the numbers of refugees seeking protection here.

Secondly, arriving in the EU is not the end of the refugees’ difficult journey. Very few opt to apply for asylum in Greece, where the living conditions for asylum seekers are often poor, so bad that the European courts (the Human Rights and the EU Court) deemed them inhumane and degrading, and do not permit asylum seekers to be returned there.

Things are improving, but Greece still offers little asylum. Fewer than 10,000 people sought asylum there in 2014, and 80 per cent of applications were rejected, including 40 per cent of Syrian applicants. So most move on, but there is no system permitting them to apply for visas in Athens for their countries of destination elsewhere in Europe.

On their irregular journey across the Balkans, they are once again in danger. As Amnesty International has documented, they are at “constant risk of exploitation, arbitrary detention and ill-treatment”. Saying goodbye to the Syrian family we had driven across the island on Sunday meant leaving them to this fate: a young couple (both English teachers), the woman’s brother, and their four young children. Their apparent hopefulness and resilience contrasted with my unspoken fear for what might lie ahead when they arrive with thousands of others in Athens, and then move on through the Balkans.

At EU level, things have moved slowly, with no action commensurate with the manifest needs. In April the EU agreed voluntarily to “relocate” 32,256 asylum-seekers from Greece and Italy over two years: only Syrians and Eritreans were deemed to have strongest protection needs. This is completely inadequate, not only due to the restricted nationalities (are we really to say Syrians are more likely to be recognised as refugees than, say, Iraqis fleeing Isis-held territory?), but particularly in light of the scale of arrivals and the fact that the vast majority of those who arrive to both Italy and Greece move on anyway. They relocate themselves, at great personal and financial risk, while EU leaders squabble over who should go where.

EU ministers will revisit their response on September 14th. We all have a voice on this issue – for the people currently on the Greek islands or stranded at points on their journey, we need to respond to the humanitarian emergency, with aid and shelter. Then safe passage onward is crucial.

Many refugees in transit could relocate themselves: if they had travel papers they could at least travel safely, paying normal prices. Some are in urgent need of humanitarian assistance and evacuation. At present they receive little reliable information on what lies ahead, so must rely on smugglers’ misinformation and on their own networks. If they could pause and consider their options, with some independent advice available, they could make their own decisions about where to seek asylum.

Ireland has started to respond with resettlement places. So much more is needed. We could follow the Icelandic example, where citizens outdid their government by pledging support for refugees. Countries must and can step up by offering refuge, and supporting co-ordinated EU efforts for safe passage, safe access to protection, accepting numbers of refugees commensurate with their capacities and the demand for protection. At the moment, for refugees to reach Ireland, most must cross several EU member states, and the Dublin system acts as a buffer. This system doesn’t work, and Germany has rightly suspended its entitlement to use it to send Syrian asylum seekers away. Ireland should do the same, and provide access to protection rather than congratulating itself on its own “generosity”.

Cathryn Costello is Andrew W Mellon associate professor in international human rights and refugee law at the Refugee Studies Centre, Oxford. She was formerly director of the Irish Centre for European Law and a board member of the Irish Refugee Council