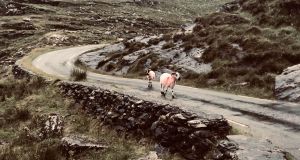 Used to traffic, the sheep of the Iveragh peninsula don’t jump out of your way. Photograph: Frank McNally

There was no Puck Fair in Killorglin this year, for obvious reasons. To misquote Bach, goats could safely graze in the surrounding mountains, for once, without the risk of being kidnapped (or should that be “billynapped”?) for three days and having the monarchy of the town thrust upon them.

But when I spent my stay-in-Ireland holiday there last week, images of the animal were everywhere and even helping to promote Covid awareness.

In the cosy front room of the Bianconi Hotel – preadapted to the pandemic with its panelled-off snugs – diners were overseen by the mounted head of King Puck, wearing a face-mask instead of a crown.

The local restaurants were doing well, fair or no fair. It was the pubs that suffered this summer.

The era of the fair’s 24-hour licences is long gone, but I heard of at least one bar that stays in business from the takings (in normal years) of August 10th to 12th alone.

Back in 1946, infamously, the all-night opening coincided with a visit from Dylan Thomas, who was supposed to write a feature on the fair for Picture Post magazine. The event went ahead as usual that year. It was only the feature that had to be called off.

I didn’t see any wild goats during a week on the Iveragh peninsula, but there were sheep everywhere among the mountains. Not white ones, usually. They were sprayed instead in various lurid colours – pink, or red, or purple, or sometimes a combination of shades to rival the rainbows that were often overhead.

This being shearing season, most sheep were as fleeced as Killarney tourists in high season, although even at their most exposed they can look as lordly as any puck. Used to traffic, they don’t jump out of your way.

It can be unnerving enough just driving through Moll’s Gap or Black Valley without turning yet another blind corner to find a psychedelic-coloured skinhead sheep eyeing you coolly from the road, daring you to take the long way round him, even though the tarmac is not much wider than the car.

Black Valley used to be the sort of place you might describe, in jest, as “darkest Kerry”. But the description was literally true once. The area was not connected to electricity until the late 1970s, a generation after the rest of rural Ireland. Even then, as the prospect of fridges and television sets finally became reality, locals could still only dream about being connected to another new-fangled invention, the telephone.

As I learned only last week, however, darkest Kerry is now an official designation, and Black Valley isn’t in it. Centred instead at the end of the peninsula, near Waterville, the Kerry International Dark Sky Reserve is now one of the world’s leading destinations for “astro-tourism”, its resistance to light pollution offering undiluted views the night sky.

The other revelation of Waterville and neighbouring towns is that the old-style phone-boxes that were everywhere (except Black Valley) in the 1970s are now housing defibrillators.

It’s a clever reinvention, if in one sense unfortunate. Yes, should you have heart problems in Kerry, the vintage phone-box may now save your life.

But this is probably one context in which you won’t want to be put through to the operator.

Another form of local wildlife, which I encountered for the first time last week, is the Valentia Island midge. Based on my experience, it guards the famous slate grotto there like a miniature Cerberus at the gates of the underworld.

Valentia slate was among the glories of Ireland in former times. Its smoothness and the sheer size in which it could be mined brought it to some illustrious places, including the British Houses of Parliament, the Paris Opera House, and the Seraglio of Constantinople. In a later era, it was used even in the Seraglio of Inishvickillaune (I use the s-word there its broader sense of “palace”, by the way, not “harem”), Charlie Haughey’s island house.

But the grotto left behind by all this quarrying is itself a wonder, replete with one of Ireland’s more dramatic Marian shines. Indeed, speaking of opera houses, the shrine was the backdrop some years ago for a staging of Pergolesi’s Stabat Mater. It must have been quite a spectacle.

Unfortunately, our visit was somewhat curtailed by the fearsome midges, which were in full battle-mode. I thought I heard The Ride of the Valkyries playing somewhere as they chased us back to the car and then got in before us. We were still swatting them while recrossing the bridge to Portmagee.

They didn’t let up until we were back in what Valentia natives used to call “Ireland”.

1 US presidential debate: who won, was it any good, were there any surprises?
2 Man unidentified in psychiatric hospital for 30 years may have DNA taken
3 H is for hero: the origin story of Jack Reacher, a billion-dollar brand
4 Google tells workers to return to country where they are employed
5 US election: Joe Biden and Donald Trump clash in chaotic presidential debate
Real news has value SUBSCRIBE