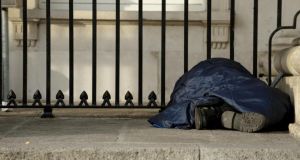 ‘The “blue bag” lifestyle is the only option if a bed is not available from homeless services.’ Photograph: Aidan Crawley

Dublin by night is a very different place to Dublin by day. After 11pm, if you’re socialising in the city, or a night-worker, you will probably see those who are homeless and about to sleep rough.

The “blue bag” lifestyle is the only option if a bed is not available from homeless services. Doorways start to pack from midnight and the call of “soup run” from Inner City Helping Homeless volunteers echoes across the streets.

Street Angels is what one homeless woman calls our volunteers. Back in 2013, a group of like-minded individuals formed what has now become a frontline service across the city of Dublin interacting with the city’s homeless community.

Every night reveals a different tale, as a homeless person tells of not being able to get a bed on the Freephone or not having received a payment from social welfare.

In my experience, there are several types of homeless people. Those who are “entrenched” and either do not want to come off the streets or find it very hard to do so. The “addicted” homeless – those who have a serious drug or alcohol addiction and continue to find it hard to access housing. There are those who suffer from mental health issues and find it hard to access services.

Then there are the “new” homeless. Those are people who are victims of social circumstance or the recession. They include families with young children, those who have lost jobs and have had homes repossessed, and families like the one who became the focus of media attention this week when our volunteers were alerted to the fact they were sleeping out in Mountjoy Square.

Since January, there has been an increase of 55 per cent in the number of homeless families we have seen.

The “count” at the end of each night would determine how many homeless men and women we have come in contact with throughout the night. There has been an increase in the number of women over the last six months – up from 9 per cent to 33 per cent.

Death in a doorway

This incited a frenzy across Dublin with media outlets and politicians wanting to join outreach teams on nightly runs to see what was going on throughout the city. Subsequently the Taoiseach attended, alongside the former lord mayor Christy Burke, who is chairman of Inner City Helping Homeless.

Nearly everyone who is homeless welcomes us and is only too happy to receive a sleeping bag, a cup of tea and a sandwich. It was no different that night. The Taoiseach interacted well and was generally welcomed.

But guarantees were given and promises were made that night. And the following week saw blue-light fire brigade action, with the promise of funding from the department and Minister for the Environment Alan Kelly stating nobody would have to sleep on the streets over Christmas unless they chose to.

Now it seems to me that it was all a bit of a whitewash. We are nine months on and nothing has changed.

However, such accommodation is not always available, because not all hotels will accept payment from central placement.

We are scooping children from the streets in a situation where they have been given sleeping bags by central placement.

Who in this day and age allows a family to leave an office with three young children and sleeping bags? That’s the situation we find ourselves in – and these are the “new homeless” that we are dealing with. The system is inundated, and needs a total overhaul.

It’s hard to contemplate that a family would have to sleep on a park bench if outreach teams don’t pick them up.

That the Dublin City Council central placement service couldn’t provide a homeless family with accommodation this week, due to red tape, shows how the demands on the service have changed in a short period of time.

While the demands change, we as volunteers have to adapt, although under pressure and stretched.

We as volunteers have built our own little community, one that helps another along the way in life. And Dublin’s homeless community depends on the voluntary service that appears on the streets at 11pm every night. Anthony Flynn is director of Inner City Helping Homeless

1 Former Kilkenny hurler dies after bike struck by tractor
2 TV Guide: 29 of the best shows to watch this week
3 Kenneth Branagh: ‘It’s a challenge, Irishness in cinema’
4 Why you still can’t have a European holiday this summer. Or can you?
5 How an exercise programme facilitated the spread of coronavirus
Real news has value SUBSCRIBE