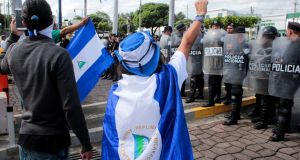 Demonstrators in front of a line of riot police during a protest against Nicaraguan president Daniel Ortega’s government in Managua. Photograph: Reuters/ Oswaldo Rivas

This year Nicaragua should be celebrating 40 years of progress since the Sandinista movement seized power and ousted the repressive Somoza regime. Instead, in a deep irony, it is marking over a year of a brutal government crackdown on protest against the regime of president Daniel Ortega, one of the authors of the 1979 revolution.

In the 1980s, Nicaragua attracted groups of idealistic young Irish activists, known as brigadistas, who helped the cause by picking the country’s vital coffee crop. In the revolution’s aftermath, the Sandinista movement oversaw redistribution of land, introduction of universal healthcare and an effective literacy campaign. Last month, more than 50 of these brigadistas presented a letter to the Nicaraguan ambassador to Ireland objecting to the violent treatment of unarmed protesters and calling for free and fair elections to be held.

As Human Rights Watch has put it, Ortega’s government has been allowed to commit “egregious abuses against critics and opponents with complete impunity”

It’s estimated that more than 500 people have been killed since protests against cuts to social security benefits began in April 2018. At least 60,000 have fled the country and are living in exile. Many protesters remain in prison, despite a government commitment to release them and amid claims of torture.

The country is on the brink of “total economic chaos”, according to Ortega’s long-time former ally Rafael Solís, who resigned from the country’s supreme court earlier this year. As Human Rights Watch has put it, Ortega’s government has been allowed to commit “egregious abuses against critics and opponents with complete impunity”.

This oppressive power, wrested at great cost from the Somoza regime, is now in the hands of Ortega and his wife and vice-president Rosario Murillo. Ortega and his family control all branches of government and the judiciary and the security forces.

Our own president and Ortega’s one-time compañero, Michael D Higgins, must be watching developments with interest, if not horror, as the man who visited the Higgins home for tea in 1989 fails to heed calls for an end to violent repression.

In the 1980s Nicaragua became an exemplar for the aspiration of democracy and the achievements of popular movements. Sadly, la lucha continua.

1 At least eight shot dead in German town of Hanau
2 A Russian cruiser with ‘cannibal rats’: What other ‘ghost ships’ could be out there?
3 ‘If all the immigrants go back, who will work in the meat factories and do the crap jobs?’
4 DUP pleads with UK to reduce salary threshold for migrant workers coming to North
5 I’m worried about my neighbour’s new ‘shed’ and what he intends to use it for
Real news has value SUBSCRIBE