Painter and priest – An Irishman’s Diary on Fr Jack Hanlon 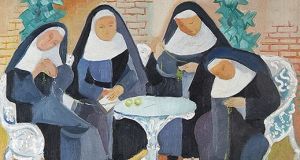 Fr Jack Hanlon was a gifted Modernist painter who contributed to Ireland’s artistic life through his colourful drawings and paintings.

He represented Ireland in international art competitions and left behind a rich artistic legacy which can today be seen hanging in galleries and churches all over Ireland.

Born John Thomas Hanlon in 1913, his family lived in a large Regency house in Templeogue. He attended Belvedere College, where one of his school friends was James White, who would later become director of the National Gallery. Art was not taught in Belvedere at that time, so he had to attend private classes outside of school time.

After Belvedere, he felt a calling to religious life and entered the Dublin diocesan seminary at Clonliffe College, Drumcondra in 1932. He obtained a BA from UCD and was ordained in St Patrick’s College, Maynooth in 1939. After a short time spent as chaplain in Arbour Hill prison, he served in parishes in Dublin and Wicklow up until 1967.

During his studies for the priesthood he continued to paint and took regular trips to the continent during the holidays.

In 1936, he joined the Society of Dublin Painters and exhibited with them the following year. He won a Taylor Art Prize at the RDS in 1937 and in 1939, he exhibited at the New York World’s Fair.

Later that same year, he attended the André Lhote atelier in Paris, a staple for many Irish artists.

Aside from his own paintings, one of his biggest contributions to the advancement of art in Ireland was his involvement in the Irish Exhibition of Living Art (IELA). In 1943, together with his friend, Mainie Jellett, he founded this enterprise to offer modernist and avant-garde artists a platform to exhibit their work outside of the strict confines of the academy. Described as a sort of Salon des Refusées, it gave artists who were denied the possibility to exhibit at the RHA an opportunity to show off their work.

Over the years, Fr Hanlon entered art competitions in Ireland and abroad.

One of the most distinguished contests he took part in was the 1948 Olympic Games in London. It might seem like a strange idea now, but earlier Olympic Games ran art competitions alongside the sports competitions that we are familiar with today. Artists and sculptors from all over the world competed against one another for gold, silver and bronze medals. Their objective was to represent sport in art. The first of his paintings was entitled Preparing for a Day’s Sailing and the second was a study of five jockeys, entitled The Jockeys. Unfortunately, his work was not selected, but the Irish artist, Letitia Hamilton, did win a bronze medal that year.

His painterly skills were recognised in 1955 when he won a $500 prize from the American greeting card company Hallmark. They chose one of his watercolours, Christmas Toys, to feature on their Christmas cards that year.

Another prize came in 1962, when he was awarded the Douglas Hyde gold medal by An Comhairle Ealaíon for a painting entitled Séipéal Chormaic. He painted mainly still life, portraits and landscapes.

When a new church was opened on the naval base on Haulbowline island in 1953, Mass-goers could admire his large painting of Our Lady Star of the Sea which hung behind the high altar. In Carrigart, Co Donegal, he painted a set of Stations of the Cross for the new church which opened in 1955.

While the subject of his art was predominately religious, he also painted other scenes and exhibited them at one-man shows in Dublin and elsewhere. Scenes from the continent, especially France, are very present in his art. Hausmann apartment buildings of Paris, the Tuileries and Luxembourg Gardens, as well as the city of Nice and the town of Menton on the French Riviera, are all on show. He was obviously attracted to hotter climes, once saying he found “Connemara and Donegal too sad and too desolate”.

He was asked to paint a portrait of Lieut Kevin Gleeson, one of the Irish officers who was killed at the Niemba ambush in the Congo in 1960. The portrait was commissioned by the officers of Clancy Barracks, where Lieut Gleeson was stationed prior to leaving to serve on the mission to the Congo.

Fr Jack Hanlon died in August 1968 at the age of 55. One of his contemporaries, Norah McGuinness, said that he was “a very sincere painter and always reflected the bright side of life”. An obituary recalled his training in Paris, where “he had the best of art teachers – help from Matisse himself”. His friend, James White, said that “he was important in the development of modern Irish painting because of his advanced ideas, personal integrity and sympathy to the developments of a new Ireland”.

1 Fianna Fáil may have just pressed the pause button on the property market
2 Eating out in Dublin – the homeless way
3 UK to prioritise EU trade deal over one with United States
4 Which jobs do teenage girls and boys aspire to have by age 30?
5 Independent TD Tommy Broughan announces retirement from Dáil
Real news has value SUBSCRIBE