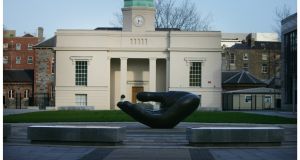 The Department of Education and Skills: The important decisions take place in Marlborough Street. This must stop. Photograph: Bryan O’Brien

Born on the eve of 1971, myself and the Higher Education Authority (HEA) Act are the same age. In the near five decades since, I have lost most of my hair, my waist has thickened, and I sometimes forget things. But I have reinvented myself many times, investing in my education and skills, moving from private to not-for-profit to public sector.

In other words, I have taken active steps to remain relevant. The same cannot be said for the HEA Act 1971.

It was relevant 50 years ago when the HEA’s job was simply to allocate funding to a handful of third-level institutions covering 20,000 students and to provide the odd bit of advice to the then minister for education. Now the HEA’s remit covers more than 200,000 students, allocates funding, provides policy advice and, most critically, regulates the entire higher education system.

It is high time, therefore, that the legislation underpinning one of the State’s most important agencies is brought up to date, to enable it to assist in providing this country with its most precious resource – human capital. For this reason, the Minister for Higher Education and the Department of Education and Skills are to be commended for bringing forward this week detailed legislative proposals for the reform of the HEA Act 1971.

In summary, many of the proposals are good. The role of the HEA shifted fundamentally a decade ago, starting with the Hunt report, followed by the National Strategy for Higher Education and leading to an extension of its traditional funding-advisory role into “regulation” of the entire higher education system.

The problem with the last development – regulation – is that while the policy was agreed and the role conferred on the HEA by Government, nobody thought to update the HEA’s legislation accordingly. And so, in recent years, when the HEA tried to apply certain regulatory actions on some universities and institutes of technology, most notably in the area of mis-governance, it suddenly found it had little or no legal basis to do so.

Higher education institutions and their staff would simply lawyer up and that was the end of it. Sending an agency out to implement Government policy with no legislative underpinning is akin to sending a boxer into the ring with his hands tied behind his back. So, the Minister and the department are entirely correct in aiming to equip the HEA with the tools to implement what is decided by Government. And changing its name from the HEA to the Higher Education Commission (HEC) seems to make sense in that regard.

My bet is that academics will overly focus on the regulatory aspects of the reforms. I am much more concerned by something that has always been a function of the HEA, is proposed to continue as a function of the HEC, but that I have seen precious little of in my time in and around higher education and research.

According to the current and proposed legislation, HEA/HEC is the national advisory body on higher education, develops higher education policy and provides advice to the Minister. In my experience, the HEA’s advice was often ignored by the department, in some cases was unwelcome and sometimes the agency was actively discouraged from developing advice in the first place.

The development of the revised system performance framework, and its scorecard of more than 200 indicators by the department, is one such example of sidelining the HEA. Delaying the publication of the international panel review of teacher education by over a year is another.

What is the point of having a specialist agency, conferring functions upon it and then ignoring or discouraging its advice?

The reform proposals also state that “the department’s primary responsibilities will seek to remove itself from the operational roles as far as possible with these being the responsibility of the HEC”. Best practice in public service usually reserves policy setting for Government departments and policy implementation for their agencies.

Since the recession I have observed an increasing tendency of Government departments to pull operational matters back under their control. As examples, the way in which capital funding and funding for under-represented students in higher education is allocated is tightly controlled by the Department of Education and Skills. There is a thin veneer of HEA involvement, but the important decisions take place in Marlborough Street. This must stop.

The Minister and department should set the policy and principles. Then they should get out of the way (and stay out of the way) and let the HEA/HEC operationalise that policy.

In summary, I think many of the proposed reforms to the HEA Act 1971 are worthwhile. There are some areas, notably research, where the reforms look woolly but, in the main, real thought has gone into their construction and the ambition is high. But the devil will be in the detail of their implementation. And the most important question is this: will the Higher Education Commission be allowed to do its job?

Dr Graham Love is head of higher education and healthcare consulting in Mazars. He is the former chief executive of the High Education Authority and the Health Research Board.