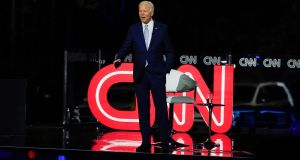 The hope that a Biden victory would allow the world to pick up where it left off in 2016 is wishful thinking. Photograph: Carolyn Kaster/AP

Governments across the world are preoccupied this autumn with two questions, the answers to which will go some way to shaping their fortunes over the coming years. The first is when the coronavirus pandemic will be brought under control, most likely through mass vaccination. The second is whether Donald Trump will win a second term in the White House.

On the first of these, governments are happy to pronounce, to speculate and to try to control public expectations. On the other – Biden v Trump – there is radio silence. Nearly every capital has some level of investment in the outcome of the US presidential election. A minority of leaders, mostly autocrats, including those who run Saudi Arabia, Russia, Brazil, Turkey and the Philippines, hope for a Trump victory. Nearly every democracy yearns for his defeat, even if their leaders decline to say it out loud. I’m told that even in the private sessions at this week’s gathering of Ireland’s ambassadors from across the world, there was hardly a mention of how the outcome of the November 3rd election might affect the State.

Under a President Biden, the tone of Washington’s engagement with the world would transform overnight

The fervent wish among US allies for a Biden victory is rooted in the belief that the Democrat would oversee a restoration of the status quo ante in US foreign policy – that the nightmare of the past four years would turn out to have been an aberration and that normal service could simply resume. That’s at least partly true, of course.

Under a President Biden, the tone of Washington’s engagement with the world would transform overnight. Whereas Trump spurned US allies and courted dictators, Biden the lifelong internationalist would seek to reassure America’s friends and repair frayed relationships. He has pledged to restore Obama-era policies such as the climate accord, the Iran nuclear deal and rapprochement with Cuba. The key positions in US diplomacy would be populated by Obama-era veterans such as Antony Blinken, Kurt Campbell, Ely Ratner and Susan Rice, giving American foreign policy a familiar face after a disorienting four years.

The European Union could count on the White House to take a tougher line on Russia and Turkey as well as on those EU states, such as Hungary and Poland, where the rule of law is under threat. At the same time, a Trump defeat would be portrayed as a reverse for the global far-right; radical populist leaders everywhere from London to São Paulo would find Washington a chillier place to visit.

And yet the hope that a Biden victory would allow the world to pick up where it left off in 2016 is wishful thinking. The world was changing before Trump took office, and it has changed a great deal more since.

America’s inward turn predates Trump and will outlast him. Obama was famously cool on the idea that America could be the world’s policeman; Biden himself, who supported the Iraq war, would later, as vice-president, oppose the Afghan surge and military intervention in Libya. A weary US electorate chose “America First” in 2016, and will expect its next president to concentrate on domestic tasks, especially given that managing the pandemic and the economic recovery will be the priorities.

On China, Biden will be less abrasive and more strategic than Trump, but in substance the policy is unlikely to shift all that much. The early Obama-era belief that Washington and Beijing could form a closer partnership soon gave way to a more hard-nosed approach, informed by concerns about China’s military buildup and trade practices. Seeing China as a geopolitical and economic rival is a bipartisan consensus position.

For all the powers vested in a US president, turning back the clock is not one of them

In Democratic foreign policy circles, the big trends of the past decade – the threat to democracy, the rise of right-wing populism and widespread economic discontent – have prompted a rethink of long-held assumptions. Thomas Wright of the Brookings Institution has noted how “the 2021 Democrats” surrounding Biden, while still believing in a values-based foreign policy, sense the term no longer resonates. Nor do they think America is guaranteed to succeed, or democracy to prevail. They tend to see the world as a more geopolitically competitive place.

Jake Sullivan, Biden’s former national security adviser, and Jennifer Harris, another Obama-administration official, recently argued for reforming trade deals to clamp down on tax havens, block currency manipulation, improve wages and generate investment in the US. On the Middle East, a number of Democratic thinkers “now openly question whether the region is worth the high levels of military engagement the United States has maintained for decades”.

Whereas the Obama administration largely cleaved to the post-Cold War neoliberal consensus on globalisation, Wright suggests, a Biden presidency could, if the views of policymakers such as these prevail, change Democratic foreign policy in significant ways.

If Trump loses in November – and it remains a big if – much of the world will breathe a sigh of relief. But reassuring as it might be to US allies to see Biden in the White House, they will soon find that, for all the powers vested in a US president, turning back the clock is not one of them.

1 One hundred Irish retailers for all your online Christmas shopping
2 Level 5: Fines for house parties and breaching 5km rule, while permitted funeral attendance up to 25
3 Extra day to Dáil debate on extending State’s powers during pandemic
4 Thirteen further deaths and 1,269 new cases of Covid-19 recorded in the Republic
5 School ordered to reopen after closing due to Covid-19 fears
Real news has value SUBSCRIBE