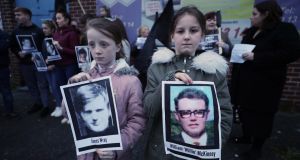 On June 15th, 2010, I stood in the headquarters of 38 (Irish) Brigade in Lisburn, watching David Cameron present the findings of the Saville inquiry in the House of Commons. Meanwhile, relatives of those killed by British soldiers watched on a large screen outside the Guildhall in Derry, the city where Bloody Sunday happened on January 30th, 1972. I had lived in Northern Ireland since March 2007 and, having a Northern Irish girlfriend, I felt a close affinity with the country. I loved the place, the people and my work as an army officer. Cameron said the killings were “both unjustified and unjustifiable, it was wrong”, that the soldiers had fired first and that they had fired on fleeing, unarmed civilians. I felt nothing but shame.

That feeling of shame returned on March 14th when soldier F, one of the parachute regiment soldiers questioned by the Saville inquiry, was charged with murder after nearly nine years of investigation by the public prosecution service in Northern Ireland. It wasn’t the fact he was charged that brought shame, nor that others weren’t charged with murder (though I was disappointed only one would face that charge). I was ashamed by the huge volume of veterans and serving soldiers and officers who defended him.

A friend who served as an army officer and left the same time as I did, noted that at the Royal Military Academy Sandhurst and as a junior officer, he worked with colour sergeants, warrant officers and late-entry officers who had served in Northern Ireland as junior soldiers. Many of their stories about Catholics being verbally abused, dragged out of cars at checkpoints and beaten, were appalling. While most of them were recounted with a sense of regret and guilt about the army’s actions (albeit often tinged with bravado), it highlighted that as well as the undoubtedly brave performance of many soldiers, serious crimes were also committed. Both of us are aware from colleagues about incidents in Iraq and Afghanistan which revealed a more recent, but as casually brutal ‘us and them’ approach to killing ‘the other’.

Despite the evidence laid out by the inquiry, former army officer and now MP Johnny Mercer went on television to claim the Saville inquiry was biased, while military dinosaurs such as Col Richard Kemp were wheeled out to pass judgment on a military he hasn’t been relevant to in 15 years. Former Tory MP Louise Mensch stepped out to claim she was “with soldier F”, despite not having a basic understanding of the Saville inquiry nor of what the roles and responsibilities of a soldier are.

Many veterans purported to justify the killings under the so-called “yellow card” rules of engagement, which provided guidelines on when a soldier could shoot in Northern Ireland. These instructions included the line: “You may fire after due warning against a person carrying what you can positively ID as a firearm, but only if you have reason to think he is about to use it for offensive purposes.” None of the soldiers on Bloody Sunday was under fire and no weapons were positively identified. While there are other rules which allow a soldier to open fire, none was applicable to the circumstances the paras found themselves in.

Another assertion is that the soldiers were following orders. Soldier F stands accused of killing several people, including shooting Patrick Doherty in the back, then Barry McGuigan in the head as he waved a white handkerchief and tried to help Doherty. No one ordered him to do that. In any event, every soldier is trained to know that they are accountable for their actions; “I was only following orders” has not been a legitimate defence since Nuremberg. Soldier F should have rejected such an order if it was received, and any commander who issued it should also be charged with a criminal act.

The whataboutism arguments that ‘the terrorists committed murder, and so why should soldiers be held to account?’, should not be entertained. Compromises were carefully considered as part of the Belfast Agreement; this is true of almost all peace agreements in history. While mistakes may have been made with so-called comfort letters, this should not be a macabre competition about which side should be allowed to ‘get away’ with the most murders. Some British soldiers used their positions to kill innocent civilians. They lied about it and were protected for decades. We should all find this abhorrent. Clearly, this doesn’t forgive the actions of those in the Provisional IRA, Official IRA or loyalist terrorist groups. Anyone who committed murder against soldiers or civilians should equally be held to account under the law and according to the Belfast Agreement.

The soldiers serving on Bloody Sunday were under testing circumstances. Many were young, inexperienced soldiers who were let down by their commanders. It’s easy to judge the circumstances they faced from the comfort of home and nearly 50 years of hindsight, but that cannot serve as a reason to excuse their actions. The only thing separating the British army and its soldiers from the enemy on the battlefield are our values and standards.

The British army defends civilians, rescues the wounded and protects those who are unarmed. It does not, it must not, knowingly kill defenceless people and justify it through a myth of the perfect soldier. Senior officers need to make this extraordinarily clear and not doing so demonstrates a lack of moral courage and integrity, the two highest regarded values of an officer.

1 Teenage boy dies at Powerscourt Waterfall in Co Wicklow
2 Fresh investigation into the murder of Michaela McAreavey in Mauritius
3 ‘I wandered around Dublin wondering: Is this what they call a capital city?’
4 ‘There were times I had to step outside to hide my tears, take deep breaths and then carry on’
5 Coronavirus: 50 new cases as Glynn says phase four delay disappointing for many
Real news has value SUBSCRIBE