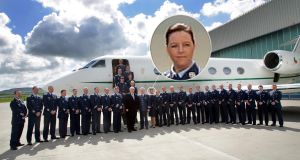 Lisa Smith from Dundalk (to right of taoiseach and Chief of Staff) converted to Islam and moved to Syria. Photograph: Bryan O’Brien

Lisa Smith, the 37-year-old Irish woman and former soldier who married an Isis fighter and now wants to return to Ireland, is emblematic of a problem facing the West. What caused people to choose such a vicious ideology?

And what is now to be done, particularly with the women and minors who embraced the Caliphate and are now left destitute in various camps?

Taoiseach Leo Varadkar has been adamant that Smith will not be left stateless but that she will face investigation and possible charges on her return.

While Smith’s situation is unusual in Ireland, women like her are far from rare elsewhere.

Described by former minister for justice, Dermot Ahern, as a “lovely girl” who was great fun when he encountered her working on the Government jet, how did she end up converting to Islam and moving to Syria?

Only Smith can tell us what really happened but an interview some eight years ago gives hints. Apparently, a long-term relationship broke down, leaving her searching spiritually, trying everything from reiki to angels. She was impressed by the calm peacefulness of some Muslim women whom she knew and began to devour the Qur’an.

Thus far, it is a standard conversion story. But how did she become radicalised to the extent that she chose to move to Syria?

The mechanisms of radicalisation are complex but several drivers have been identified, including by the International Centre for the Study of Radicalisation (ICSR) at King’s College, London. One of the first stages is having a grievance, a sense of a thwarted identity or of being marginalised. Another is having significant unmet needs for a sense of belonging, community, power or glory.

The next step is meeting representatives of an ideology that makes sense of the grievances and needs. This ideology identifies a scapegoat for the perceived problems and provides a glorious cause with which to ally oneself.

Socialisation is key, particularly in groups clustered around charismatic figures, even if the initial contact is online. The next step leads to either involvement in violence or becoming a fellow traveller.

These are mechanisms with which we should be familiar in this country but two extraordinary factors in relation to Isis are the degree of barbaric violence with which it is associated and the amount of people it attracted from overseas. According to the ICSR, by 2017 at least 41,490 international citizens from 80 countries had become affiliated with Isis in Iraq and Syria. About a quarter of these were women and children.

Some, of course, were simply disengaged young men with a history of petty crime and anti-social behaviour who saw a means of achieving a kind of status unavailable to them at home.

Smith, at least initially, does not seem to fall neatly into this schema. She seems to have been that most old-fashioned of beings – an idealist, looking for a simpler, purer way of life. But when confronted with the brutal reality of what Isis was doing, how did that idealism not crumble? She was not a teenager but a grown woman.

How many more babies and children will become collateral damage?

Quite rightly, there have been calls for her to face the music when she comes home, including criminal penalties. But her child is innocent, just as the three babies who were born to Shamima Begum, the teenager repudiated by the UK, were innocent. The third of those babies has now died.

The degree of guilt of an indoctrinated teenager is a matter of controversy but it was shameful of the UK to deny help to a baby. How many more babies and children will become collateral damage?

Not that anyone should presume that repatriating these radicalised women and children will be easy. Women are significant agents of radicalisation as well as victims of it. The last thing that is needed is a naive approach or a presumption that these people will be able to adjust to life in a society that they see as inherently corrupt and antithetical to their beliefs.

Smith must of course take full responsibility for any crimes she has committed or condoned but her story raises questions for secularists, Catholics and Muslims alike. She has said that there was an emptiness about her party lifestyle that left her feeling as if her life lacked meaning.

In the West, there has been a progressive loss of a sense of transcendence and often a kind of mockery of those who seek such meaning. In Ireland, in particular, we often want people who raise such questions just to shut up and have another drink.

Equally, Smith was raised as a Catholic. Yet when she longed for meaning and spirituality, it appears that it never occurred to her that Catholicism was a possibility. What does that say about the state of our Christian communities?

Finally, the Muslim community will be wondering why someone who was a recent convert was not supported in staying away from the violent, radicalised barbarism of Isis.

None of these questions in any way justifies any one individual’s decision to embrace a repulsive, rapacious ideology like that of Isis. But they remain vital questions, nonetheless.