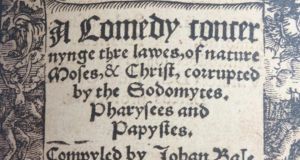 Ireland’s oldest public library, Marsh’s, has never been in the business of lending books. Since it first opened, in 1707, scholars have had to do their reading on the premises, sometimes locked in cages. So, in theory at least, the collection was never susceptible to a phenomenon librarians call “churn”.

This is a marine metaphor, referring to tides washing in and out, or in the case of libraries to the two-way flow of books, which results in some inevitable erosion as material gets lost, forgotten, or otherwise goes missing.

With his weakness for apt surnames, James Joyce enjoyed the one bequeathed by Archbishop Narcissus Marsh.

In Ulysses, he likened Marsh’s Library to a “stagnant bay”, where nothing left and not much entered, with most of the collection having been assembled before 1750.

And maybe it was stagnant by Joyce’s time. But for much of its history, if Marsh’s resembled any Joycean waterway, it was the river Liffey. For in the 133 years after its foundation, as confirmed by a series of stock checks culminating in 1840, no fewer than 1,185 books, pamphlets, and manuscripts flowed out of the original collection, to places unknown.

An impressive 6.5 per cent of the total, this loss rate was a back-handed compliment to the Archbishop’s mission to enlighten Dublin. His readers were light-fingered, if nothing else.

Current library keeper Jason McElligott is fortunate to work in an era when the river has long silted up. But he jokes that, as in Fight Club, where the first rule is that you don’t talk about Fight Club, the equivalent taboo in libraries is that you “never talk about theft”. So Marsh’s is breaking this in dramatic style with its latest exhibition, a reflection on centuries of literary larceny, “Hunting Stolen Books”.

There are obvious limits to such a project. McElligott mentions a former deputy keeper, Dr Robert Travers, who “haunted the second-hand bookshops” of Dublin in search of the missing material. But most of the material remains just that, and is less visible even than Archbishop Marsh who, according to tradition, continues to appear in the library on occasion.

The exhibition must instead concentrate on the relatively few books that have turned up, or been replaced.

Examples of the former include one dated 1538, with the racy title A Comedy concernynge thre lawes, of nature Moses, & Christ, corrupted by the Sodomytes, Pharysees and Papystes. Only three copies survive, the other two being in England. So when a Prof Todd of Trinity College found one in a Dublin bookseller’s sometime circa 1841, it turned out to be Marsh’s,missing since 1767.

Another star of the exhibition is a 16th-century copy of the work of Claudius Galenus, a Greek-born physician of the Roman Empire. It disappeared from Marsh’s at a distant date unknown, then turned up in 2012 in a Harolds Cross junk shop, where the lawyer Patrick Gageby found and rescued it for the library, a process that inspired his wife Amanda Bell to write The Lost Library Book, published this year.

Also featured in the show is an entertaining fraud entitled An Historical and Geographical Description of Formosa (published 1704), by George Psalmanaazaar. Formosa is now Taiwan, and the preposterously named Psalmanaazaar affected to be a native of the then mysterious island. But like the pseudonym, his descriptions were entirely fictional.

This didn’t stop the book being an 18th-century best-seller, while a further measure of its popularity was that it was stolen from Marsh’s, never to be returned. The copy they have now was bought in 1925.

Psalmanaazaar had meanwhile earned more lasting literary fame by being mentioned in Jonathan Swift’s A Modest Proposal. He may also have helped inspire Gulliver’s Travels.

Swift was a regular visitor to the library, which was next door to his cathedral, St Patrick’s. And far from being a book thief, he became a net contributor to the collection.

But he did arguably take something from Marsh – his character. In a scurrilous epitaph – written in advance, before the Archbishop’s death – Swift scoffed at the old man’s reputation for great learning. He compared him to a rusty chest in a bank vault, which was heavy and presumed full of gold, but couldn’t be proven otherwise because the key was lost.

And he didn’t stop there. If you’re visiting the exhibition (which runs for the rest of 2017) and see Marsh’s ghost among the shelves, don’t stand too close.

According to Swift, he also had an aversion to washing, “so that the most honourable place at his table is much the worst, especially in summer”.

1 Mother of McGinley children who were found dead is arrested
2 Miriam Lord: Sinn Féin goes arthouse for Everybody Can Have Everything manifesto
3 Election 2020 fact check: Do banks in Ireland pay no tax?
4 Woman who gave birth on Dublin street remains in hospital
5 ‘In Ballyhaunis there were Arab people all around me’
Real news has value SUBSCRIBE