Issues of data access, redaction and early-life information must be refined for Ireland 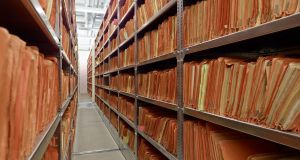 An Irish archive would differ from the Stasi because it would hold many family records. Copies of adoption and early-life files might be held both by the archive and a future adoption information and tracing service.

The Government recently expressed support for depositing records of historical institutional abuse in a formal archive. One role model in how to deal with this is the Stasi archive which holds records of the East German secret police.

It traces its history to social movements which fought for freedom of information. Its governing commissioners have been drawn from the ranks of those the Stasi abused. Its practice is consistent with the same EU data protection law (GDPR) that applies in Ireland.

Some survivors worry that an equivalent Irish archive would enable academics and journalists to exploit their personal records. However, the Stasi archive distinguishes between accessing one’s own records and conducting research. Affected individuals can access their own files, with only limited redaction.

Researchers, by contrast, do not get unredacted access to the files of a living or recently deceased individual whose rights were violated by the Stasi, without that individual’s written consent. Rarely, professional, ethically trained researchers may obtain permission to view unredacted records without individual permission, but cannot publish or share the identifying information those records contain.

When an individual receives their file from the archive, the names of Stasi employees and collaborators are not usually redacted. However, the names of others who suffered rights violations are withheld by default. Anyone can publish or share information contained in their own file, within the limits of the existing law. For example, in Germany as in Ireland, false allegations of involvement in past abuse already fall under defamation law.

This framework distinguishes between those who participated in and benefited from rights violations and those whose rights were violated. People who worked for or collaborated with the Stasi can also inspect and receive their own records. However, they are not given equivalent control over others’ access to their files. They may submit additional materials to the archive, and the archive’s commissioner is required to verify and correct any errors in its records.

Rather than impose blanket restrictions on a massive body of documentation, the Stasi archive considers each individual’s request for their records on a case-by-case basis. Ireland, by contrast, ensures near-secrecy for alleged perpetrators, living and dead, by tightly controlling survivor access to the archives assembled by historical abuse inquiries (so-called “sealing”) for decades. The Government says sealing preserves archives for the future. However, it also deprives survivors of their personal data and denies them the full benefit of investigative work facilitated by the State and funded by the taxpayer. It reinscribes old violent hierarchies and exclusions by reminding survivors that the State controls how they can relate to their past in the present.

“Sealing” is sometimes said to be legally required, as an extension of confidentiality protocols applied during certain investigations. This argument is weak. It does not address witness testimony or the historical administrative records (eg correspondence, contracts, accounts) considered by the investigation. Data protection law does not permit the Government to obstruct access to decades-old records merely because a modern inquiry has considered them. Neither does it justify withholding copies of witnesses’ own testimony from them. More importantly, the Government has not explained why “confidentiality” should apply so forcefully either to documentation of recognised human rights abuses, or to documents which establish individual identity.

An Irish archive would differ from the Stasi archive because it would hold many family records. Copies of adoption and early-life files might be held both by the archive and by a future adoption information and tracing service. Some commentators assume that where an adoption took place in the context of human rights abuse – for instance unlawful family separation – the State should restrict adopted people’s access to their records. However, information about one’s birth, parentage, wider family and early life is fundamental to one’s identity.

Birth certificates are held as public records by the General Register Office. As in Germany, all adults born in Ireland, adopted or not, should be entitled to access their birth certificate. Under international human rights law, knowledge of what happened to disappeared family members is also essential to ending the continuing human rights abuse of unlawful family separation. This principle applies to all members of the separated family. Following the Stasi archives model, the names of public officials, professionals and religious actors involved in abuses such as family separation or forced medical treatment would not be redacted from records released to adopted people.

The Government says that any future archive will be administered to the “highest international standards”. Those standards are demanding. The striking contrasts with Ireland’s existing practice should give pause for thought.