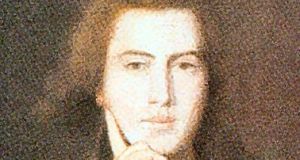 The phrase “the Emerald Isle” to describe Ireland is well known but what may not be as well known is that the man who is credited with first using the phrase was a doctor, poet and founder member of the Society of United Irishmen. His name was William Drennan and he died 200 years ago on February 5th.

He was born in May 1754 in Rosemary Street in Belfast where his father, Rev Thomas Drennan, was minister of the First Presbyterian Church there. The father had been educated at the University of Glasgow and his religious convictions had a strong influence on his son’s radical ideas. Of his father, he later wrote: “I am the son of an honest man, a minister of that gospel which breathes peace and goodwill among men, a Protestant Dissenting minister, in the town of Belfast, whose spirit I am accustomed to look up to, in every trying situation, as my mediator and intercessor in heaven.”

William Drennan followed his father’s example by enrolling in the University of Glasgow in 1769, where his main interest was philosophy. Having graduated in arts, he went on to study medicine at Edinburgh. Following graduation, he practised in Belfast, specialising in obstetrics. He is said to have been among the first advocates of inoculation against smallpox and of handwashing to stop infection spreading.

Like many of his fellow Ulster Presbyterians, Drennan supported the American colonists in their battle for independence from Britain and while practising in Belfast and then Newry, he joined the Volunteer movement that had been set up to defend against a possible French invasion of Ireland.

The Volunteers grew into a strong representative force which came to reflect a form of Protestant nationalism, campaigning for political reform in Ireland.

This resulted in Henry Grattan and others achieving a measure of legislative independence for the Irish parliament in Dublin in 1782.

However, Drennan soon lost hope in that parliament’s willingness to go far enough along the road to reform and he came to national attention in the mid-1780s with the publication of his Letter of Orellana, an Irish Helot, which advocated radical political reform, Catholic Emancipation and other civil rights. He went on to plan, with others, for the establishment of an organisation that would bring these changes about.

He had moved to Dublin in 1789 and two years later he and his brother-in-law, Sam McTier, wrote the manifesto of what became known as the Society of United Irishmen, which Drennan co-founded with Wolfe Tone, Thomas Russell, Samuel Neilson, Henry Joy McCracken and others. It was inspired by the ideas of the French Revolution and Thomas Paine’s Rights of Man.

With Britain at war with France from 1793, the Dublin Castle authorities feared the United Irishman would foment revolution in Ireland and Drennan was arrested on a charge of seditious libel in 1794 over an address he had written for the Dublin Society of United Irishmen.

His lawyer secured his acquittal but government oppression was turning the United Irishmen into an underground, secret movement and driving it towards violent rebellion.

Although Drennan wrote The Wake of William Orr after the hanging in 1797 of a Co Antrim farmer for allegedly administering the United Irishman oath, he gradually withdrew from the movement and took no part in the 1798 Rebellion. However, he strongly opposed the Act of Union.

In 1800, he married Sarah Swanick, a wealthy Englishwoman from Shropshire. They had a daughter and four sons. He returned to Belfast in 1806, retired from medicine but remained active on many fronts, among which was founding and editing the radical Belfast Monthly Magazine. Believing in non-sectarian education, he co-founded the Belfast Academical Institution in 1810. It was a pioneering attempt to bring secondary and higher-level education to the city to students from across the religious divide but, unfortunately, did not achieve that ultimate goal.

Although not prolific, he wrote some memorable and moving poems, among them When Erin First Rose, with that first reference in print to this island which has endured: “Nor one feeling of vengeance presume to defile/ The cause, or the men, of the Emerald Isle.”

Before his death in 1820, and in keeping with the principles by which he lived his life, he directed that his coffin be carried by an equal number of Catholics and Protestants, with clergy from different denominations officiating.

Among his illustrious descendants were Thomas Andrews, who drew up the plans for the Titanic and perished on its maiden voyage, and JM Andrews, second prime minister of Northern Ireland.

1 Cardiologist saved by paramedics after heart attack at Dublin Airport
2 Love Island tribute to Caroline Flack hides the truth
3 How can I view my dead brother’s will if I’m not the executor?
4 David Baddiel comes to Ennis to meet a Holocaust denier
5 Q&A: How long could it take to form a new government after Election 2020? Could things get messy?
Real news has value SUBSCRIBE