Sponsors bring a powerful new dynamic in times of controversy

Relationship between sport and sponsors often driven by public response 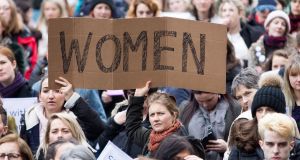 People take part in a protest in Dublin, in support of the woman at the centre of a rape trial after two Ireland ruby players were acquitted. Photograph: Tom Honan/PA Wire

Will Paddy Jackson or Stuart Olding every play rugby for Ulster – or Ireland – again? The IRFU and Ulster Rugby announced as soon as the trial ended that the two would remain suspended pending the outcome of a review “in line with existing procedures for all contracted players.” In the background here will not only be the view taken by the rugby bodies and the terms of the contracts, but also the issue of sponsorship. Because in sport, in media, the arts and many other areas, sponsorship is the vital financial cog which can never be ignored.

You can argue back and forward about the impact of sponsorship and the hidden power of the sponsor. But from rugby in Ulster to cricket in Australia and even radio in the United States sponsorship has been a part of stories unfolding this week. And while the transparency of sponsors influencing what happens can be lacking, it is also a way that public opinion can have an impact.

The #Ibelieveher public gatherings this week and the outpouring of opinion on social media will have been noted both by Irish rugby and its sponsors and will feed via them into whatever decision is made. The two men are contracted to Ulster Rugby until next May and are paid by the IRFU. It looks unlikely that either of them will pull on the Ulster jersey again, though of course we must await the review outcome. There is speculation they may go to play overseas.

It would be ridiculous to suggest that sponsors will be the only factor driving whatever decision is made by the reviews, but equally it would be naive to pretend it would not be an important consideration. Like all major sports, top-level rugby is now deep into the well of sponsorship. Ulster Rugby has a main sponsor, Kingspan, and also a kit sponsor, three shirt sponsors , 13 official sponsors, 10 domestic sponsors and 16 official partners. The companies involved are the predictable mix of banks, lawyers, phone and power companies, food firms and so on. All will be conscious of their corporate reputation. In total they provided £2.5 million of Ulster Rugby’s total income of £9.8 million last year.

The IRFU, meanwhile, lists €10.5 million as coming from commercial income last year out of total revenues of €73 million. It lists 19 sponsors on its site, including high-profile deals with Vodafone, Guinness and PwC and the naming rights deal on the Aviva stadium which is allowing it to feed €8.3 million into its income stream over a period of years.

Elsewhere this week the role of sponsors has been front and centre. In the soap opera that the Australian ball-tampering row has become, financial group Magellan has withdrawn its naming sponsorship from Australian cricket, saying that what happened was “so inconsistent” with its values. A string of big companies – the like of LG Electronics and the Weet-bix breakfast cereal – have also withdrawn personal sponsorships from the players at the heart of the controversy.

In the US, meanwhile, sponsors have been scrambling to end their links with a Fox News TV show hosted by controversial host Laura Ingraham, after she tweeted that one of the survivors of the high-school shooting in Parkland, Florida , in February – in which 17 people died – was “whining” about not being accepted for US colleges. After a tweet by the survivor, David Hogg, identifying the sponsors, at least seven moved to cut their ties, including TripAdvisor, Hulu, a streaming company, Nestlé and Johson & Johnson. By the time Ingraham apologised, “in the spirit of Holy Week”, the damage was done.

Sponsors are increasingly bringing a new dynamic into sports, media and the arts, the three sectors where they are most prominent. They are seeking more than publicising their name; they want to attach themselves to a winning rugby team, a popular radio show or a theatre production in an attempt to link their brand to a positive public vibe.

The flip side is that sponsors will run a mile if they fear something will reflect badly on them or is not, to use the marketing jargon, “aligned with their brand”. Radio hosts now come and go, not only due to listenership figures but also because something they said is judged to have crossed the line of normal controversy and sponsors and advertisers start running. TripAdvisor said Ingraham had crossed “the line of decency”. Media of all sorts now has to try to create new sets of rules so that listeners, readers and viewers understand where the line is between sponsorship and independent content.

Sponsors sometimes see a value in flexing their muscles publicly, too. In the Australian controversy, the owners of Weet-bix, while dropping player sponsorship, is continuing its sponsorship of the national organisation. However, in its statement it said “we have requested that Cricket Australia move quickly to restore integrity to the game”. But of course the real discussions – the tic-tacking about what is acceptable to sponsors – will go on behind the scenes.

Sponsors are now an increasingly important – and generally silent – power. They don’t quite have a seat at the board, but those who make the decisions cannot dismiss their views, particularly in times of controversy. This can sometimes be welcome – putting pressure on the organisation involved to respond to legitimate public concerns – or sometimes potentially dangerous, for example if it caused media to shy away from giving air to unpopular or controversial opinions. But it is what it is.

Sponsorship is vital in sectors which are often financially pressed and by its nature is volatile. It if often the crucial swing factor guaranteeing financial sustainability. And, as ever, when the big decisions come to be made, money talks.