Spineless Dáil exposed by its rejection of trade deal 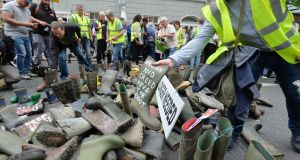 Farmers protest outside the Dáil in early July when the Mercosur agreement was announced – under it, the EU agreed to accept 99,000 tonnes of South American beef each year. Photograph: Alan Betson

The Dáil vote to reject the Mercosur deal last week demonstrated that Irish politicians are capable of being every bit as foolish and cynical as their counterparts in the House of Commons.

By a majority of almost two to one, our TDs backed a policy which, if implemented, would undermine the basis of our prosperity.

What was most striking about the vote against the EU trade deal with South America was not the stance of Sinn Féin and the hard left, who oppose free trade deals as a matter of principle, but the spinelessness of so many mainstream politicians who either didn’t understand the fundamental principle at stake or, even worse, didn’t have the courage to defend it.

The fact that just one speaker, Heather Humphreys, made a strong case for the benefits of international trade says all that needs to be said about the sorry state of the  Dáil

The whole performance raises worrying questions about how the political system will respond to the next serious crisis that hits this country. Given the prospects of a no-deal Brexit, that could happen in the very near future.

It also suggests our politicians are incapable of taking crucial decisions on serious issues like the reform of the health or pension systems.

It can be argued that the passing of the motion rejecting the Mercosur deal by 84 votes to 46 was a meaningless gesture. Dáil motions do not have any legislative force and do not commit the Government to adopting them as official policy.

However, the symbolism of the Dáil decision cannot be ignored. The fact that just one speaker in the entire debate, the redoubtable Minister for Enterprise, Heather Humphreys, made a strong case for the benefits of international trade on which this country relies says all that needs to be said about the sorry state of the current Dáil.

While the other 45 TDs present voted in favour of an amendment proposed by Humphreys, only one of them spoke in the debate. That was Minister for Agriculture Michael Creed who started by congratulating Sinn Féin for putting down its motion.

Nobody else from Fine Gael bothered to speak. Maybe this should not have been a surprise given the party’s supine stance from the very beginning in the face of the bluster from the Irish Farmers’ Association.

Even the party’s MEP and vice-president of the European Parliament, Mairead McGuinness, who should have known better, expressed her doubts about the deal in an effort to curry favour with the IFA.

Fianna Fáil, the Labour Party, the Greens and the rest of the Dáil had the field to themselves as they inveighed against the deal and enthusiastically supported the Sinn Féin motion, displaying a level of ignorance not simply about Mercosur but about the nature of the Irish economy.

The real threat to the living standards of the Irish people today comes not from the EU trade deal with South America but from the shift to protectionism espoused by US president Donald Trump and a variety of populist leaders around the world who thrive on whipping up narrow nationalism.

Humphreys attempted to put some reality in the Dáil debate by pointing out that, as an island nation on the edge of Europe, Ireland has been a major beneficiary of the ability to trade internationally and of our membership of the EU. “Free trade has transformed this country from the isolated and impoverished state we were in the 1960s. Many in this House are rightly critical of the protectionist policies that are currently being pursued in the UK in terms of Brexit and by the current administration in the US. It is ironic that some of those same people are the first to dismiss an international trade agreement which opens up access to a market of 265 million consumers without giving it any level of detailed scrutiny.”

There might have been some excuse for the TDs if the Mercosur deal really is the disaster for Irish agriculture claimed by the IFA but it is nothing of the kind. The beef industry is already in difficulties and in need rationalisation but that will happen one way or another long before the free trade deal takes effect.

Another argument widely cited by opponents of Mercosur in the Dáil debate was that it would promote the destruction of the rain forest in the Amazon. Ireland’s EU commissioner Phil Hogan has effectively debunked this claim pointing out that one of the principles of Mercosur is that trade should not happen at the expense of the environment or labour conditions but should be based on sustainable development.

Like Ireland, the Mercosur countries are committed to implementing the Paris global warning agreement, while Brazil has included specific commitments on preventing deforestation of the Amazon. Whether they, or us for that matter, live up to those commitments is another matter but that has nothing to do with Mercusor.

Fundamentally what the Dáil debate on Mercosur showed is that our political system is increasingly dominated not by concerns for the common good but by the demands of small vocal minorities who quite often don’t even know what they are talking about. Irish politicians who complain about the way Boris Johnson and Jeremy Hunt are pandering to the prejudices of the Conservative party membership should examine their own consciences before pontificating about the failure of politics in the UK.