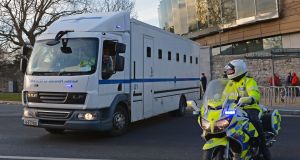 The murders of David Byrne and Eddie Hutch snr have pitched the Special Criminal Court into the general election campaign.

Minister for Justice Frances Fitzgerald has announced that a second Special Criminal Court will open in April. Sinn Féin leader Gerry Adams has called for its abolition. Taoiseach Enda Kenny flatly rejected that call. “What’s at stake here is the security of our State,” he said.

National security has provided a premise for the Special Criminal Court since its foundation. But the law does not require any security assessment.

Article 38.3.1 of Bunreacht na hÉireann says: “Special courts may be established by law . . . where it may be determined . . . that the ordinary courts are inadequate to secure the effective administration of justice . . . ”.

The really extraordinary thing is that declaring our ordinary courts inadequate has become routine.

Sinn Féin would surely have preferred to avoid a national security debate during this election. When Adams mentions his party’s longstanding opposition to the non-jury court, it is hard not to wryly raise an eyebrow. On the other hand, attempts by the Taoiseach to link events in the Regency Hotel to the current Sinn Féin leadership appear opportunistic.

Once the backlog is resolved we should then consider broader questions about the court: are the ordinary courts inadequate? Is Ireland ill-suited to jury trial? Should we abandon the jury or the Special Criminal Court? Or can we retain both in a coherent criminal justice system?

The Special Criminal Court’s role has never been straightforward. It was established as the IRA was setting off bombs in England, and Britain was on the verge of war. The German Reich was springing IRA operatives from Spanish jails and plotting to put them on U-boats to Ireland. The threat was real. And yet, throughout the Emergency (the second World War) the Special Criminal Court targeted black marketeers, not the IRA.

In 1972 Des O’Malley announced the re-establishment of the Special Criminal Court. He expressly linked the need for such a court to the Troubles in the North. Again the court was not exclusively concerned with paramilitaries. But it took the murder of journalist Veronica Guerin in 1996 to truly shift the court’s focus on to organised crime. More recently the Al Capone strategy – prosecuting suspected subversives for tax offences – was used in the case of Thomas “Slab” Murphy.

Much of continental Europe does not employ trial by jury. The father of sociology, Max Weber, considered juries to be irrational. I can sympathise with such a position. I would accept the abolition of jury trial in Ireland if the decision were reached after a process of considered deliberation. Protecting juries from intimidation is challenging. Protecting the accused from juror bias is, perhaps, even more difficult. But let’s not be too fast in ripping out the jury boxes.

Juries bring citizens in to the heart of the criminal justice system: not as defendants nor as mere observers but as active participants. We should think twice before abandoning that.

The most likely outcome of the current debate is that we do nothing.

Our commitment to juries has always been tempered by pragmatism. The vast majority of offences in Ireland are dealt with summarily, without a jury, in the District Courts (312,861 in 2014). The Circuit Court and Central Criminal Court dispensed with a 10th of that number. In the same year the Special Criminal Court resolved just 26 offences. So let things be.

The Special Criminal Court does not hear many cases but it hears important and contentious ones. Perhaps more importantly, its very existence requires us to accept that the ordinary courts are inadequate – or incompetent.

We have accepted that for more than 40 years. It is time to decide: do we want a jury system, a non-jury system or an inadequate system?