A concert at Brixton Academy in London pays tribute to the late David Bowie on the day the musician would have turned 70. Video: Reuters 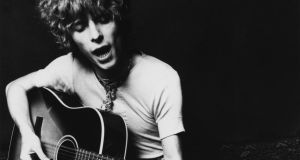 When I was six years old, my father sat me and my sister down to tell us the story of Major Tom. There was a man who got lost in space, he began, in a voice that told us that this was something important, that we should be quiet. We listened as he described the countdown and lift off, how the astronaut said the stars looked very different up there. When my Dad was finished, he went over to the record player and put on the song, and we followed the story again, this time through the voice and music of David Bowie.

“It’s so sad,” I remember saying, as the song began to fade. And I would examine the album sleeve, looking for clues to help explain this mystery. Then we would go off to bed, thinking of Major Tom floating around the universe, lost forever. I often wondered, back then, if it could have ended differently. Could he, perhaps, drift back to Earth some day? Or be discovered on some tropical island, his hair and beard all overgrown, his space suit rusted and covered in sand?

Space Oddity, which was Bowie’s first big hit, was released in 1969. It was inspired by Stanley Kubrick’s ground-breaking film 2001: A Space Odyssey, which Bowie described as “a revelation”. In a 2003 interview, he explained how the film “got the song flowing . . . though I was out of my gourd anyway, I was very stoned”. Space Oddity was played during the BBC coverage of the Apollo 11 launch, though it was also briefly banned for being too downbeat for the triumphant mission to the Moon.

I’m not sure when, exactly, I discovered that Space Oddity was not a true story. It could have been at a party

It was the mid-1980s, however, by the time my sister and I first heard the song. By that stage, Bowie was well into his Let’s Dance stardom and we’d often watch him performing on Top of the Pops. One of our babysitters went to see him play at Slane in 1987, though it was a bit disappointing, it turned out. She decided to send him a letter, which she dictated to me one evening as I sat at the kitchen table. Addressed to Mr David Bowie, it included a polite request to return to Ireland to play at her 21st birthday party.

Major Tom came in and out of Bowie’s songs over the years and returned, crucially, in his final album. Blackstar was released on January 8th, 2016. Two days later – and four years ago, this week – he died of liver cancer. Tony Visconti, his long-time producer, described the album, which was recorded in secret, as Bowie’s “parting gift”. Part of the video to Blackstar is set in space, where the body of an astronaut lies crumpled to the side. When a woman approaches and opens his helmet, she reveals a skull covered in jewels.

I’m not sure when, exactly, I discovered that Space Oddity was not a true story. It could have been at a party, when the song came on unexpectedly and I had a moment of clarity listening again. Maybe I even uttered the words – “it’s so sad, this story” – and in that instant the penny dropped, a friend gave me a quizzical look and I quickly changed the subject. My Dad never said anything about it being fictional, so it just sat in my memory, unquestioned, over the years. And we’d watched while the story was repeated to my brother, six years younger, like a rite of passage.

Major Tom, lost in space, was a brilliant allegory for the drug-taking of the 1960s. It captured a kind of loneliness and disconnect from society

The real meaning behind the song is, in many ways, much more chilling. “We know Major Tom’s a junkie, strung out in heaven’s high,” Bowie sang in Ashes to Ashes. The line of that song came into my head one night when I was walking home along the quays, and a man started staggering towards me. His hands were stretched out in front of him, like he was sleepwalking, so out of it he was unable to see me or the world around him.

Major Tom, lost in space, was a brilliant allegory for the drug-taking of the 1960s. It captured a kind of loneliness and disconnect from society, something that Bowie often spoke about, and resonates in this era of technological isolation.

And yet, when I hear Space Oddity now, it always brings back an innocence, a sense of wonder. The way you feel looking up into the vastness of a clear sky at night.