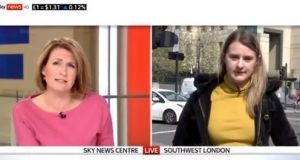 Sky News presenter Jayne Secker and young Londoner Kirsty Archer. ‘Offence had indeed been caused during the interview, but not by Archer.’

Rita Ann Higgins has a magnificent poem called Some People. It begins, “Some people know what it’s like,/to be called a c**t in front of their children/to be short for the rent/to be short for the light. . .” The poem goes on to list in Higgins’s bleakly hilarious style (“to be in space for the milkman . . . to be dead for the coalman”) the multiple humiliations that arise when you just don’t have enough money to live a decent life in a State that does not care.

Kirsty Archer is a young Londoner who knows what it’s like. She was asked to go on Sky News this week to talk about being evicted at short notice from her flat in the city. She sounded nervous, standing there in the street in front of the camera, but she had a story to tell and she was telling it.

She had just started to say that the problem was that she’d been evicted at short notice and it was really hard to find somewhere because flats were so expensive, when the presenter, Jayne Secker, sleek and at ease in studio, interrupted. “That’s not the landlord’s fault,” she said. “. . . that’s just the housing market.”

The presenter continued to speak over her guest, declaring herself to be someone who used used to rent but now “rents out” and delivering herself of a rant against “the younger generation”. Addressing the camera and thereby the nation, she declared that she’d had tenants who complained if a light popped because they couldn’t change a light bulb. Had Archer considered that maybe her friends weren’t equipped with all the skills required to rent a property?

The writer Phillip Pullman was among those who responded on Twitter. 'Absolutely disgusting,' he wrote. 'Privilege patronising poverty. The smirk of condescension is sickening'

Archer looked shocked. “That’s a bit patronising,” she said, with admirable restraint. If a landlord was getting “pissed off”– (we heard Secker’s pained “Oooh”) – with a tenant surely they could just talk to them.”

Archer said she was talking about working people. “Why should it be so hard for us to live secure lives? We can’t afford to buy a property, we have to rent.” Why should landlords be allowed to turn lives upside down?

But Secker was having no more of this. She abruptly ended the interview. “I should apologise for Kirsty’s language here for anyone who was offended,” she said.

Offence had indeed been caused. But not by Archer. The writer Phillip Pullman was among those who responded on Twitter. “Absolutely disgusting,” he wrote. “Privilege patronising poverty. The smirk of condescension is sickening.”

No intention of apologising

Archer herself said she had not been warned she was to be interviewed by a landlady. She had no intention of apologising for her language.

Secker then issued one of those apologies that don’t quite say sorry and end up making matters worse. She’d “got the tone and content of an interview wrong” she admitted, carefully. She was sure everyone had made mistakes. She ended with: “Mea culpa.”

A bit of digging revealed that in an interview earlier the same day, Secker had been condescending to the London musician Guvna B. When she asked him how communities could end knife crime, he gave an eloquent description of how being shown respect and encouragement by a teacher when he was a child at school had helped to change the trajectory of his life, and how everyone in the community needed to work together.

He said his mother was from Ghana and that she used to quote the Ghanaian saying, “it takes a village to raise a child”.

Secker interrupted him: “Yes, but we are not in a village in Ghana,” she said. His face registered anger and disgust but he managed to be polite as he told her she was being “quite stereotypical”. Later on he retaliated on social media. “Think the presenter got a bit confused,” he wrote, and went on to explain the proverb.

The good news is that the occasion of the interview with Archer was a victory for the “End Unfair Evictions Coalition” of which she is a member. For five years these campaigners have been fighting to stop so called “no fault” evictions, whereby UK landlords can simply give two months notice to a tenant without any reason.

Coalition members have formed human chains across the front doorways of houses to physically prevent evictions, they have registered thousands of new voters, and they have lobbied the government relentlessly. Finally, the law has been changed and the offending section abolished.

The bad news is that Secker is not alone. Also this week, on the BBC, Andrew Marr patronised and dismissed the courageous Labour MP David Lammy after he warned that extremist Brexiteers in the Conservative Party should be seen as a warning that fascism is on its way to the UK.

There is a serious lack of diversity among those with the top jobs in the media, and it is skewing the way we receive the news. Archer said it was time for more working class presenters.

On Monday night there was an exuberant homecoming event at the Lyric Theatre in Belfast for the wonderful Anna Burns. She is working class and has struggled – the acknowledgments in her marvellous novel Milkman include food banks and social services. She has spoken about being happy that winning the Booker for Milkman has made her “solvent”.

She talked at the Lyric about the part in the book when a French teacher tries to get a class of Belfast adults to look out the window at the sunset and describe its colours. They are stumped.

Burns talked about “how hard it is to change, to expand, if you’ve not been taught that it is possible.” Some people know what it’s like, and, as the Higgins poem concludes: “other people don’t.”