Without social welfare, almost half of the Irish population would live in poverty 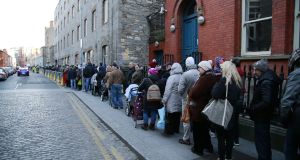 The Capuchin Centre in Dublin: thousands of parcels are given out to the homeless last December. Photograph: Nick Bradshaw

Ireland is doing very well. The economy is growing dramatically. There are more people employed and fewer unemployed. Ireland’s population is rising steadily. Challenging fiscal targets have been met and, in some cases, exceeded. Exports are booming and the cost of borrowing is low.

At the same time, Ireland also faces major challenges, the most significant being serious deficits in infrastructure and services, and the urgent need to address climate change mitigation on the scale required. These challenges are exacerbated by threats associated with Brexit.

Most Irish people want to see an end to homelessness, social housing shortages, hospital waiting lists and rural marginalisation. They want to see the lack of affordable childcare addressed, and investment in climate change mitigation and rural broadband. They also want to live in a society with far less poverty. These should be the priorities of Budget 2018.

Without the social welfare system, 46.3 per cent of the Irish population would have been living in poverty in 2015 (the last year for which statistics are available). In 2015 social welfare payments reduced the poverty rate by almost 30 percentage points to 16.9 per cent.

Based on Economic and Social Research Institute (ESRI) projections of an increase in average hourly earnings of 2.5 per cent, the Government should increase (non-pension) social welfare rates by a further €5 per week in Budget 2018 to keep pace, and aim to increase this rate again in 2019.

One of the least justifiable welfare policies pursued in recent years was the increase in the age of eligibility for full jobseeker payments to 26. While this is just one of many examples of how young people were disproportionately affected by austerity measures, it is one of the most obviously discriminatory, with little obvious benefit. Government should move to equalise jobseeker’s rates for under-26s with the rest of the population.

Budget 2018 should also increase the direct provision payment for adults from €21.60 to €39 per week and for children from €21.60 to €30 per week, and recognise the right to work of all asylum seekers whose application for asylum is at least six months old.

Older people living alone have a high rate of poverty and deprivation. In order to address this, the Government should increase the living alone allowance by €5 in Budget 2018. Fuel allowance rates should also be increased by €6.50 in Budget 2018 to restore purchasing power parity to 2010 levels.

If people have a disability, they incur additional costs. Ireland should now introduce a cost of disability payment.

The State pension is, by some distance, the greatest poverty reliever among older people in Ireland. Yet access to a payment is closely linked with labour market participation, with individuals qualifying for payment based on their PRSI contribution history.

This results in incomplete coverage and anomalies where many individuals with irregular work histories are penalised and do not receive the full amount.

Changes made to the eligibility criteria in 2012 have created additional anomalies where many new recipients, a disproportionate number of whom are women, receive further-reduced benefits due to their having postponed their retirement, or having taken extended leave from the workplace to care for their families.

The objective of a pension system is to provide citizens and residents with an income that removes them from risk of poverty in old age. Yet the Irish pension system is characterised by incomplete coverage and a generous system of tax reliefs that disproportionately benefits the better-off in society. (More than 70 per cent of pension tax reliefs accrue to individuals in the top-income quintile.)

Ireland should move to a single-rate universal State pension payment of €238.30. We will soon publish a report outlining how Ireland can move to such a system in 2018, using money that is mostly already in the pension system.

Budget choices are critical to developing a fair and just society. Earlier this week, Social Justice Ireland published a fully costed set of budget proposals together with details of how all of these proposals can be financed within the fiscal parameters Government has set for the budget.

1 One hundred Irish retailers for all your online Christmas shopping
2 Covid-19: Backlog forces HSE to skip calls to thousands of close contacts
3 School ordered to reopen after closing due to Covid-19 fears
4 'It’s his dishonesty, lack of character, his deceit' - ex-CIA chief excoriates Trump
5 Michael McDowell: What exactly the price of accepting this Nphet advice?
Real news has value SUBSCRIBE