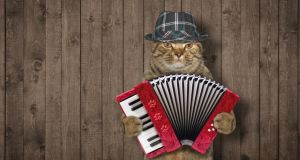 Here’s a question that never featured in Myles na gCopaleen’s Catechism of Cliché, or at least not that I recall. With what feline wind instrument can any dire thing in Ireland be compared? Yes, well done, you at the back there.

The answer is “cat melodeon”, a phrase that crossed my mind the other night for the first time in years.

In fairness, maybe it never quite attained the status of cliché. And maybe also, although it sounds as if it has been around forever, it came too late for Myles.

Some dictionaries date it in print only to the 1980s, an opinion with which this newspaper’s archive agrees. The oldest mention I can find is from 1986, in a report on the homecoming of a group of Irish seamen who had been stranded in Marseilles for months after Irish Shipping went into liquidation.

Drinking Guinness in Dublin again, one of them recalled that the Marseilles pubs had been “manky” and the beer there “cat’s melodeon”. This was duly seconded, in abbreviated form, by one of his companions: “Peter’s right, the [French] beer’s cat.”

In that abbreviation – “cat” – you have something even more fundamental to Hiberno-English.

Other animals may be invoked to describe bad situations, but usually as part of longer phrases: dog’s dinner, horse’s arse, etc.

Only “cat” serves as a one-word adjective for all things terrible.

Whether this has anything to do with the actual animal is unclear. It might equally have started out as shorthand for “catastrophic”. But humanity has a long history of humans blaming cats for misfortune, so if it did, the coincidence must have seemed apt.

As language blogger Stan Carey has pointed out, there is a particular Irish tradition in this regard, thanks to the cat mara (“sea cat”) or cat marbh (“dead cat”) on which people here used to blame bad luck.

The sea-cat is a character in Myles’s comic novel An Béal Bocht.

It foreshadows the many ills that will befall the protagonist, when on the stormy night of his birth, two elders witness another ominous spectacle – “ducks [..] in the nettles”.

This, they know, means that “the evil thing and sea-cat will be a-foot in the darkness and [...]no good destiny is ever in store for either of us again”.

Later in the book, while hunting in west Donegal, the hero has a terrifying encounter with the cat, although his descriptions of it afterwards are so confused as to suggest the influence of poitín.

He can’t say, for example, whether the sound of its arrival on land was hard, “like one stone falling upon the other”, or soft, like a “fat cow falling into a water-filled bog-hole”. It seemed to his ears both, and dreadful.

The idea of discordant noises must be central to “cat melodeon” too. And if some purists of Irish traditional music are to be believed, piano-accordions are heavily implicated. These have long been controversial in trad circles because they can be very loud, and often – so their reputation has it – badly played.

That’s where the Belfast poet and musician Ciarán Carson suggests the term originated. As paraphrased in an Irish Times review of one of his books, he attributed “cat melodeon” to the alleged tendency of “piano-accordion players (who often refer to their instruments as melodeons) to play two notes at once”.

Anyway, what reminded me of the phrase this week was a cat of an entirely different kind: Schrödinger’s.

As part of an RTÉ programme for the forthcoming Science Week, I had just been recording a piece about the great Austrian physicist’s time in Ireland during the 1940s and 1950s.

This featured mention of his famous thought experiment, in which a cat in a sealed box with a flask of poison is potentially both alive and dead, depending on the behaviour of sub-atomic particles, until the box is opened by an observer, at which point the cat assumes one state or the other.

It is of course pure coincidence that, in traditional music, accordions and concertinas are all collectively known as “boxes”. These boxes too contains cats, at least potentially. Depending on the skill of the box player, the cats may be dead or alive, or both.

But on the way home the other night, I had a thought experiment involving a session of especially sensitive musicians in Clare.

Their ears are being tortured by an accordionist so bad, nobody can tell whether he’s playing major or minor. Patience is soon exhausted, and the question is settled, finally, when an observer opens the box with a hammer.

1 Pandemic relocation: The couple who abandoned Dublin for home in Co Mayo