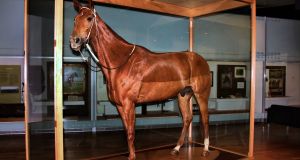 It seems I owe New Zealand an apology for suggesting here last week (An Irishman’s Diary, October 31st) that the great 1920s racehorse Phar Lap was “Australian”. In this, I was taking my cue from his 1932 obituary in the Sydney Morning Herald, which called him “Australia’s wonder horse”.

But that was cultural misappropriation, as Dr Rory Sweetman from Lake Hawea, Otago, has pointed out.

“Dear editor,” he writes. “Loath as I am to correct Frank McNally, Phar Lap (1926-1932) is a Kiwi and not an Aussie horse. Although he never raced there, he was born and bred in New Zealand. His skeleton is currently on display in the Museum of New Zealand, Wellington.”

Fair enough, up to a point. The horse’s skeleton is indeed in Wellington. Mind you, his mounted hide is in Melbourne, where he had his most famous victories. And his heart is in Australia too.

That’s not just a metaphor: twice the normal size, it was a scientific wonder, and is displayed at the National Museum in Canberra.

I’m sure New Zealanders get at least as annoyed as we in Ireland do when their successes are claimed by the larger neighbour across the water.

But part of the confusion about Phar Lap may arise from a convention in horse-racing whereby the animal acquires the nationality of its trainer.

A famous example in these parts was the rivalry in jumps racing half a century ago between Arkle and Mill House. Mill House was the pride of England after winning the 1963 Cheltenham Gold cup. So when Arkle, trained in Meath on a diet supposedly including Guinness, proceeded to trounce him in subsequent runnings of the race, it was like a four-legged revenge for Skibbereen.

And yet Mill Reef had been bred and foaled in Ireland too. Were he able to speak, even after emigrating to Berkshire to be trained by an ex-British army officer, it would have been with the flat accent of his native Kildare.

In recent years, the British-Irish rivalry at Cheltenham has been hyped into an actual competition: the country with most winners (Ireland this year, by 17-11) now awarded a cup. This would have been unthinkable in former decades, when even a single Irish victory was not guaranteed. But back then, many – often most – of the British winners had been bred here.

By contrast, consider the fate of Corkman Jonjo O’Neill, who as a jockey partnered Dawn Run in one of the immortal Irish sporting successes, the 1985 Gold Cup. He’s a trainer now, and many times has saddled Irish-bred horses, for Irish owners (typically JP McManus), with Irish jockeys on their backs. Even so, by the logic of horse-racing, those are all now English wins, because O’Neill is based there.

No doubt it doesn’t matter to the horses. They may be members of a nation all their own, as Jonathan Swift suggested in Gulliver’s Travels, where the hero finds enlightened government only in the land of the Houyhnhnms, a race of talking thoroughbreds who rule over deformed humanoids called Yahoos.

Anyway, leaving Phar Lap aside for now, but staying with horses, I was interested to read this week about the death in England, aged 83, of a former show-jumping great called David Barker.

A straight-talking Yorkshireman – is there any other kind? – he was named posthumously in the Spectator magazine as the hero of a story, previously disguised, in which Prince Charles was once given a dressing down for inadequate horsemanship.

It happened at a hunt, in the days before they were banned in England, when the prince’s horse refused a fence. Barker blamed the jockey, not the animal, and ordered the royal personage out of the saddle before getting on himself and persuading the animal over. This was accompanied by a lecture: “You’re the heir to the throne. If you sit on the throne like you sit on that horse, you’ll not stay there long.”

Alas the Spectator does not tell us the horse’s nationality, leaving us to speculate idly whether it had Irish republican tendencies. It does however mention another famous mount of Barker’s, Mister Softee, a multiple champion of the 1960s, whose triumphs included clearing a 7ft 2in wall in a “puissance” event at Madison Square Gardens.

Mister Softee would have spoken with a Clare accent: he was bred in Kilrush. But according to David Broome, who also won many victories on him, the horse had monarchist leanings.

Commenting on the tendency of such gifted animals to be a bit full of themselves, Broome once confirmed: “He thinks he’s a king. And he’s right”.

2 Mary Robinson’s former home in the heart of Ranelagh for €4.5m