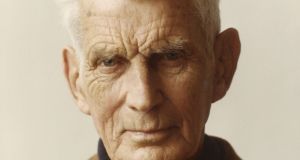 When writing to the Irish author and playwright, Mary Manning Howe Adams, Samuel Beckett says, “No question of your ever losing my friendship. I think of you often and with all my heart wish for you better days”. Photograph: Ullstein Bild/Getty

Samuel Beckett was not known to show affection easily. However, reading through some of his private letters, a picture of a thoughtful and generous person emerges. He was an avid letter-writer, regularly replying to all sorts of correspondence from friends and family, admirers or those looking for his help.

In one letter from April 1974, Beckett wrote, “I am opposed to the publication of private letters”. He was replying to an Italian translator who had inquired about reproducing letters between Beckett and an Italian artist who had done engravings based on some of Beckett’s work.

He seems to have relented, however, and four volumes of his letters have since been published. He stipulated that they should not be released until after his death. The letters offer an unparalleled insight into the inner thoughts and personal life of an intensely private individual. He felt his own life was not important and that it did not warrant examination. “My life was devoid of interest, to put it mildly, and much better left unwritten”, he wrote in a letter to the New York Times theatre critic, Mel Gussow, in April 1973.

I read with distress of your difficulties. May I help you financially?

When he learned that a friend was going through a bad patch, in terms of health or financial matters, he was moved by their suffering. His replies show a genuine caring side to his nature that was seldom on display in his plays or other work. He expresses his solidarity with them and offers to help in any way he can.

For instance, when he read in a newspaper that the American artist, Djuna Barnes, was having some trouble, he wrote, “I read with distress of your difficulties. May I help you financially?”. He told Barnes that he was owed money by an American bibliophile and that the funds in question (between $3,000 and $4,000) “are yours with a heart and a half if you will say the word”.

He comes across as a faithful companion who would stick by his friends in their hour of need. He expresses his emotions freely and tells friends exactly what they mean to him.

When writing to the Irish author and playwright, Mary Manning Howe Adams, he says, “no question of your ever losing my friendship. I think of you often and with all my heart wish for you better days”. She was having some difficulty at the time and had planned to sell some correspondence between herself and Beckett and was obviously afraid that it would endanger their friendship.

He helped relatives financially, sending money to his aunt, Peggy Beckett. Her husband, Beckett’s uncle James (Jim), died in 1971 and he offered to send her cheques twice yearly. He was concerned when there was a bank strike in Ireland in 1976 that she might not be able to cash the cheque that he was sending her in the post from Paris. He also offered to pay for a television set to be installed for her and said that it would give him much pleasure if she would agree to it.

Beckett’s letters also reveal that he was willing to use his reputation to help friends who were applying for jobs, scholarships or fellowships

Many, though not all of his letters, are peppered with humour and affection. A typical sign-off to close family and friends would include one of the following endings: “affectionately”, “big hug”, “love”, “fond love”, and even “much love”.

One letter to Lucia Joyce, daughter of his friend, James Joyce, shows how Beckett paid for a magazine subscription for her. In June 1961, he wrote saying that the publication frequency of the Illustrated London News was changing to a monthly and that he hoped that it would continue to give her pleasure. At the time, she was living in a hospital in Northampton, England where she would spend the last 30 years of her life.

Beckett’s letters also reveal that he was willing to use his reputation to help friends who were applying for jobs, scholarships or fellowships. Sometimes, he seems to have done it off his own bat and does not seem to have been asked to do it by his friends. He was a generous spirit and this is mirrored in letters, which show his willingness to contribute to memorial funds for friends or for other causes such as Amnesty International or for Polish intellectuals in need in July 1982.

In later years, the tone of his letters becomes dark and sentences are often reduced to just a few words. Writing in November 1983, he writes, “Nothing of interest to tell. Writing at an end. Tired of it all”. He finishes the letter by revealing that his father had wished he had taken a very different career path, saying “why didn’t I go into Guinness’s as father wished?”. The world of literature would be a poorer place if he had taken his father’s advice.