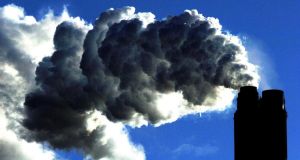 ‘Humans are notoriously bad at estimating future risk. This kind of thinking is fatal when it comes to climate change.’ Photograph: John Giles/PA Wire

Imagine a fire station. The fire alarm begins to blare, but the response from the firefighters is to put on the kettle. After a nice cup of tea, they begin slowly gathering up their equipment, assuring each other that there is no need to rush because maybe this is not a real fire.

That is exactly the way the current government is acting in relation to climate change. When challenged on a radio programme as to why he did not deliver on a carbon tax, Paschal Donohoe said he prioritised the challenge of Brexit.

The consequences of Brexit are serious, but compared with climate change, they are in the ha’penny place. And hiding behind the claim that a carbon tax would affect the poor and rural areas disproportionately ignores that there are credible ways of mitigating this effect. But they take imagination.

We can excoriate the politicians’ lack of foresight, but it is we, the electorate, who reward them for not looking any further than the next election.

Humans are notoriously bad at estimating future risk. Our brains are not wired that way. There is always the possibility that threats will not come to pass, like Y2K or avian flu.

Except this kind of thinking is fatal when it comes to climate change. The fire alarms have been going off for some time, with the loudest one happening right before the budget, with another Intergovernmental Panel on Climate Change (IPCC) report telling us in terrifying detail the consequences of failing to act.

The result? People have metaphorically started to snip the wires to the fire alarm because it is just so darn intrusive.

It does not help that the world’s biggest climate change denier lives at 1600 Pennsylvania Avenue NW in Washington DC.

In 2012 Donald Trump tweeted: “The concept of global warming was created by and for the Chinese in order to make US manufacturing non-competitive.”

But Trump is only an extreme manifestation of a cultural phenomenon that might be called the flight from evidence. And it is found on both the left and right of the political spectrum.

Daniel Kahneman, the psychologist who won a Nobel Prize for economic sciences, is famous for his work on the psychology of judgment and decision-making. In his book Thinking, Fast and Slow, Kahneman shows that we are far less influenced by reason than we think and instead are constantly reacting according to various cognitive biases.

One of them is assimilation bias, the tendency to bend new information to fit pre-conceived ideas, rather than changing our ideas to fit the evidence.

Sadly, the brighter you are, the less likely you are to change your mind on the basis of evidence. Your intelligence will make you better at spotting holes in arguments.

This bias seems to be hard-wired into our brains, but in age of identity politics, the impact is far more serious. People have always believed that things are true based on who is saying them and whether they like or identify with that person, but nowadays doing so has achieved the status of a valid choice.

So, for example, people who believe climate change is caused by humans will treat anyone who challenges any particular finding or solution as a heretic, fit only for burning, even if the alleged heretic broadly accepts the reality of climate change.

This in turn reinforces the climate change deniers’ belief that environmentalists are extremists or zealots.

There is also a profound streak of anti-intellectualism, where to claim to be an expert is seen as an assertion of privilege and elitism, something unthinkable in an age where equality is probably one of the top five most important values.

As Isaac Asimov put it in 1980, this emphasis on equality has led to “the false notion that democracy means that my ignorance is just as good as your knowledge”. Social media has magnified the effect of that belief to a previously unthinkable level.

In addition, most of our modern values make it very difficult to voluntarily do anything collectively that demands sacrifice. Autonomy and individual choice, the most important values in western society, are often in direct conflict with the notion of a common good.

Kahneman is profoundly pessimistic about the possibility of changing people’s minds about climate change.

George Marshall’s 2014 book on climate change, Don’t Even Think about It, offers more hope. He believes people unite around narratives, a kind of heroic quest that appeals to our deepest values.

Although I do not think Marshall is religious, he believes we need to evoke “the non-negotiable sacred values that would enable people to make short-term sacrifices for the long-term collective good – for example, values that prohibit destroying a precious cultural asset, inflicting harm on the weak or innocent, abusing God’s creation and being cruel to our parents and children”. This is the approach exemplified by Pope Francis in his document Laudato Si.

But to see that in action in Ireland, we need political and cultural leaders who are willing to tell us that there is a real fire and we need to act together now, not next year, to put it out.