River of Time – Paul Clements on the Shannon 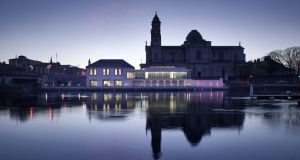 View of the Shannon from Athlone. Photograph: Ros Kavanagh/Getty Images

‘I wasted time, and now doth time waste me”, King Richard hauntingly declares in his soliloquy in Richard II. Seen through the prism of a flowing river, rather than a Shakespearean king, time has an elastic quality.

While the 21st-century face of Ireland has changed beyond all recognition, the river Shannon remains slow and ponderous, sliding sinuously in the same way as it has always done. It can be relaxed and languorous, but at other times tempestuously alive, unpredictable and prone to running rampant through fields.

For more than two centuries there has been serious flooding. Some of the most devastating periods in recent years have been November 2009 and the winter of 2015/16.

Major storms and rainfall in February this year caused severe hardship in homes and businesses, swallowing up gardens and driveways in many counties.

In the mid-1950s, an American army engineer was brought in by the Irish government to help solve the periodic flooding problem. Col Louis Rydell, of the US Army Corps of Engineers, had tamed the Mississippi down to New Orleans and was an expert on flood control.

He spent considerable time working out the channels to be dredged in the Shannon and its tributaries, suggesting an “aggressive approach”.

He conceded that the difficulties were immense and eventually ran out of time, moving on to tackle the Indus river in Asia. But Col Rydell emphasised the navigation, fisheries, recreation and wildlife potential of the Shannon, which he considered to be “one of the world’s great rivers”.

The tyranny of time is a fact of life and a river provokes themes of time. One school of thought says that until you have “wasted time” in a place you cannot pretend to know it, although you may come to know it in the fullness of time. Along stretches of the Shannon, time is measured in the sight of darting kingfishers, an elusive bird and a supermodel of the avian world.

There is a mysterious allure about the Crank road near Banagher, which locals say is “lost in time”.

People often talk about demands on their time through idiomatic expressions. They “buy” time, as though it were something you could purchase. They “spend” time, “invest” time or “put time aside”, they “find” time for “quality time”, “save” time and sometimes are “time-poor”. But what they never do to is “waste” time because time is money. Yet in France, more than 30 villages are called Perte-de-temps (“Waste-of-time”), although most are now deserted.

In the 1970s, Raymond Gardner went on a riparian journey along the Shannon and other Irish waterways for his book Land of Time Enough. For him this was the catchphrase of travellers to an area where time is insignificant, translating as “Sure, there’s no hurry”. This approach is also summed up in a quotation from the elegist of the midlands John Broderick who said of Athlone people: “By our shrugs shall you know us.”

Frequently, Broderick looked back on 1930s Athlone where he grew up, and in his essay, Redeeming the Time (1980), he painted a pastoral portrait: “It seems to me everyone spoke softly in my childhood, and amused themselves in a very tranquil manner, they did not raise their voices while walking sedately along the canal banks, or taking tea in the yacht club, or sitting in their windows watching the neighbours go by, an occupation that never seemed to tire them.”

The Shannon is largely the same river that the writer Richard Hayward admired in his travel book Where the River Shannon Flows published in 1940. That summer the book was reviewed by Maurice Walsh in The Irish Times and was top of the paper’s non-fiction list under a section called “What Dublin is Reading”.

When Hayward met a lockkeeper he realised that the river defied time: “There’s a dreadful amount of meaningless hurry in the world, and with the growth of the Machine Age it is rapidly getting the better of us. To think more and hurry less was clearly the philosophy of this old Shannon lockkeeper, and the more I ponder it the more I like it.”

Since those days, the enduring spirit of the Shannon still epitomises a sense of timelessness, while the light on the water is the long light of time itself.

The bridge in Lanesborough, separating the town from Ballyleague, is a magical place to watch the river of life float by. Halfway across, two plaques declare the boundary of Longford and Roscommon and mark the division of Leinster and Connaught.

Catch the right day and along main street in Lanesborough, you may hear the warning beep, beep, beep of a reversing truck signifying bin collection day. With its flashing orange lights, Mulleady’s recycling lorry is emblazoned with a simple motto: “All our time goes to waste.”

Paul Clements is the author of Shannon Country: A River Journey Through Time (The Lilliput Press)

1 The Sack of Balbriggan: The burning of a town that shocked the world 100 years ago
2 Coronavirus: Germany and Iceland look set to be taken off ‘green list’
3 Chris Johns: We’re in for a triple whammy of Covid, Brexit and the US elections
4 Mike Murphy: ‘I won’t do another over-70s lockdown’
5 The five lies we told ourselves about coronavirus
Real news has value SUBSCRIBE