Rite & Reason: Stewardship of planet must begin with better conversations 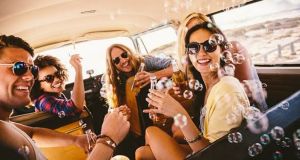 “Humanity’s propensity for selfish hedonism is steadily reducing this planet to an environment unsustainable for life of any kind.” File photograph: Getty Images

It is a truism that we are living in a culture of adversarial anger. We most readily discover our identity not by establishing what we are, but in finding and vilifying those who are against us.

A cursory engagement with social media will horrify most of us. It reveals a pervasive if anonymised defensive rage. It is an inchoate anger that can also present itself – even more dangerously – in the casual savage violence visible throughout our island.

And it may, indeed, also be a component (albeit clearly not the only element) in the rise in suicidal ideation that threatens so many young lives.

In an apparent corollary, civic discourse (and not merely within political life) is likewise being steadily degraded as a stark binary pose on all issues becomes the predominant public mindset – no reasoned discussion, simply some new scheme presented with a minimum of nuance and a surfeit of self-righteous assertiveness.

The routes of reasoned persuasion have been replaced by the hasty production of battle-lines. In the midst of this is it not sensible to suggest that more wholesome conversations are needed in our public discourse? In particular, we surely need to consider together not simply the latest momentary squabble but far deeper matters.

Perhaps the most pressing of these is how we human creatures are to face into the future beyond our own individual and immediate tastes and requirements.

What is it to be a responsible human person in a world spiralling out of control? These are serious conversations that those of religious faith and those of humanist conviction should be able to hold, and with a mutual respect and common purpose.

It is true that there are clear alternative perspectives between the religious believer and the humanist on what we are as human persons – whether we have been created by a purposeful God or by an astonishing but wonderful series of arbitrary occurrences.

But there is surely a true congruence between us both on the innate dignity of every human person, and on the obligations imposed on us – obligations that we might both even describe as a sacred trust – for the future of this remarkable planet for which we must all take responsibility.

We may construe the words differently, but we would surely find common cause in the sentiments of Vatican II’s Pastoral Constitution on the Modern World, Gaudium et Spes (31), “One is entitled to think that the future of humanity is in the hands of those who are capable of providing the generations to come with reasons for life and optimism.”

Such will be the incremental advances in both robotic and computer technology that it is estimated that by the year 2040 at least 50 per cent of jobs undertaken at present by people in every sector of the workplace in the developed world will be done, and more efficiently, by machines.

As more and more people become unneeded in the workplace society will contain an ever-larger proportion of people who are, in material terms, use-less, and consequently without power or influence.

Will this result in healthy and wholesome leisure opportunities for the many, or will it mean – as current trends certainly suggest it will – that a tiny minority will become even more obscenely wealthy and a huge majority will scrabble for income of any kind?

We are not over-generous at present to those who, both close at hand and in other parts of the world, are at the harshest edges of survival. Will we show any more humanity when under-employment becomes a pandemic throughout this country?

We might add a more philosophical question as to what being human will come to mean as artificial intelligence makes ever-greater advances, transcending human capabilities in more and more areas of daily life, and moving deeper and deeper into the spheres of bioengineering.

These are not fanciful speculations from some futuristic horror film but a clear trajectory apparent before our eyes if we had any interest in looking beyond the fleeting present. We might say the same about the future of the earth itself.

Humanity’s propensity for selfish hedonism is steadily reducing this planet to an environment unsustainable for life of any kind. Because this pillage may not affect many of us here in Ireland during our lifetimes does not absolve us from accountability.

And nor are these merely political matters, to be solved by well-intentioned politicians with inspiring sound-bite here and an instant cost-free stratagem there. These are existential issues that affect us all, religious believer and humanist alike.

There are no cheap or easy answers, but the directions in which we seek to take our common stewardship of this planet must begin with better conversations that are mutually respectful and supportive. Our children and their children deserve more from us than strident antipathy shrouding self-indulgent lethargy.

4 Netflix: 10 of the best new shows and films to watch in March