There should be political representation on the proposed new oversight commission 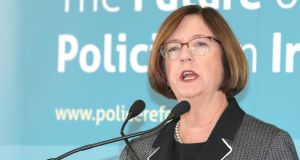 It is good but it is not right. The catchphrase from the eponymous television show might be the best summation of the Commission on the Future of Policing in Ireland’s report.

It is an in-depth piece of work and those of us who take the time to read it should keep an open mind and not be overly influenced by our prejudice or modular preferences. Age and experience informs us all of the reality that organisations are as subject to the quality of the people who populate them as they are to the ingenuity of their operational mechanisms. I have had time to read the executive summary and a fair portion of the full report. My initial reaction is that it is good but it is not right.

It is good on human rights as the foundation of policing. It puts it up front and centre, not in some vague and aspirational way but embedding it into the thinking, ethos and operation of policing.

The hard-headed members of the public who would view human rights as fluffy will be more than content that there is also a strong thrust in the report to get more police out on to the streets. “To each his own” informs this section of the report. The police should do what the police should do and make others do what they have to do. The criminal justice system and the prisons have become far too reliant and demanding of the police, claims the report. Gardaí would be better employed out in the community rather than doing the work of solicitors or prison officers. There will be a lot of support for those recommendations in local communities.

There was speculation that a national security agency, akin to MI5 and separate from the Garda, might be contained among the recommendations. That is not the case. It looks as if national security will remain much as it is with an added analysis centre headed by a co-ordinator and reporting to the Taoiseach rather than to the Minister of Justice. There are strong indications that the authors thought the Department of Justice was too involved and overly powerful in the management of policing. One of the roles of this new analysis centre and of its boss will be to co-ordinate information and co-operation between a lot of State agencies and Government ministries.

A much bigger change is the call for a completely independent ombudsman office that deals with complaints against the gardaí. This would remove the police service from having any role in investigating complaints against its own members. This makes complete sense and is established practice in most developed countries nowadays.

There is quite a lot in this report about co-ordination. In my opinion, far too much. Multi-agency co-operation, partnership, inter-departmental planning and joint action plans are often a recipe for poor management. In reading the report there is an impression that such language is sometimes a disguise for a lack of concrete and specific suggestions. There is, rightly, an emphasis on local policing committees and community safety to the point that there should be a new law enacted and the new Policing and Community Safety Oversight Commission (PCSOC) – which would supersede the Garda Síochána Inspectorate and the Policing Authority – should devote much of its time to the issue and to these committees.

However, anyone who has experience of such committees knows how difficult it is to get the balance between consultation and governance. Are they there to act as a comfort blanket to the local police? Have they any authority or influence beyond drawing up yearly plans that will go elsewhere for approval or rejection?

The one excellent suggestion that stood out is the co-location of social services and police to deal with the most difficult cases of mental health, addiction, child protection and domestic violence that occur mostly at night and weekends. More of those type of suggestions and a clearer vision of local and district involvement in governance would have been helpful.

There are 105 pages in the report and much, probably most, of it is good. It is on governance that I think it is not right. Ironically, there is a short paragraph that dismisses the argument for elected political representation on the old Policing Authority and now on the new PCSOC.

It argues that such political representation has received mixed reviews from elsewhere: “we see no compelling reason why it would be a good or necessary solution for Ireland”.

I have argued that such elected political representation elevates any authority beyond a quango. Whatever about that, I am more surprised at the recommendation that the PCSOC should have no decision-making role in matters of internal governance of the police, such as appointments, promotion and budgetary matters.

These powerful and defining roles are to be taken away from the old Policing Authority and given to a new Policing Board made up of the great and the good of finance, business, the professions and labour relations. Why?

There is much explanation but no convincing argument. Why split community safety and roll it in with an inspectorate? Instead of simplifying oversight and governance structures, these proposals will surely complicate and obscure.

I should admit that I was never in favour of this commission. I thought it unnecessary and a passing to others of political responsibility. I thought the Policing Authority should have been given more authority coupled with elected political representation, and the finance and manpower to drive the necessary reform. My fear is that the report might get bogged down in more political argument and further delay the reforms that are needed.

Denis Bradley is a journalist and former vice-chairman of the police board for the Police Service of Northern Ireland.

1 In six months we will be in the grip of a 1980s-style recession
2 Coronavirus: A further three deaths and 47 new cases reported in the State
3 Luke ‘Ming’ Flanagan bares his bottom half to European Parliament
4 ‘I saw young girls get kicked, hit, sprayed and dragged off gasping for air’
5 Black Lives Matter protest planned for Dublin is cancelled
Real news has value SUBSCRIBE