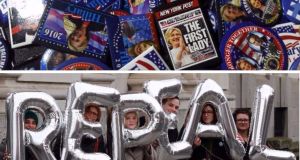 Campaigns with contempt: “If they ever get their referendum, their contempt may lead to the same type of shock result liberals have just experienced here in the US.”

Sitting at my computer, here in Los Angeles, I want to tell you about a very contentious and divisive political campaign. One side seems to have everyone on their side – establishment politicians from all parties, the radical left and every actor you have ever heard of and many you haven’t.

Almost all the major newspapers are on board – including the women, fashion and lifestyle magazines that don’t normally take political stances.

It’s a movement that has the support every celebrity, writer, poet and thinker.

On the other side, there appears to be a few relics from a long time ago. According to these journalists, poets and thinkers, their opponents are a bunch of religion-obsessed, misogynistic neanderthals who, according to one actor, just want to keep women in chains.

Basically, everyone who is against them is labelled hateful, uncaring and much more besides.

The vitriol and contempt from the Repeal side towards their opponents is a sight to behold and, if it continues, and they ever get their referendum, it may lead to the same type of shock result liberals have just experienced here in the US.

If you only read the quality newspapers, listen to RTÉ and follow the cultural “elites” and their hangers-on in Ireland, then it is clear what side all “right-thinking people” are supposed to come down on.

Just as it was in the recent US election.

The message is very clear that if you don’t support the Repeal the Eighth campaign, you are, as Hillary Clinton would say, an “irredeemable deplorable.”

Just have a quick glance at the terms used by Repeal the Eighth supporters. According to Repealers, their opponents cannot be motivated by a sincere belief that babies in the womb are humans and deserve to be protected from killing.

No, Repealers know that even though much of the leadership of the anti-abortion movement is female – they are just motivated by their hatred of women.

Similarly, those who want to protect children with Down syndrome or girls from selective abortions are throwbacks to a time when all decent Irish people should be ashamed.

According to a prominent Repealer – who is also a doctor – abortion survivors, a group of people who survived their own abortion, should not be listened to because they are “Jesus freaks” and “Bible thumpers”. Thanking God for a remarkable survival story is now no longer allowed in official Ireland.

And just like the Clinton campaign, Hollywood has piled in.

Actor Liam Neeson has recorded a video lecturing Irish people that their reluctance to allow abortion is part of a “a different time we’d hoped we’d left behind.” The abortion ban has us “chained to the past,” he states.

Clinton represents the future – everyone from Lena Dunham to George Clooney to the New York Times and Cosmopolitan magazine told us so. And Trump represents a shameful past that no one would want to return to.

Well, we saw how those student union labels worked out.

The Repeal the Eighth campaign is heading in that direction with their celebrity endorsements and disdain for the very real concerns of those opposed to abortion.

Repealers have been slow to address real concerns from real people who want to be convinced on an issue.

What are the time limits they would want after a successful abortion referendum? Will it be 12 weeks or 24 weeks like it is across large parts of America? Or will it be nine months as it is in five states in the US? And, if not, why is nine months unacceptable but six months okay? Will sex selection be allowed? And, if not, how will they stop it – if it is a woman’s right to choose?

And what about “Comfort Care” – an established abortion practice where babies who are still alive after the procedure are set aside with a blanket until eventually they die from neglect. Will this be part of Ireland’s abortion regime?

After they have finished insulting those who disagree with them, perhaps Ireland’s actors, poets and thinkers might like to address these questions.

But they probably won’t. It seems that, just like American liberals, Irish abortion campaigners are in a metropolitan bubble where maybe people do believe you should be allowed to have an abortion up to nine months.

I doubt any significant portion of the Irish electorate agree and the attacks and insults certainly won’t convince them otherwise.

So, the Repeal the Eighth movement has a choice.

They could try and convince Irish citizens from outside their bubble about the validity of their position. If they don’t, just like US liberals, they will wake up after the referendum whining. And, this being Ireland, they will write interminable think pieces that usually start with a clichéd Yeats quote.

Phelim McAleer is an Irish filmmaker and journalist based in Los Angeles. His book Gosnell: America’s Biggest Serial Killer about Philadelphia abortion doctor Kermit Gosnell is due out in January. It is published by Regnery, gosnellbook.com. Along with his wife Ann McElhinney, he is co-producer of the Gosnell Movie, gosnellmovie.com .