Questioning the state of Israel is not anti-Semitic

UCC academic conference on Israel is about decolonisation, not demonisation 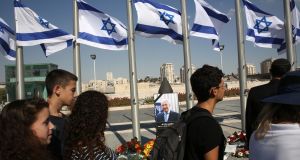 Israelis pay their respects to former president Shimon Peres in Jerusalem last year: A UCC conference is to debate a diverse selection of ideas in relation to Israel and international law. Photograph: Menahem Kahana/AFP/Getty

To criticise the state of Israel is to demonise Jewish people. This has been the default charge levelled by an Israeli government seeking to undermine dissenting voices – from international diplomats who oppose settlement expansion to its own soldiers who speak in Israeli schools about the army’s treatment of Palestinians.

A series of Al-Jazeera investigative documentaries last week exposed the extent of recent Israeli government interference in British politics. This included the deliberate manufacture of false anti-Semitism accusations against advocates of Palestinian rights. The fallout has involved an Israeli government apology and the resignation of one of its diplomats.

Similar tactics are now also being deployed in relation to a conference organised in UCC on International Law and the State of Israel: Legitimacy, Exceptionalism, Responsibility. The Israeli embassy in Ireland has suggested that the purpose of such academic discussions is to “propagate hatred”. This is a transparent attempt at deflection. The conference speakers are established scholars from across Europe, the Middle East, Asia, Australia and the United States, committed to critical thinking and the promotion of anti-racism.

Many of them are Jewish: Israeli and otherwise. They will debate a diverse selection of historical, juridical, philosophical, sociological and anthropological ideas in relation to Israel and international law. Some will present papers supportive of Israeli government policy and even Jewish-Israeli settlement rights in occupied Palestinian territory. Many will be critical of particular state practices or constitutional arrangements. They are motivated not by hatred, but by intellectual engagement and social conceptions of justice.

The conference will explore theories of legitimacy, violence, citizenship and responsibility – the responsibility of western powers for historic and contemporary injustices in the Palestinian territories, of Israel and Arab states, of international law itself. It will also think through the notion of exceptionalism. Is there something exceptional about Israel that absolves it of certain state responsibilities or, alternatively, that burdens it with additional responsibilities? Or is it in fact unexceptional – a typical liberal democracy, or a typical settler colonial state?

It is crucial that no political interference be allowed to stifle academic inquiry into such questions. In expressing his support of the Cork conference, film-maker Ken Loach reminds us that “history does not belong to any one group, state or political project. It belongs to us all. History must be constantly re-examined and analysed; accepted versions should be challenged and accepted interpretations interrogated.”

We have, of course, just been through a year of commemoration and interrogation of a particular revolutionary moment in this island’s political history. We had critique of the legitimacy of anti-colonial violence and the nature of the state’s foundation. We debated the legacies of partition, the relation of church to nation, as well as our failures to give real meaning to republican notions of equality and solidarity. We had demonstrations of what it means to be among conservative Ireland’s others: woman, Traveller, LGBT, migrant, homeless. Far from being anti-Catholic or unpatriotic, such continuing reflection on the State’s origins, institutional nature, political economy and social exclusions is minimal to any approximation of progressive society.

The legacies and structures of Israel’s founding dispossession can be no more immune from analysis than those of the extermination and enslavement upon which the United States was built, the forced labour and patriarchy which underpin several Gulf monarchies, or any other forms of institutional discrimination. Scholarly analysis of state structures that constitutionally privilege one particular group of citizens over another is far from equivalent to inciting hatred against individuals or communities on the basis of their group membership.

After 50, 70, 100 years, it is imperative to re-examine how Israel’s constitutional order treats it non-Jewish citizens internally and the Palestinians under occupation and exile externally. It is a matter of urgency to think clearly about the impact this has on possibilities for equality and justice. The Israeli far-right, already in the ascendancy on the back of eight years of passing increasingly discriminatory laws, has been freshly emboldened by Donald Trump’s election and the appointment of a staunchly pro-settler ambassador.

In the context of escalating far-right offensives against academia in the western world, it is vital that the campus be defended as an essential space for questioning dominant narratives, critiquing sites of power and offering progressive alternatives. Ultimately, if the Cork conference can be said to be underpinned by any single motivation, it is that of decolonisation, not demonisation. What will a just decolonisation – of lands, laws, minds, institutions, education and more – look like in Israel and the Palestinian territories? How can it best be realised by the peoples there? Will international law help or hinder? These are weighty and complex questions, which require the space for serious intellectual inquiry that the university exists to provide.

John Reynolds is lecturer in international law at the National University of Ireland, Maynooth